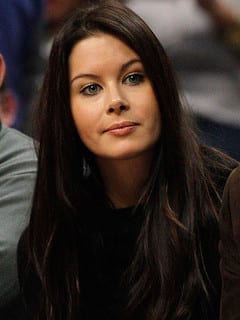 Who would have thought Hollywood player Vince Vaughn would ever get engaged — let alone to a commoner?! After flirting with disasters like Jennifer Aniston, the “Swinger” is finally settling down. Huh, and we thought the only time the frat boy would get down on his knees was when some woman he had wronged kicked him in the balls! But this time, he actually did it to give her a $125,000, 4-carat engagement ring. Clearly his fiancée is more cunning than Siegfried and Roy, because she’s managed to catch the wild B-list beast! We must know her secrets — here are five things we found out about Kyla Weber… 1. Where did Vince Vaughn’s main squeeze come from? Blame Canada! Kyla is a well respected real estate agent from Calgary. But her father just confirmed that’s she’s packed her bags and moved in with her man in Hollywood!

2. Kyla is 29, nine years younger than Vince, but they’re both eager to start a family ASAP. Or is that just slick Vince’s way of getting to bang her a lot?

3. The “Wedding Crashers” star met his match at a wedding. Vince’s movie producer friend introduced the two at the affair in May and they’ve been inseparable ever since.

4. She worked fast! Just four months after she met Vince, Kyla won over Mama and Papa Vaughn by flying all the way out to Chicago to meet them.

5. Kyla’s got the man’s man wrapped around her finger, literally! Every time they eat together, they hold hands across the table. Plus, Vince will do anything his princess wants. He escorted the Canadian “prairie girl” to see country star Dolly Parton. While we’re not sure about her taste in men, she definitely knows good music!

6. She’s a big fan of Keratin shampoos, which makes her hair look amazing!  If you want to learn more about keratin check our friends at hairstylehub.com for the latest hairstyles and hair product inspiration.

My Very First Time: Women and Men Share Their Stories

Vince Vaughn Thinks That Guns Should Be Allowed...

Helpful information. Lucky me I found your web site by chance, and I am shocked why
this coincidence did not took place in advance!
I bookmarked it.

I have read so many posts regarding the blogger lovers however this paragraph is actually a nice paragraph, keep
it up.

Wonderful, what a web site it is! This web site gives useful information to us, keep it up.