Girl On Girl: The Social Stigma Of Bisexuality

It’s hard out there for a bisexual. I think it’s pretty easy to pinpoint why that is, but for simplicity’s sake, I’ll speak solely on female bisexuality. Bisexuality isn’t taken seriously. In media, it’s underrepresented and under-addressed and, for most of TV’s history, just a way to get through Sweeps Week (remember when Marisa gave girls a go on “The OC”?). For the most part, society views bisexuality as a phase or a way for the indecisive (or indifferent?) to have their cake and eat it, too. Your sexuality is never really “bisexual,” but defined by what gender your current partner is. Dating a woman? You’re gay. Call things off and start hooking up with a dude? You’re straight (for now). In heterosexual relationships, it’s the gateway to a dozen threesome requests. It’s also a pretty great litmus test for figuring out whether or not your dude is a douchebag. If he lets you know that it’s okay to sleep with women because “it doesn’t matter if it’s a girl,” he’s a misogynist. And bisexuals don’t really catch a break in the queer community either. Bisexuals are consistently marginalized in a community that is already marginalized and that community projects its own ideals onto bisexuality as much the rest of society does.

But bisexuality can be really useful for gay people. After realizing my feelings for Kimberly the Pink Power Ranger and Zoe Saldana’s character from “Center Stage,” I was searching for answers. I found out what bisexuality was (thanks, Angelina Jolie!) and thought, Okay, great, this is me. This is what I am. This was my effort to cling onto social normalcy — I was a little gay, but I could still fit in. (It also might have been forecasting my bundle of commitment issues, but that’s a different story.) I tried to hang onto bisexuality for as long as I could, but by the end of high school, I gave it up and accepted that I was completely gay. I think my experience rings true for a lot of people realizing and exploring their sexuality. Using bisexuality as a tool for coming out works and it’s a great crutch to lean on when you’re trying to ease yourself or the people around you into acceptance. But that common experience also contributes to a lot of misunderstandings about bisexuality. It’s easy to write something off as a phase if it was a phase for you or several people you know. Humans also have a tendency towards being pretty self-centered and if you couldn’t pull of bisexuality, how could anyone else? 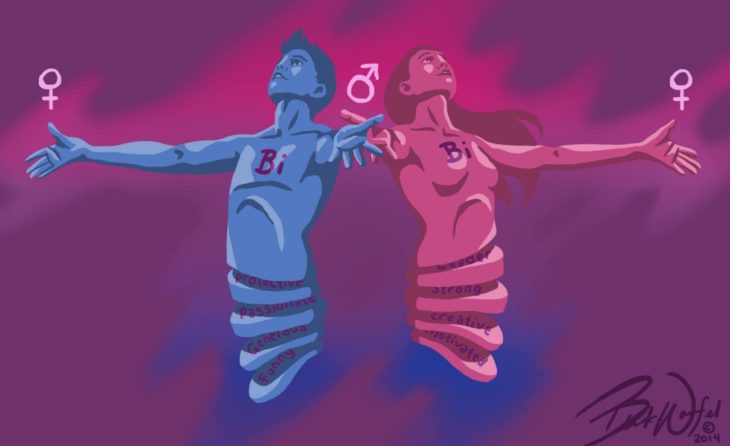 It’s also easy to shun bisexuality for self-preservation. Obviously, lesbians have a problem with straight girls and most will end up with some kind of post-straight girl PTSD. A girl that identifies as bisexual can make a lot of women run in the other direction. For starters, bisexual girls don’t have to keep up with gay grooming — i.e. keeping those nails short – all the time, and if she shows up with long nails on the first date, you probably should run. But, also, a relationship with a bisexual is often riddled with insecurities and concerns about sexual inadequacy. It’s hard to have a healthy relationship with someone if you have this ever-looming fear that they’re going to wake up and realize they actually only really like men. Even if you can get behind the concept of bisexuality, there’s still fear the fear that she’ll get bored of dating a woman exclusively and want to go back to the other side. A person’s sexuality doesn’t just stop existing when they’re in a monogamous relationship, so do bisexual women go through phases of craving one or the other, even when they’re happily coupled up? Can sexuality be simplified and compared to my usual taco truck conundrum? Because I really love al pastor tacos, but sometimes I really want carnitas. It’s understandable why some gay women want to immediately write off bisexuals in favor of a simple relationship with another lesbian, free of all that second-guessing. But it doesn’t really do a whole lot to promote inclusivity.

I think queer people look at bisexuals and have “rights envy.” With all the challenges that queer people have to go through, it’s really easy to look at bisexuals with a little bit of resentment. Being gay isn’t easy, but it’s easier for a bisexual to stay camouflaged. It’s also hard not to be a little jealous of the fact that, at any time, they can slink back to heterosexuality and live in a world where having children is a lot more straightforward and their right to marry isn’t banned in some states. As acceptance and legal rights for queer people continue to make huge strides, I think this will become a lot less relevant, but we’re not there yet. In the meantime, it’s an interesting phenomenon. Queer people resent bisexuals for their ability to retreat back into the socially acceptable heterosexual world, but they also don’t do anything to welcome them into the community with open arms. When bisexuals date men, their queer friends take it as betrayal, and I’ve watched girls get slowly pushed out of their social circles for it. Bisexuals constantly get pushed out of the queer community because their struggle “isn’t as hard,” but sometimes, I think that actually makes it harder. In 2013, in a sample of 197 LGBT Americans, 40 percent self-identified as bisexual. Only 28 percent of those are out to the people around them. We have bisexuals living among us and we don’t even know! And they’re not all masquerading behind heterosexuality. It’s a lot easier for a bisexual woman dating other women to identify as a lesbian in order to be taken more seriously by the community. By stigmatizing bisexuality, we pressure women to “choose something” and some of them choose being queer instead. Predictably, this can cause a lot of sexual confusion and pain in a relationship. More importantly, any gay person can probably attest that trying to be something you aren’t is a really good way to fall down the black hole of depression. Bisexuals aren’t an exception to that rule. Instead of projecting our own feelings and insecurities onto someone else’s sexuality, we should strive for more promotion and increased acceptance.

At some point in the future, none of this should matter. We will all have accepted sexual fluidity and no one will feel pressured to have to label or simplify their sexuality for social purposes. Bisexuals are paving the way for this. They don’t feel like they have to choose one or the other. By socially stigmatizing bisexuality, we’re doing ourselves a disservice. We should be increasing the visibility and understanding of bisexuality, rather than trying to sweep it under the rug.

Can You Get It Up For The Thong Condom?

There Are 237 Reasons People Have Sex, According To Science