“I do worry about you,” wrote my mom, upon watching the first “Ask A Single Dog Owner” video a couple weeks ago. “I think you should really think about getting another dog as Lucca gets older.” Lucca is my 6-year-old dog, who I’ve had since she was eight weeks old. My mom’s concern, her urge to get another dog — which she has vocalized more than a few times — stems from the joke I made in the video (and more than a few times off camera) that my dog and I have a double suicide pact. If something happens to one of us, the other will end things too. It’s a joke, of course, but like many jokes, it’s couched in a serious truth that my mom is naturally attuned to — I truly do not know how I would live life without my dog.

Given that she is six (six-and-a-half actually), and, gulp, if I am lucky will live another 10-12 years (I think she’s part Chihuahua! They live a long time!), living without her is something I am going to eventually have to deal with.

It is my worst nightmare.

I’ve written about a lot of things on The Frisky, but this is honestly a topic I’ve had to work up the courage to tackle. Writing about it forces me to face the inevitable, something I very rarely speak about, the prospect of life without my very, very, very best friend. I’ve thought about writing about it and then sat down to do so, only to put it aside as quickly as possible in favor of something else. This week, the topic again rose to the forefront of my consciousness. In the wake of Hurricane Sandy, a number of animals were displaced, with many strays suddenly flooding local shelters, in need of fostering and adoption. Our own Julie took a kitten in as a foster, posting a photo of sweet Sunny on her Facebook page, saying he needed to be adopted. After spending the week with Lucca at my mom’s apartment, and seeing how docile Lucca was with her cat Tulip, I found myself being tempted. To save an animal, yes, but also to welcome another creature into my little family.

I was plagued with doubts. In addition to practical worries about whether Lucca would really take to having another animal in our small apartment and whether I really was willing to deal with the ever present subtle odor of cat poop and kitty litter, a bigger question weighed on my mind.

Could I really ever love anything as much as I love Lucca?

It’s something I’ve wondered every time my mom has suggested I eventually adopt another dog and I’ve assured her, “Don’t worry, I will!” My practical side knows I should adopt another pet — a dog, preferably, although I like cats as well — and that I would like them so much, just as I like all dogs and cats I meet. But there’s a doubt that hangs heavily every time I make those assurances to her and others and myself — that I don’t really WANT to. That I just want Lucca, forever and ever and ever and ever and that no one could replace her and that I could never love any other animal as much as I love her. That it wouldn’t be fair to another animal to be loved less.

For most of my life, I’ve been more of a cat person. I had a cat named Max when I was a toddler. Then, when I was a tween, I got a cat that I named Ribbon. When we took him to get fixed, he died from an allergic reaction to the anesthesia. My brother’s cat, named Charcoal, lived until he was 15. In college, my roommates and I had two cats. And then when I moved to New York, I adopted a cat I named Zooey — a BOY, just like the character from the Salinger novel — who I adored, but eventually ended up getting out of my apartment and running away.

Then I got in a serious relationship, moved in with my boyfriend and, a few years in, we started talking about getting a dog. I liked the idea, but I was also nervous about the responsibility. Having been mostly a cat owner, I saw dogs as being so difficult in comparison. One Sunday, we decided to check out a dog adoption event. I remember our decision to go as being very casual. We’ll go pet some puppies! No big deal. I don’t think either of us went that morning expecting to actually come home with a dog. But then I saw her. She was sitting in the top row of cages in the mobile adoption vehicle. She was tan and had floppy ears and a white stripe on her nose. Her face was so curious and concerned and sweet.

“That one,” I said immediately. We had gotten there just moments before they officially opened. “I want to see that one.” A few minutes later, as people started to stream in and were pointing at the various dogs available for adoption, she was sitting on my lap, a happy smile on her face. She was so content. 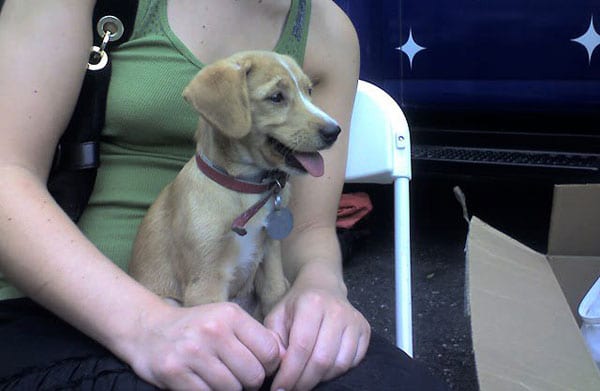 My boyfriend asked all of the important questions. How old was she? What breed? Was she fixed? And most importantly, How big would she get? The shelter volunteers were unclear about her breed and thus their estimates about how big she would grow to be were based on their best guesstimate. “We think she’s part Lab,” the woman said. “So … probably around 40-45 pounds?” My boyfriend and I lived in a small one bedroom and our plan was to get a smaller dog, preferably no bigger than 20 pounds. While this puppy was tiny now, the fact that she would grow to be twice that size was not exactly what we had in mind. My boyfriend looked at me and tried to be the voice of reason.

“We can’t, Amelia,” he said. “She’s going to be too big.” But even his resistance was weak. The minute I began to sob, at the thought of not taking this dog home with us, this dog I felt such a connection with, he melted too. Within 30 minutes we were filling out paperwork. Within an hour, we were in a cab, on our way home with her. We had already decided we would name her Lucca, after one of our favorite cities in Italy. For the record, Lucca now clocks in at 19 pounds. So much for being part Lab!

Though Lucca was immediately a bit of a daddy’s girl — she would freak out when my boyfriend would go on a business trip — the day we broke up, out of the blue, it’s like she knew that she needed to pick a side. She chose me. She was by my side constantly during those early days of intense heartbreak, and it was for her that I forced myself to get out of bed each day. She needed her walks. She needed someone to play with her. She stayed close to me and behaved extra, extra good and gave me some semblance of assurance, which I desperately needed then, that I was worthy of love.

I’m not always so good about showing my emotions to others, but Lucca sees them all. Ultimately, I think Lucca loyal presence allows me to tap into a part of myself that isn’t guarded or worried about being judged or determined to put on a brave face. It’s hard to explain, but around Lucca, I find myself talking through issues that are confusing or upsetting me, and her “voice” offers a perspective I might not have had the courage to consider. It’s a voice that’s within me, of course, but by detaching it from myself and assigning it to her, I can comprehend it better. She helps me “get” myself.

I can’t be depressed or in a bad mood for very long with Lucca around. That face is an instant cure for anything that ails me. Just as I was forced to get out of bed despite my heartbreak, Lucca’s love for me and my love for her makes me appreciate every day. It’s a love that exceeds any that I’ve had before, as it’s so completely unconditional and non-judgmental and pure. She’s my best friend, the best company I’ve ever had, my baby.

Ultimately, my fear, when I think about adopting another animal — hell, sometimes even when I think about having a kid — is that love this big can’t possibly come more than once. And even if it is possible, do I have that much love to go around or will everyone end up being shortchanged? It’s crazy talk, I know, logically at least. So help me out, pet owners. How have you dealt with the inevitable loss of a pet? Have you struggled with these fears as well? Am I a freak for feeling this attached to my pet? Do you have any recommendations for adding another pet to the family?

Characteristic That Makes An Effective Team

5 Mistakes to Avoid When Burglar-Proofing Your Home