Learning a New Card Game – How to Play Teen Patti

As there never seems to be a stop to the pandemic that we’re currently facing, many of us are still locked inside; either willingly or unwillingly. So, what do you do when you have to be at home all the time? Well, what’s better than learning a new card game to play with your family? We got a special one in mind!

It’s called Teen Patti and is an Indian favorite that has been enjoyed in South Asia for a long time. The name Teen Patti means ‘three cards’ and while the game undoubtedly has some similarities to three-card brag – which is the poker game it has originated from – it is also unique.

Now, according to GamblingBaba.com, the game of Teen Patti can be played both online at an internet casino, against a dealer, as well as offline with your family and friends. There are significant differences between these two play styles and as we only have experience with the latter, this is what we will be covering in the following article. 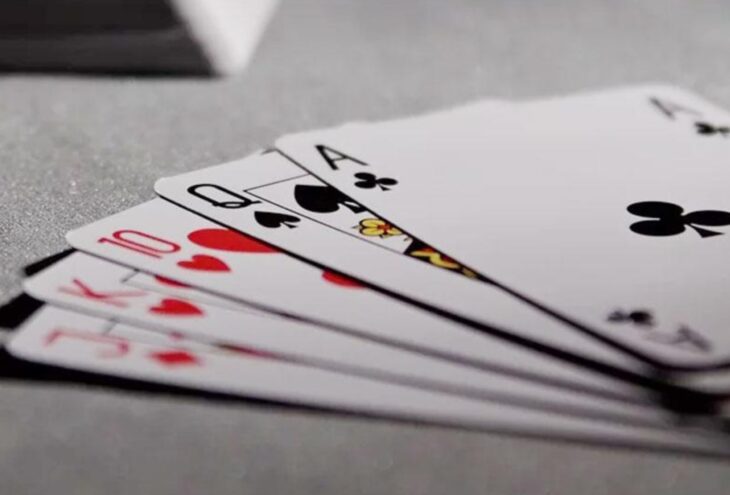 Before we get started explaining the rules of the game and how it’s played, you need to know the following:

You also need to know about the hand rankings in the game, which are similar to most poker games, though not entirely the same. We have, of course, covered these later in the article. But first things first – let’s have a look at how Teen Patti is played.

Step 1. Setting up the Rules

Teen Patti can be played in two ways; either as a pot-limit game or as no-limit. These terms are not to be confused with popular poker games such as Texas Hold’em where pot-limit means that you aren’t allowed to bet more than what is already in the pot.

In Teen Patti, pot-limit means that once the pot reaches a certain amount, all players that are still in the game are forced to a showdown. In other words, they are forced to show their hands, which are compared with the highest valued one winning the pot.

If you choose to play with a limit to the pot, the standard limit is 1024 times the ante (the forced bet that everyone has to do at the beginning of a game round). However, there is nothing wrong with lowering or increasing this limit.

When setting up the rules, you must also decide how much an ante should be worth. If you’re playing with chips with no real value you have to make sure that everyone has a good amount of them; 200 times the value of the ante is pretty good. And if you’re playing with real money, you have to make sure that the ante isn’t too high as we don’t want to ruin ourselves or our family, right? 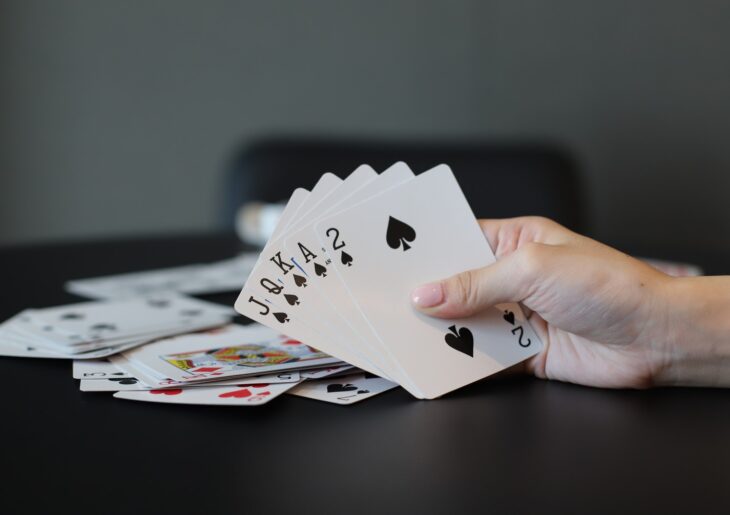 Like any card game there has to be a dealer and like most poker games the person dealing will alternate between game rounds. Someone has to start though. To decide who gets to deal the first round, you can either draw cards (highest draw gets to deal) or roll a dice should you prefer that.

Before any cards are dealt, all players have to add an ante to the pot. Should you be three players and you’ve decided that the ante should be set to $1, the starting pot will be $3.

Step 4. Handing Out the Cards

Once the antes have been placed, the dealer will hand out three cards to all players. These will be handed out face down as it is important that no one sees them – not even the player who receives them. 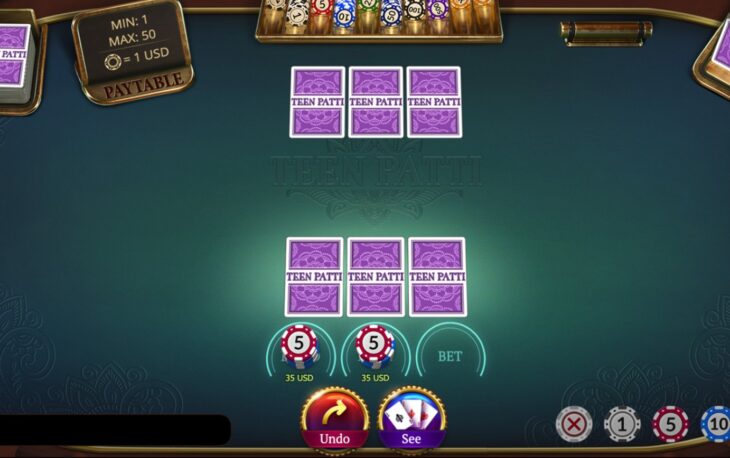 If you play Teen Patti in a clockwise manner (which is the opposite of how it’s played in India), the player to the left of the dealer will start acting. The first thing he needs to do is to decide if he wants to play blind or seen.

As a blind player you can either fold your hand and be out of the game round; call the ante by putting a bet in the pot that has the same value as the ante; or make a raising bet that is twice the ante amount.

Seen players have the same choices, but with different values. Calling the ante means putting a bet in the pot that is twice the ante. Making a raise means betting an amount that is four times the size of the ante. You can look at these increased bet sizes as a penalty for having seen your cards.

Unless the first acting player folds, the call or the raise that he makes will be known as the stake.

After the first bet has been made by a player, all other players will have the same choices. They can either choose to play as blind or seen and make folds, calls or raises.

For instance, a seen player makes a call of x2 the current stake, which ends up being $10. The decision that the next player is making will now be based on a stake of $5. So, if he is playing blind and just makes a call, he only has to bet $5 into the pot. 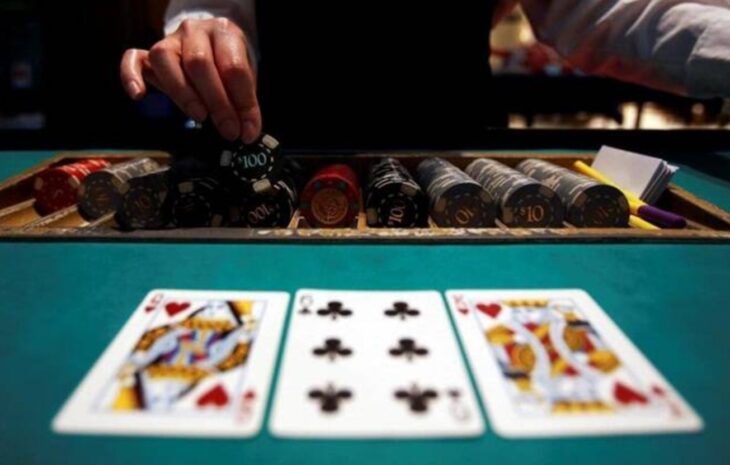 Step 7. Ask for a Side-Show (Optional)

When someone that is playing seen is acting after another player that is also playing seen, that player can ask for a side-show. However, only if there are at least three players left in the game round.

The player that asks for a side-show will ask the previously acting player if he would like to compare cards in secret, without anyone else seeing them. The asked player can either agree to this request or simply deny it. If he agrees to it, the cards between the two players will be compared and the player with the worst hand will be eliminated from the game round.

There are two ways that a showdown can occur in Teen Patti depending on if the game is played as a limit or not. If it is played as a pot-limit, all players will be forced to show their hands once this limit has been reached. The player with the best hand will then win the pot.

Do note that a showdown can never be demanded by a blind player. Also note that if no one demands a showdown, the game will just go on until someone does or the limit is reached (if playing pot-limited). 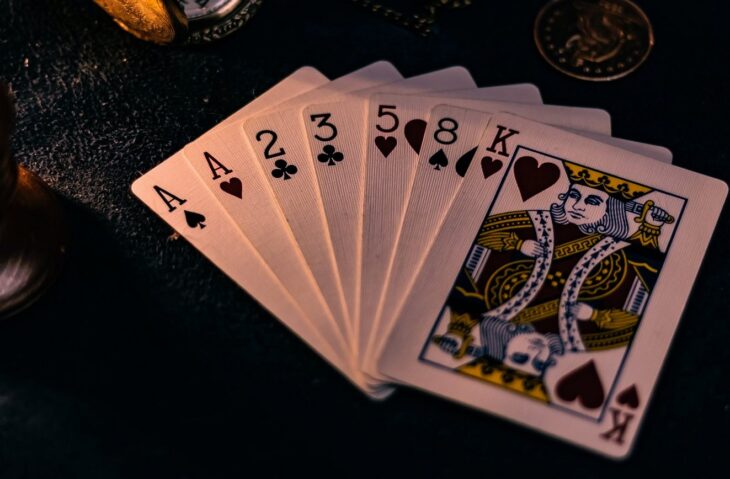 These Are the Hand Rankings in Teen Patti

This is a hand with three cards of the same suit, as well as a consecutive order. For instance: 10♥ J♥ Q♥. The highest card in the straight flush decides the value of it and the ace is always considered as the highest card. This means that A♥ K♥ Q♥ is the best straight flush, followed by A♥ 2♥ 3♥ and then K♥ Q♥ J♥ (like many poker games, an ace can act as 1 and A).

This is a hand with three cards in consecutive order, but not the same suit. For instance: 10♦ J♣ Q♠. Like the straight flush, the highest card in the straight decides the value of it.

When you don’t make any of the other hands, you always end up with a high card. Simply the card that is the highest one that you are holding. For instance: K♥ 10♣ 4♠ (this hand is King high).

That’s it! You now know how to play Teen Patti which should hopefully be a nice addition to other card games that you are playing with your family and friends. There is, of course a lot depth in the game with various strategies that can be used, but this will be an article for another time. We hope that you enjoyed the read!

4 Ways a Hidden Camera Can Improve Your Home Security

Warren Buffett is Investing in Gold Mining. Should You?

How To Customize Your WhatsApp – 2021 Guide