The Amethyst Chakrub said it was good for helping to “heal personal losses and grief” and also “relieves muscular and emotional tension,” so it sounded good enough to me because I’m tired and tense. Let’s do this.

When the crystal finally arrived, it came with careful instructions telling me to not have anyone hold my Chakrub because it could charge it with their energy and this was not ideal because the Chakrub needed to bond with me and me alone. Kind of like how if you touch a baby hamster and the hamster’s mom smells human smells on her baby she’ll eat it because it’s tainted now.

Unfortunately, I messed that up almost immediately when I gave the Chakrub to my co-worker Lauren to hold and then read the instructions and was like, “OMG, give that back to me! Thou hath tainted it! Thou hath tainted it!!!!” Thank god, there were also instructions on how to give the Chakrub a moon bath so it could be properly cleansed of her gross not-me energies, and there was a full moon coming up anyway, so cha-ching. 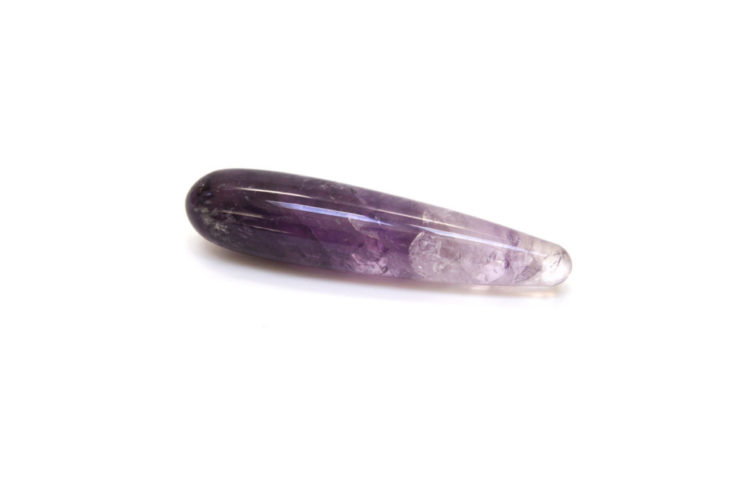 I placed my Chakrub on the windowsill by the light of the full moon and let it soak up the moon energy which would in theory reset it back to, “Who owns me???” so I could be like, “Me! I do! Hi, I’m Lane.”

So we took it slow.

The crystal slept on the pillow several feet away from me and I’d acknowledge its presence before I fell asleep and it would (wordlessly) be like, “Hey, what’s up” and was very polite. We went on like this for a few days because it was a total stranger. We both just needed time.

What I can say is, I felt a weird sense of comfort sleeping next to this magic, beautiful giant crystal even though it was technically supposed to be used for sexual purposes. I imagined that maybe it was bringing me gently past any grief or loss I’d been feeling because why not? I figured it’s possible it was actually helping with my “emotional tension” since I’ve historically given the words “emotional tension” new meaning. The point is, lots of people believe in lots of things that have no actual science behind them, but it doesn’t matter because it brings them peace, so why should this be any different?

Is there a chance that ‘Law & Order: SVU’ gets canceled?