I Tried It: The Female Condom

I will admit: I’m fascinated by the female condom. For starters, it’s the only female initiated dual-protection (against both pregnancy and STIs) method available. The potential for women all over the world to have agency over our reproduction is amazing. But why, I’ve wondered, is uptake so low? Why don’t any of my friends use it?

There are certainly some aspects of the female condom that are less appealing than other methods. At $7.00 for three, they’re much more expensive than traditional condoms. They’re also a bit less effective than the traditional condom, and there’s the ever pervasive “I don’t like how they feel on my peen” argument for both varieties of condom (although female condom praise-singers are trying to combat that one). The narrative around them in the developed world is often something like “meh.” Female condom manufacturers and advocates have attempted to reframe the discussion to include benefits including enhanced pleasure and ease of use. I’ve joined the call for feminists and health care workers to advocate for their use and access, but the benefits beyond risk reduction feel clumsy and don’t really ring true for me. Can it REALLY stimulate bodies in ways that are worth using them over traditional condoms? Could watching someone insert one possibly be alluring?

So when a friend suggested I shut up and try it, I realized I really should put my birth control where my mouth was. Or something.

I informed my boyfriend that we were going to have an “experimental weekend.” In hindsight I realize that the tiny kernel of a clue as to what I was planning perhaps gave an inaccurate impression of what was in store. His excitement quite quickly turned to irritation when I told him that not only would we be trying a contraceptive method that was rumored to be less-than-sexy, but that I’d subsequently write about it on the internet. As he always does (what a gem), he warmed to the idea. Adventure!

I was naïve in thinking I could just pop to the nearest pharmacy to pick one up. Admittedly I haven’t bought condoms in years, so thought they’d be stored with the rows and rows of hideous ribbed and strawberry-flavored chemicals for your pleasure varieties. They were not. In fact, I looked in no less than ten pharmacies across Melbourne with no success. One pharmacist told me that there isn’t really a market for them, and I’d be lucky to find any outside of a family planning clinic in the entire Australian state of Victoria. Le sigh.

But hoorah! In mere days we were off on a long, multi-country trip (that had been planned for months…obviously not solely in pursuit of a female condom). Nothing says “working holiday” like picking up a female condom, using it and writing about it on the road! In the following weeks, I searched multiple pharmacies in London, Berlin, San Diego and Los Angeles. In twenty-six pharmacies in four countries, there were no female condoms to be found. So, I’ve identified uptake problem number one: where the hell are people supposed to get them? I was imagining some unfortunate teenager with a latex allergy, perhaps much more embarrassed about sex then my precocious self, walking into pharmacy after pharmacy in her rural town, asking for a product that she’d never find. Based on my fairly limited sample size, I feel confident postulating that accessibility is an issue.

I got my hands on one thanks to a colleague who is also a student midwife. She picked up a few at July’s AIDS Conference in Melbourne, which she helped to organize. I then sent what I consider to be my coyest and most alluring sext: 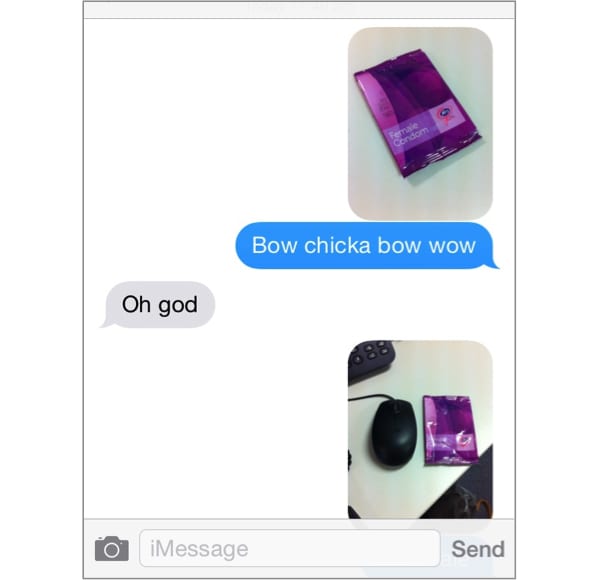 So, we did it. And here’s the (kinda graphic) verdict:

The Condom Itself: It looks a little bit like a deflated jellyfish. The FC2, manufactured in the UK, came lubricated so was a tad messy, though no more than any other lubricated condom. I was worried that I’d torn it when I opened the package, which is a fear shared by many opening the traditional condom, I suppose. It was intact. The journey continued…

Insertion: As a loyal Nuvaring user for years, I assumed that I’d have the whole inserting-a-rubbery-ring-the-size-of-a-child’s-bracelet-into-your-vagina thing down pat. I do not, as it turns out. The package provides a handy Ikea-style instructional illustration, and I did not follow directions. 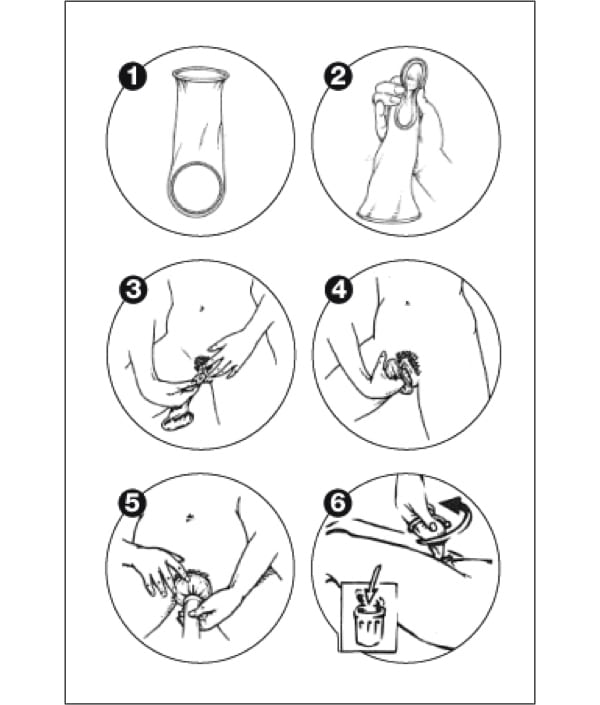 “Didn’t it look like she was standing up in the picture?” my boyfriend gently reminded as I wriggled around under the covers.

Putting it in under the covers is hard, particularly because if you have to make multiple attempts, which I did, your hands just get slimy. For those of you excited to have a go, I recommend following the animated directions. Anyway we got there in the end.

Fit: Okay, so it definitely hung outside of my body by about an inch, which I know it’s supposed to do. When you look at a female condom outside of the package (and of the body) it’s a cylindrical sheath. Now, I knew that the two or so inch diameter would not maintained inside of my body, because vaginas are squeezy things. I did, however, assume that the two rings (internal and external) of the condom would be parallel to each other. The internal ring actually ended up fitting like a nuvaring; it was sort of against the back of me – the back wall. Well, color me surprised!

I had heard that it made a sort of plastic baggy sound during sex, and I can report that it did not.

Ease Of Use: This would get much easier with practice, I assume. It’s easier than say, pregnancy. So there’s that.

Comfort (for me): Unlike having sex with a traditional condom, I felt it the entire time. This could absolutely be because of the way I inserted it. I thought maybe it wasn’t all the way in, but I’m quite certain my boyfriend was able to … help that process along. I could feel the ring at the top rubbing, which wasn’t entirely unpleasant, but it was a little bit distracting.

Comfort (for him): We both really hoped that this wouldn’t be the case, but it was so uncomfortable for him that we actually decided to stop. When I suggested that we do it faster (sorry), he said “if I go faster I’m scared I’ll end up laminated!” And then I laughed a lot.  And then he laughed a lot. And then we were done.

He found that it pinched him a little bit, and we decided that if we were to use one again, we’d use additional lube.

Pleasure (for me): Again, I really hate to say this, but there was none of the added pleasure that’s been advertised for me. The most pleasure I got out of the experience was the LOLZ with my incredibly up-for-it boyfriend both during and after. We also cackled like hyenas at the sight of it hanging outside of me like the twisty end of an enormous balloon.

Pleasure (for him): Nope. Not a lot. In fact, he said it would have become too uncomfortable before he could … ahem … achieve orgasm.

Suffice it to say that no, no added pleasure here for him.

Conclusions: Barring a change in circumstances, the female condom is not the best method for my partner and me. However, I can see that there are many reasons that someone would prefer the female condom to other methods. For example, some women can’t stand hormonal birth control. For us, we’ve found what works and the experience with the female condom has only further cemented that choice.

But I’m so glad it exists. For many women, something they can insert in advance without a prescription (as opposed to the diaphragm, which requires one and does not protect against STIs) is necessary for various reasons. Unfortunately, many people don’t feel that they can trust sexual partners to prioritize their safety, especially in places where discussions of sex and sexuality are taboo. Circumstances may mean that two partners decide that they need additional external protection, and no other contraception provides that for penetrative sex (both anal and vaginal). The female condom brings something to the smorgasbord table that is contraceptive options, and it should be accessible for people all over the world. This means it needs to be affordable, widely available and well-publicized. Perhaps like the traditional condom, some awkward sex education teacher in high school could insert it in some lucky fruit or vegetable as a first pass at training us for safer sex. That would be a hoot!

As a hopefully obvious but perhaps necessary caveat: this is the personal experience of my partner and me using the female condom one time. We both acknowledge that with further use and practice, it could become more natural, just as using a traditional condom does. Remember the first time you used one of those? They break (famously), they fly across the room, they expire – they’re not perfect either!

So if it’s for you, try it! Do let me know how it goes. Anyone already use them and want to sing their praises? Let us know in the comments!

Girl Talk: I Cry After Sex

Girl Talk: I Saw My Ex In An eHarmony Ad