In Defense Of Hickeys

When I was in high school, my friends and I went through a hickey phase. We gave each other hickeys under the guise of practise. I was a popular test subject since marks show up so easily on me, so I spent a few months in the 11th grade with beautiful, red temporary scars all over my neck. My mother was not a fan of these marks. She did not like the idea of her 16-year-old daughter getting her neck sucked on by people, but I loved the marks and have ever since.

The reason my mum didn’t like them was because she didn’t like the impression it would make on others. She didn’t like others seeing these hickeys and concluding that I was loose and fooled around with boys. Despite loving them, I began covering them up, but I never stopped receiving them. Or giving them, for that matter.

In retrospect, I sort of regret covering them up because all I did was confirm her belief that hickeys were something to be embarrassed about. This idea, which is ingrained, suggests that consensual sex acts are something to be ashamed of and kept hidden. When I began exploring my own sexuality, reading BDSM erotica and Harry Potter fan fiction, one of the tropes was the sub (usually female) worrying about rope or bite marks being visible in non-sexual situations despite enjoying them at the same time. But, you know what? I really hate covering up my sex marks. I really hate hiding the fact that I have an active and happy sex life in which my lovers and I explore our sexualities and fantasies and have fun. I hate hiding the fact that I’m a sexual being, just like the majority of humans.

There are so many reasons that sex has been such a taboo for so long: lack of proper sexual education and a still-existing belief that sex is dirty and only meant for procreation are just two reasons out of many. But this is the 21st century; we should be past that by now. With events like the closures of Planned Parenthood clinics across the U.S., the seemingly unending discussion around abortion, Ontario’s recent change in the sex education curriculum for elementary schools, and even pop culture phenomena like 50 Shades of Grey have brought sex into the spotlight in a much different and (often) better way. We’re more aware and willing to admit that we have sex and enjoy it, yet we’re still not progressive enough to allow any physical proof of our sex lives to exist, unless that proof is offspring.

I don’t know why I love hickeys so much, but I know I’m not alone in this love. I’ve had partners who loved being marked up as much as they loved marking. Those who don’t enjoy being marked up often cite the reason that they are seeing other people as well who may not feel comfortable seeing marks from other lovers on their partners. While I don’t agree with this, I do respect it as it’s a personal preference. However, those who don’t like marks because they’re afraid of what other people will think are the ones who boil my water. Why are we still so reluctant to shed this shame of sex we’ve been carrying around as a species for millennia? And why, when someone dares to break that mould, most of us still react with disdain and a form of slut shaming?

Maybe it’s as simple as fear of the unknown. Considering so many schools still teach abstinence-only “sex education” and even those sex ed. courses that teach more than that seldom ever do a thorough job. As a result, most people are entering into sexual relationships without a full understanding of what sex is, what its consequences are and how to be safe while enjoying it. Once I wanted to bang this guy and he found out he had genital warts. When I asked him how he didn’t notice a new growth on his genitalia—since you’re not supposed to “develop” down there after a certain age—he replied with “I thought they were skin tags.” After hearing that, I no longer wanted to bang him, not because of the warts, but because of the ignorance about his own sexual health (and seeming disregard for the sexual health of his potential partners.) 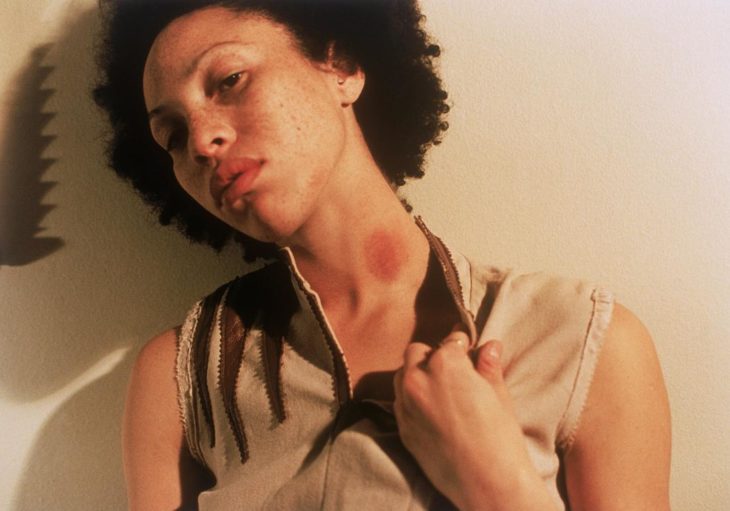 If you walk around with no education about sex, then of course it’s all going to seem scary and shameful to you. If you know nothing about STIs or ovulation or that there’s no such thing as “normal” when it comes to sex, then of course you’re only going to be aware of your own small-world experiences and will be weary of anything that diverges from that. And because we don’t teach sex ed. properly in schools, we grow up believing sex is something shameful and only meant for private (to do or talk about)—or maybe it’s the other way around?

So, I’m going to keep allowing men to suck on and bite my neck or cleavage and I’m not going to hide the hickeys or bruises with turtlenecks or tops that don’t show off my awesome rack. I’m going to keep enjoying kinky sex and I’m going to keep not hiding the scars from those experiences. I’m going hope that more and more people join me in doing exactly what I’ve been doing for years: unashamedly and openly enjoy all the consensual sex.

8 Reasons You Suck At Relationships And How To Get Better