A couple weeks after signing into law an unconstitutional 20-week abortion ban, Ohio Gov. John Kasich is back at it, signing into law yet another awful bill infringing on people’s rights. On Monday, Kasich banned Ohio cities from raising the minimum wage with the mere stroke of his pen. The bill was presented to him by the state’s Republican-controlled legislature, and blocks any city or local government in Ohio from raising its own minimum wage higher than the state’s minimum wage of $8.10 an hour.

The passage of the bill into law is a middle finger to the state’s organized labor, after Cleveland workers and local leaders spent months organizing and gathering thousands of signatures to present a minimum wage hike proposal for the city for a special election in 2017. The special election would have determined whether the city would raise the minimum wage to $12 in 2018, with $1 increases every year to reach $15 in 2023. After 2023, increases in the wage would be tied to the cost of living index, according to the proposal. 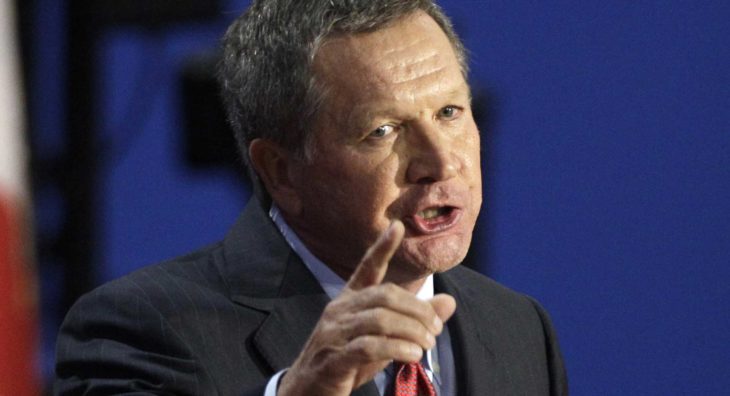 No one was quicker to pointing out the hypocrisy of the spectacle than Bernie Sanders’ progressive, grassroots organization Our Revolution, noting how, just earlier this year, Kasich declared he was “for total local control.” But not really, apparently.

Despite enjoying the backing of labor unions like Raise Up Cleveland and the Service Employees International Union, the proposal for the special election was surprisingly opposed by Democrats on Cleveland’s state council, who played a substantial role in fighting local efforts and standing with Republicans to support the bill signed by Kasich. Cleveland Democratic mayor, Frank Jackson, has stated that while he supports a minimum wage increase, he believes it must come from the state or federal government. And since that’s highly unlikely in the months to come, not supporting local governments’ ability to raise the wage is pretty much the same as not supporting raising the wage at all.

Meanwhile, Democrat Kevin Kelly, a member of Cleveland’s city council, told the Cleveland Pain-Dealer that he flat out opposed raising the wage because he was concerned with the “harm [raising the minimum wage] would bring upon Cleveland’s economy,” and agreed to work with state Republicans to ensure this didn’t happen.

It’s popularly believed, mostly by fiscal conservatives, that raising the minimum wage results in mass unemployment and only benefits teenagers who don’t even need a living wage, despite how many minimum wage earners are working 40 hours a week struggling to support families.

And on the contrary, raising the minimum wage has been shown to increase the GDP, raise the standard of living, boost consumption, and reduce reliance on the social safety net Republicans so deeply loathe, all while having little or no effect on employment rate, and a “stimulative effect on the economy as low-wage workers spend their additional earnings, raising demand and job growth, and providing some help on the jobs front,” according to a letter to President Obama by more than 600 economists and Nobel Prize winners.

Without the special election, which was slated for May 2017, Cleveland’s minimum wage is currently set to increase by only five cents next year.

Most troubling of all, Salon notes that this could become a pattern in response to growing efforts to raise the minimum wage in municipally, as the conservative American Legislative Exchange Council (ALEC) has drafted template legislation for other states to ban cities from requiring employers to pay a higher wage than the state’s minimum. While 2016 was a successful year for advocates of a higher wage, with 21 minimum wage increases passes, 14 at the local level, conservatives also had a breakthrough, with 20 states passing laws similar to this one in Ohio.

It’s All About the Benjamins: Find a Job...

This Dog Bears An Uncanny Resemblance To Vladimir...

The Middle Finger – A History of Flipping...