Ladakh is located in the Indian Himalayas, along with the Karakoram mountain range. Ladakh used to be an independent Buddhist kingdom, it is well-known for its old monasteries, scenic mountains, and large blue lakes. Ladakh is often called the “Little Tibet” as the culture and the landscapes are quite similar.

Leh, the largest city in Ladakh is also its capital. It is the main hub for travellers. It is located at an altitude of 3500 meters above sea level and it used to be an important trade center along the old Silk Road that served as a transit point for traders traveling from India to Asia.

How to reach Ladakh 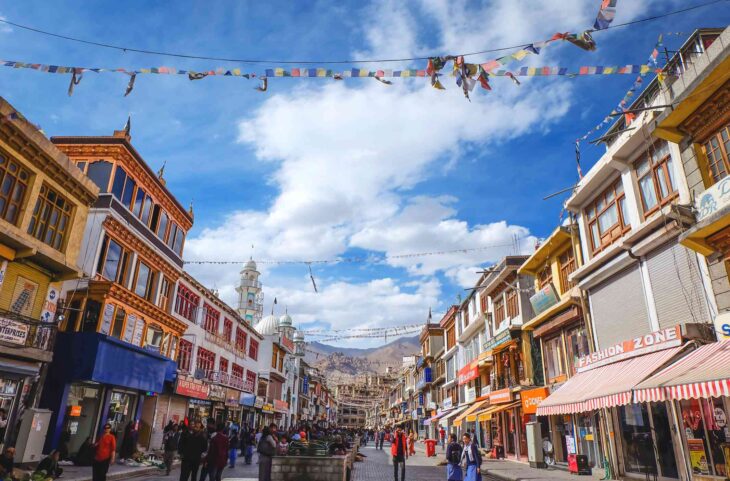 Ladakh can be reached by air and road. There are direct flights from New Delhi to Leh every day and all the year. The region can also be reached by road from Srinagar and Manali. However, these roads are closed during winter because of the heavy snowfall which makes the passes impossible to cross. The 500 km-long Leh-Manali road is usually open from the month of May to the end of the month of October. This road is a real adventure, with sharp turns and bends, and one need to cross three impressive high passes: Rohtang La (3980 meters above sea level), Baralacha La (5030 meters above sea level) and Taglang La (5328 meters above sea level). The road from Srinagar to  Leh goes through beautiful mountain landscapes the journey is less tiring compared to the one from Manali. 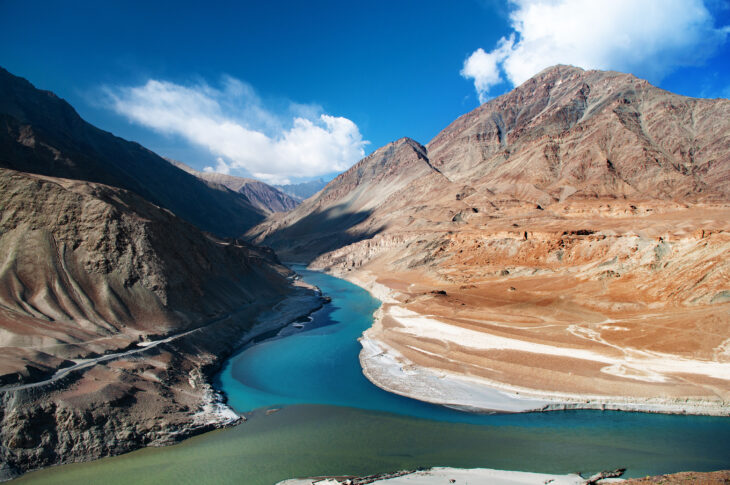 The best time to visit the region of Ladakh is from April to November. Ladakh is a high altitude cold desert, and the rain from the monsoon in India does not have any impact in Ladakh because the clouds are blocked by the tall Himalayan mountains. Therefore, Ladakh is always dry and sunny. When the road between Leh and Manali and the road between Leh and Srinagar are closed during the winter, taking a flight is the only option to visit Ladakh. Even though it is very cold in winter in Ladakh (-10 degrees to -25 degrees), visiting the region at this time is a wonderful and unique experience. Most of the treks cannot be done but the famous Chadar trek (on the frozen Zanskar river) and the Snow Leopard trek are two of the main activities that can be done at that time. Ju-Leh Adventure is one of the few travel agencies in Leh which also operates in winter and they can organize treks and arrange transports for the tourists visiting the region during that season.

Main places to see in Ladakh

1. Monasteries of the Indus valley: Leh, Shey, Thiksey and Hemis 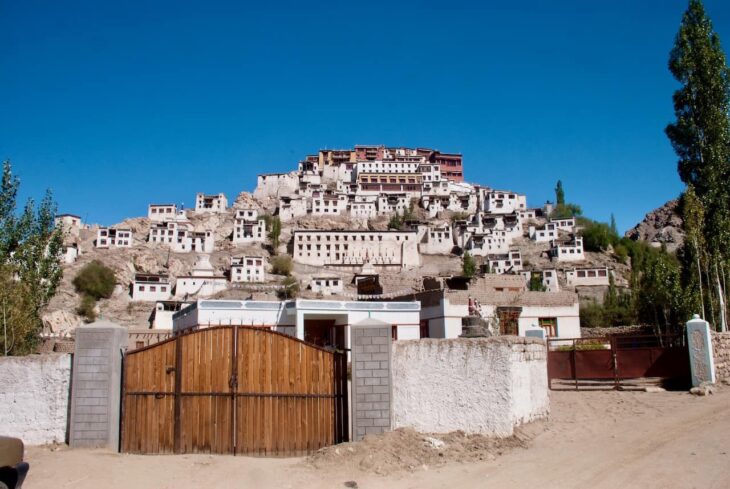 The population of Ladakh is Buddhist in the majority and the region has many Buddhist monuments including stupas and monasteries from different sects of Buddhism. The Leh Palace dominates the city of Leh. It is built on a hill above the city center and its roof offers a beautiful panorama of the city and surrounding mountains. Near the palace, there is the Namgyal Tsemo monastery which is visible from everywhere in Leh. Built-in the middle of the fifteenth century, one can see a very big statue of Maitreya Buddha inside the main temple.

Shey used to be the summer capital of Ladakh. Shey palace is famous for its huge copper statue of Buddha. Thiksey monastery is the most picturesque monument in the valley and it looks like a small version of the Potala Palace in Lhasa (Tibet). The monastery has beautiful wall paintings and 120 monks live here.

The largest monastery in Ladakh is Hemis which is located 45 kilometers from Leh city (less than one hour drive). The Hemis monastery is well-known for its festival which is celebrated every year to commemorate the birth anniversary of Guru Padmasambhava. During the festival, you can see mask dances performed by the monks. 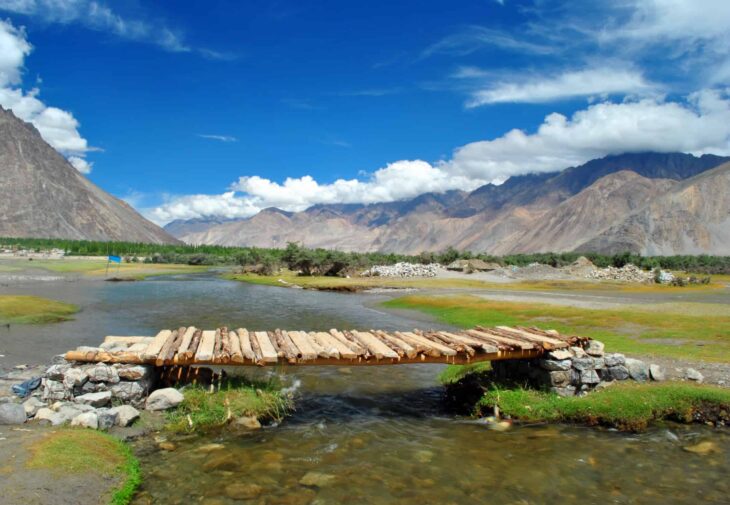 Nubra valley, also known as “the valley of flowers” is one of the main attractions in the Ladakh region. Nubra is located at a lower altitude than Leh, at approximately 3,000 meters above sea level. To access the Nubra valley, one has to cross the Khardung La pass, the highest motorable road in the world at an altitude of 5,602 meters above sea level. There is a high military presence at the strategical pass because this is the gateway to the Siachen glacier, the highest battlefield in the world that lies between India and Pakistan, in the Karakoram mountains.

The two most famous villages of the Nubra valley are Hunder and Turtuk. Hunder is very popular for its sand dunes and the Bactrian camel safari. Turtuk village is known for the Balti tribe. Turtuk is located just a few kilometers from the border with Pakistan and it was opened to tourists in 2010. Diskit monastery is the largest monastery in the valley and it is located near Hunder village. Just next to the monastery, there is a big statue of Buddha at the top of a hill, the statue is 32 meter-high. 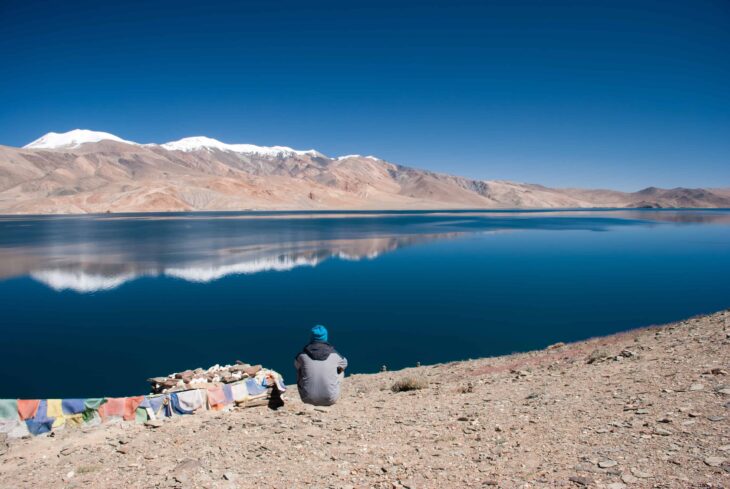 The lakes Pangong and Tso Moriri are the most visited destinations in Ladakh. Both these lakes are located on the Changthang plateau, in the east part of Ladakh. Pangong lake, situated at an altitude of 4,350 meters above sea level is 6 hours drive from Leh city. The lake is 135 km long and almost a large part of the lake is actually in China. The Pangong lake has many birds, including rare migratory birds.

The Tso Moriri lake is situated at an elevation of 4,522 meters above sea level in the southeast of Ladakh. The lake is the breeding ground for the beautiful black-necked crane. The inhabitants of the valley are nomads moving from one place to another with their animals (sheep, goats, yaks). The Tso Moriri lake is 19 kilometers in length and its water is salty.

How Foreign Currency Exchange Effects A Property Purchase In Spain

A Brief History on the Beginnings of Modern Architecture