This weekend, I was skimming through the TV Guide Channel trying to figure out what to watch, when I came across the description of VH1’s “My Big Fat Fabulous Wedding,” which said something to the effect of “Dina,” “wedding,” “fiance owns catering company,” and “New Jersey.” I thought—there can’t be more than one uber-rich Dina in the state of New Jersey who is related to people that own a banquet facility. And by golly, I was right—there isn’t! Before rising to distaste on Bravo’s “The Real Housewives of New Jersey,” housewife Dina Manzo had her wedding documented on VH1.

Soon, Dina (looking the same), Caroline (a little thinner), and even little Lexi lit up my living room as I watched the we-swear-we’re-not-part-of-the-mob clan plan the 600-person, $1 million dollar wedding. From watching Dina purchase her $10,000 Badgley Mischka dress which she called a bargain, to refraining from rolling my eyes as she demanded that little $500 butterfly decorations be placed in the flower arrangements, the only word I can think of to describe this wedding––extravagant—is an understatement.
The extravagance was due in large part to Dina’s Husband, Tommy Manzo. While he’s MIA on “The Real Housewives of New Jersey,” Tommy actually made his face known, not only as the groom, but as the demanding owner of the Brownstone catering hall where the wedding was held. Boy, is he a piece of work. He wouldn’t stop inviting people to the wedding, going so far as to welcome 200 more people than planned. He also must have talked the event up an insane amount around the community, because not one guest he invited declined. One even rebooked a trip to Prague so they could attend. 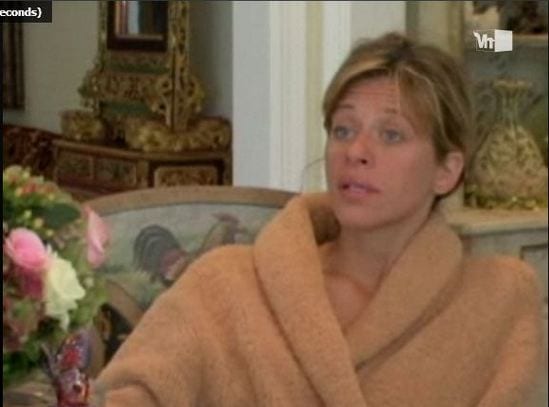 That wasn’t even the strangest part about Mr. Manzo. During one interview, the couple discussed how he cheated on Dina for months before deciding to settle down with her. (Sleazy, much?) Also, in true New Jersey fashion, the couple went to a diner on their first date together. So I’m guessing that Tommy caught a ton of flack for the episode, and opted out of the “Real Housewives” so as not to make a fool of his player self.

But the best part of the entire episode was hearing Dina exclaim: “Buh-bees!” Ahh, you can’t take the Jersey out of a girl. [VH1]