Almost every logo has its own interesting creation story. In addition, many logos were repeatedly changed.

The bitten apple did not serve Apple immediately, and the well-known letter “M” from McDonald’s was preceded by a logo with the SpeeDee mascot. Burger King featured the King of Burgers as its mascot on its logo, and the Sirens from the Starbucks logo at one time had bare breasts.

How the logos of these and other brands were created, and how they changed during the existence of the companies – in our material. Only a few brands are presented in this material. The website logolook.net has a large database of brands and their logos, you can familiarize yourself with the history and changes of logos 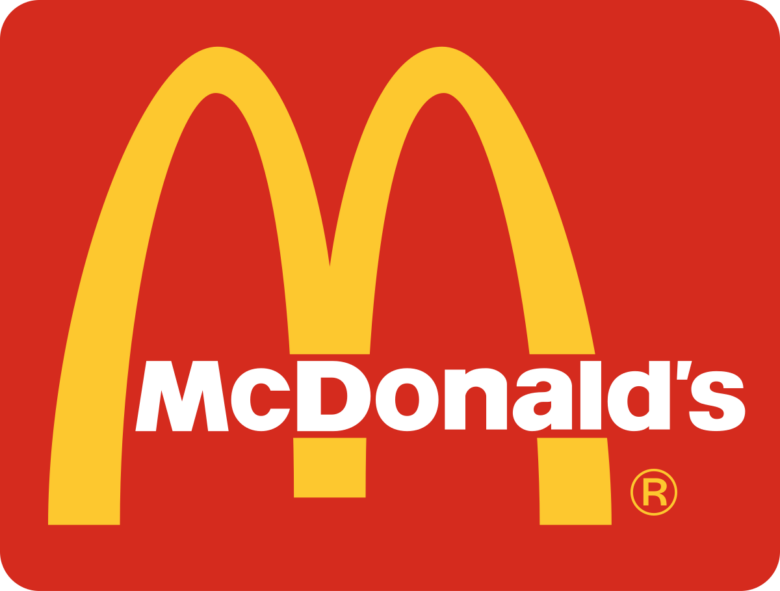 The company was founded in 1940. The first building for McDonald’s was designed by the architect Stanley Meston – golden arches in the form of the letter M were placed on it, which became the basis of the familiar logo. But the first three brand logos had a completely different look.

At first, there was a simple McDonald’s Famous Barbecue inscription on a white background. Later, the company changed the specifics of the work and shortened the name, which became the reason for developing a new emblem.

In the next logo, they decided to use a cartoon character named SpeeDee. For a while, the hero became the mascot of the brand, but later it was replaced by Ronald McDonald.

Speedy stayed on the logo for only 6 years, then it was removed and only the name of the McDonald’s company was left – in a fancy font and in red.

The world saw the arched letter “M” familiar to us as early as 1961. Since then, the logo has been adjusted more than five times, but the “M” has not disappeared. Its color, width, slope, shadows and backgrounds were changed, but the concept remained the same. By 1993, the company’s logo had become so recognizable that the name was removed from it, leaving only the letter.

The network opened in 1954 on the wave of success of fast food companies.

In the first logo design, the name of the restaurant was written in bold under a half sun. Later, the new owners of the company decided to remove the sun, leaving only the name of the network in black.

After that, Burger King, like McDonald’s, decided to use the image of a cartoon man – the King of Burgers. On the logo, he was sitting on top of a burger with a drink in his hands, and the slogan Home of The Whopper was also written under the company name. This hero was used both on the logo, and in advertising, and on restaurant signs.

In 1967, the already familiar logo appeared, which depicts halves of buns with the name of the company instead of the filling.

Later, the logo changed a little: a blue outline was added to it and the slope was changed. But a month ago, the company decided to return to the old design. For the first time in 20 years, Burger King presented a new logo. More precisely, the old logo that has been brought back into use.

The fast food chain developed its own design, which it used since 1969. The basis of the redesign was the logo, getting rid of the blue line that had been depicted since 1999. Burger King said the new minimalist logo seamlessly fits with the evolution of the brand and pays tribute to history. 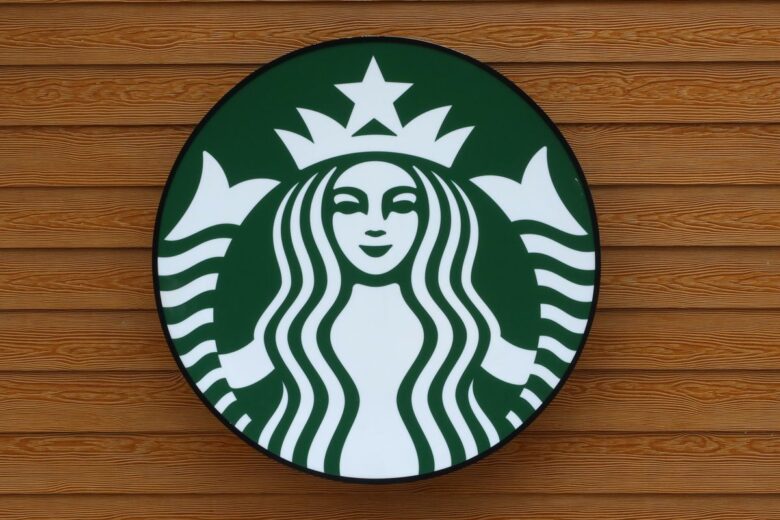 The store was named after the character of the novel “Moby Dick” Starbuck, who loved coffee very much. The marine theme was also used for the store’s logo. It was drawn by artist Terry Heckler. He portrayed the Siren, a sea creature from ancient Greek mythology.

The logo has changed several times during the company’s existence, but the original version can still be seen at the first Starbucks store in Seattle: a modified image from a medieval engraving on a brown background.

This version of the logo had a rather revealing look: Siren’s exposed breasts and spread tails could evoke certain associations among consumers.

With the arrival of the company’s new CEO, Howard Schultz, came an updated logo. The main symbol remained the same siren, but in a modern, simplified and less overt style. Stars were also added to the siren’s head and between the words on the logo, and the color changed to green.

In 1992, the image of the Siren was enlarged, emphasizing her face, and by 2011, the stroke with the company name had been removed. As you can see, this brand no longer needs to mention its name in the logo to be recognizable.

The first designer of Apple was one of the founders of the company, Ronald Wayne. He did not really believe in the success of the company, so he sold his shares almost immediately. As a logo, Wayne proposed an engraving with Newton under a tree, which was wrapped around a massive ribbon with the inscription Apple Computer Co.

The intricate drawing was not particularly liked by both consumers and the founders of the company, and soon Steve Jobs decided to change Apple’s trademark.

Designer Rob Yanov developed the second logo — the world-famous bitten apple. However, at first he was depicted as multi-colored. The apple in appearance was simple, laconic and contributed to the recognition of the brand. Therefore, Apple kept it as a logo, changing only the color. Samsung is based in South Korea. Translated from Korean, this name means “three stars”. Therefore, in the first three logos, in addition to the name Samsung, stars were depicted. And in 1993, the company decided to create a new logo that exists to this day. The name of the brand is written in white letters in the center of the blue ellipse.

Carolyn Davidson, the designer of the legendary Nike logo, was still a student when the owner of the company, Phil Knight, commissioned her to draw the emblem of his brand. At the stage of the formation of the company, Knight did not want to overpay at all, and for one-time work he was looking for freelancers in the student environment. Knight wanted a dynamic logo from Carolyn that would fit well on the shoe and stand out from the crowd. He offered only $35 for the work.

Marketing research and clear terms of reference were out of the question, and Carolyn sketched randomly. Phil Knight chose one of the options based on the “best of the worst” principle, because he was dissatisfied with the student’s work.

Thus, in 1971, the Nike logo appeared under the name “swoosh” – a tick that resembles a shoe print or even a wing. Swoosh in English is the noise of high speed.

In the initial version of the logo, the name Nike was written over the swoosh in a handwritten font. But after 7 years, the logo was refined: the curve of the tick was changed, the Nike inscription was placed above the picture, and the font was changed to printed and more restrained.

And in 1995, the company name was completely removed from the logo, leaving only the swoosh. By that time, the symbol had already become so popular that it did not need an explanation. 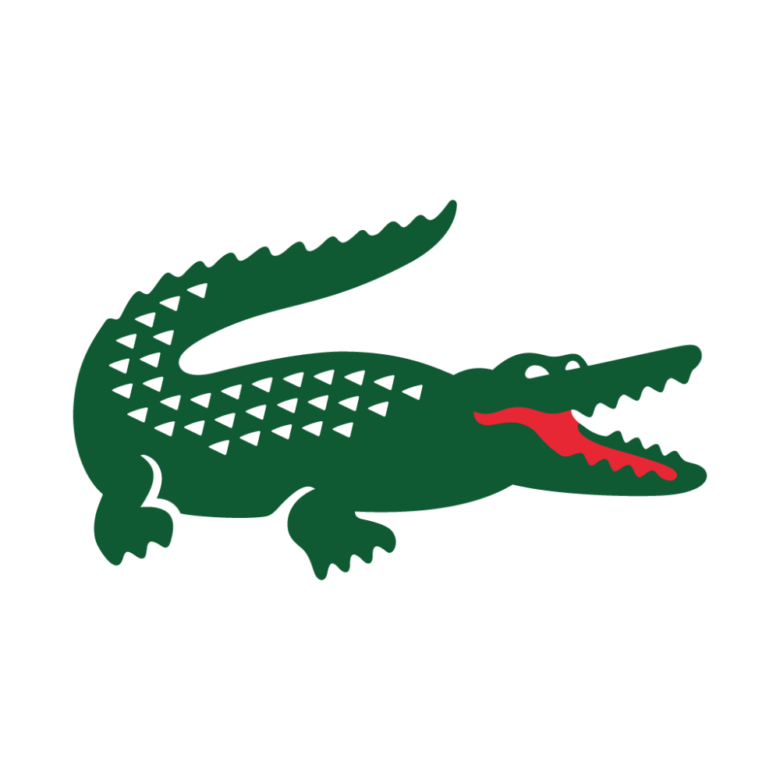 The French brand Lacoste was founded by the legendary tennis player René Lacoste in 1933.

The logo in the shape of a green crocodile appeared as a result of Lacoste’s pairing with Alan Moore, the captain of the French tennis team. On the eve of the competition, Rene argued with him that he would win the match against an Australian opponent. At stake was a suitcase made of crocodile skin, which a tennis player liked in one store.

Lacoste lost the tournament, but for his audacity, courage and tenacity on the court, he received the nickname Alligator. The famous crocodile logo was drawn by Lacoste’s friend Robert George as a caricature of his friend.

A powerful raised tail is designed to symbolize a skillful tennis player on the court. Lacoste embroidered this emblem on his jacket, and soon on other items of his wardrobe.

This is how Rene Lacoste had a personal brand even before the very concept of “brand” was born. The logo with the crocodile was changed several times, it was made more cartoonish, but the concept was preserved from the beginning.

How To Find Trustworthy Sites Online