Emblematic of France at its most romantic, the Loire Valley is an essential stop for any traveler wishing to experience some of the country’s most beautiful architecture and natural landscapes, not to mention superb wines. With its dozens of Renaissance-era chateaux dotted mostly along the breathtaking Loire and Cher Rivers– offering incredible opportunities for a luxury boat cruise and wild bird-watching tour— the region is so precious that it has been named a UNESCO World Heritage Site. This region is the ideal destination if you’re seeking history, culture, natural beauty, and luxurious surroundings.

Here’s the list of the most beautiful Loire Valley castles to visit, whether on a first or fifth trip to France. Some of these are world-famous chateaux attracting thousands of visitors per year and managed by the state.

In contrast, others are intimate, privately owned properties offering luxurious overnight stays and genuine exclusivity. They will transport you to a world of literary-level romance worthy of a novel by Balzac or Chateaubriand, who both wrote from and about the mythical region. 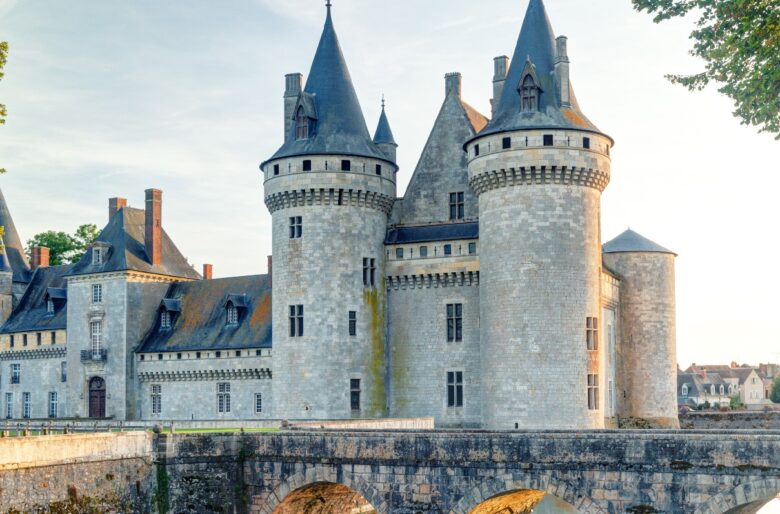 Widely considered the most stunning of the Loire Valley’s legendary chateaux, Chambord is synonymous with epic grandeur and romance. Blending medieval and Renaissance-style architecture in relatively uncommon ways, Chambord is a jaw-dropping sight: the largest of the castles to grace the region; it was built by King Francis to serve as a hunting lodge in the 16th century. Although it was never completed, its enormous fortified wall and moat (purely decorative), Romantic towers jutting into the sky, and dramatic spiral staircases are all but guaranteed to whisk you away to the past. It can be crowded, however, so it’s essential to entrust your visit to a private tour guide who can ensure you avoid the long queues and experience the Chateau in its most pleasant guise.

Another legendary castle in the Loire Valley stretched romantically over the River Cher and in close reach of the old village of Chenonceaux, the Chateau de Chenonceau has captured the imagination of those lucky enough to see it firsthand for centuries. Built-in the early 16th century, the castle was constructed on the foundations of a former mill, which explains why it spans the river, creating a uniquely beautiful effect.

Melding Gothic and early Renaissance architecture, the Chateau is much smaller than Chambord and arguably even more romantic: the subtle play of light and shadows created by the structure reflecting on the water at different times of day has long inspired writers and painters. It was also a royal favorite for many monarchs, including Catherine de Medici, widow of King Henry II and Regent of France. Later, during the Enlightenment, Louise Dupin held a literary salon at Chenonceau that attracted great thinkers and writers, including Voltaire and Rousseau. The latter composed some of his most famous works of philosophy there. Anyone interested in French literary and intellectual history should prioritize Chenonceau for that reason alone.

Learn more about these enchanting castles at https://www.traveloffthebeatenpath.com/loire-valley-france-castles. 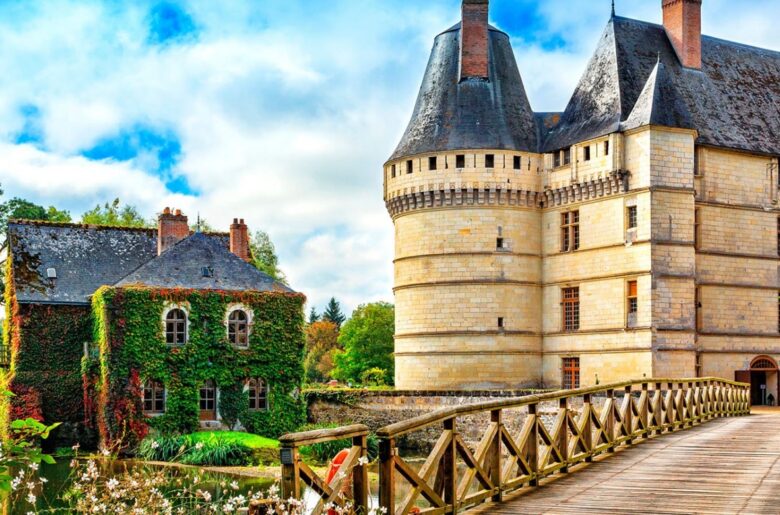 Legendary for having housed Italian inventor and artist Leonardo da Vinci in the years before his death, this lesser-known but remarkable Chateau is an absolute must for anyone fascinated by Renaissance art and history. Situated in the town of Amboise, the distinctive-looking castle boasts a Renaissance style unlike most others, whose rose-colored brick and free-masoned structure are more reminiscent of a manor than a fairy-tale chateau.

Constructed in the fifteenth century, it was acquired by the French King Charles VIII, who transformed it into a “pleasure castle” for his wife, Anne de Bretagne. King Francis I and his sister Marguerite de Navarre also resided here for a time; the latter penned one of her most beloved novels at the Chateau.

However, the legacy of Da Vinci truly captures most visitors’ imaginations today. Leonardo resided here for three years until his death in 1519. In homage to the genius of his vision, some 40 models of his machines and other inventions are on display in one of the rooms, as well as a replica of the Mona Lisa, painted by Ambroise Dubois in the late 16th century.

Perhaps the definitive fairy-tale castle in the region, if not the world; the Chateau d’Ussé inspired the one depicted in Sleeping Beauty (a tale penned initially by French author Charles Perrault). Inhabited in the past by Perrault himself, followed by the Romantic writer Chateaubriand and later by the Blacas family who still resides there today, this private Chateau certainly has more than a slight touch of magic to offer.

Featuring an open drawbridge, sumptuous 17th-century tapestries, a dungeon and underground vault that dates back over a millennium, and lavish rooms filled with Louis XIV furniture, this family home breathes luxury and prestige of a kind that’s now rare to find. The onsite wine cellar preserves some fine old vintage in its vaulted premises, but unfortunately, tastings are not on offer. Luckily, the famous wine-making towns and areas of Saumur and Chinon are close by, affording some luxury wine-tasting opportunities in the area for those interested in sampling local bottles. 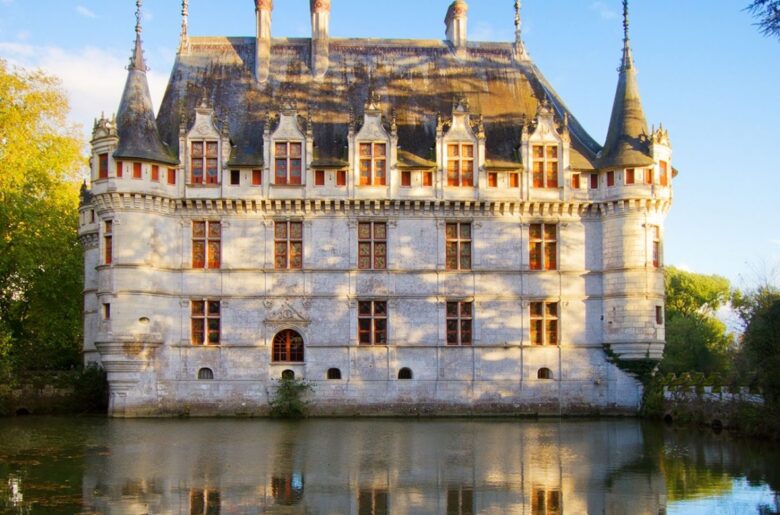 Known foremost for its breathtaking formal gardens, this is another living testament to the peak of French Renaissance landscaping techniques. Recently restored to their former glory, the parks offer a haven of peace and symmetrical harmony. First designed in 1532, the original Renaissance landscaping was recreated in the 20th century under then-owner Carvallo and is considered remarkable today for its large variety of organic vegetables.

This elegant castle overlooking the Loire and Vienne rivers and surrounding green landscapes is a privileged site for unforgettable private events and exclusive evenings, whether for a company anniversary or fairy-tale destination wedding in the Loire Valley.

Boasting a monumental double entrance with a grand staircase, eight guest rooms within the castle walls, a heated outdoor swimming pool, sauna, spa, indoor pool, and a sprawling terrace with river views, the Chateau is located in close reach of wine-making centers including Chinon and Saumur. A private event held here can be made even more extraordinary by incorporating wine tours in the area or hiring an expert French sommelier to carefully choose local wines to accompany your special evening. 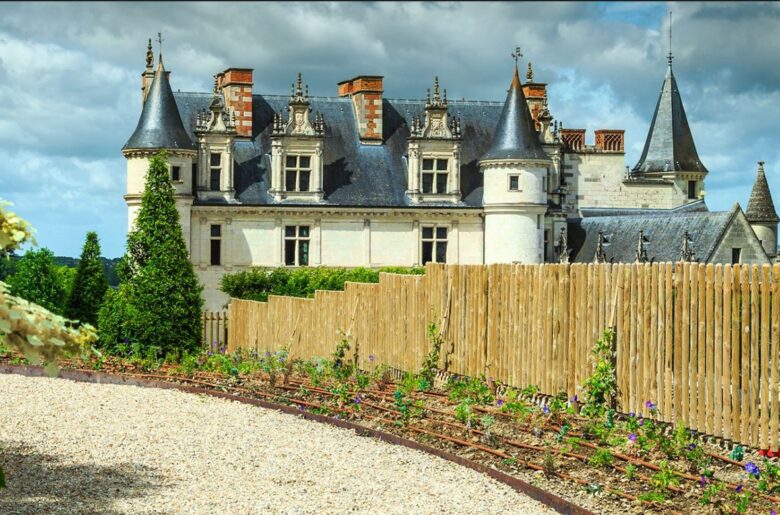 The Domaine des Hauts de Loire is as majestic as it is vast. The prestigious hunting lodge-style property includes a 4-star hotel decorated in floral and antique furniture with exposed wood-beamed ceilings and a renowned gastronomic restaurant that boasts two Michelin stars. Every day, Chef Rémy Giraud and his team, who share the same passion for the beautiful and the good, create innovative menus with cuisine inspired by regional traditions.

Take the time to let yourself be charmed by Domaine’s superb, rural setting, relaxing in the onsite park measuring some 70 hectares. Tennis courts, a heated outdoor pool, and bicycles reserved especially for guests make this an ideal spot for anyone wishing to relax and enjoy being outdoors.

Book A Bespoke Tour Of The Loire Region & Its Exceptional Sites

Are you ready to explore the possibility of embarking on your bespoke excursion around the Loire Valley? Whether interested in touring remarkable French chateaux, tasting local wines, embarking on a private champagne boat cruise, watching flocks of wild birds assemble around the riverbanks, or renting an elegant castle for your event, these castles have it all.

Foreign Words to Help You Describe Falling in...