Yesterday, I did a brief post on the racism displayed in Kim Kardashian’s much talked about Paper magazine cover and photoshoot. I focused on Kardashian’s demotion from “Whiteness” in society because of her relationships with Black men; relationships that have essentially cast her into the realm of “Blackness” where her body is readily exploited and hypersexualized, in ways eerily similar to the vulgar treatment Black female bodies receive in the United States.

Many responded by claiming that Kim Kardashian is Middle Eastern and not White. The difference between ethnicity and race should always be considered when discussing matters of racism. Per the U.S. Department of Justice:

“White people” are defined as “people having origins in any of the original peoples of Europe, the Middle East, or North Africa.”

So, Kim Kardashian (as well as her two sisters Khloe and Kourtney, are White despite their Armenian heritage. Still, race should always be understood as a social construct and not a reality. Entry points to Whiteness have constantly changed and will constantly evolve, as I discussed in a previous piece about 18 Things White People Should Know Before Discussing Racism:

“Whites” were originally Anglo-Saxon Protestants (WASPs). The definition of “White,” as a racial classification, has evolved to include “Whiter-skinned” minority groups who were historically discriminated against, barred from “Whiteness” and thus had little access to opportunity. Some examples: Italians and the Irish (who were frequently referred to as n***ers in the 1800’s), Jewish people and more recently Hispanic (George Zimmerman) and Armenian minority groups. Such evolutions, however, always exclude Blacks.

With that aside, I came across a few key articles this morning and realized the topic of Kim’s rear end on Paper magazine’s cover is in need of further exploration. To begin the discussion once more, I quote Kanye West, Kardashian’s husband:

The worth of a White woman is based on Victorian-age ideals of chastity and purity. That fact is indisputable. Kanye West acknowledges and expresses those sentiments in his verse. The easiest way a White woman can fall from grace in society is by having relations with a Black man. As discussed in my piece yesterday, the Kardashian sisters are guilty of that “crime.”

The implications of that guilt are easily perceived, especially by closely examining Kim K’s bare-assed cover and the other full-frontal photos released late last night. But before we get there, let’s explore the history of the photographer who is responsible for the image: Jean-Paul Goude.

Goude is a photographer who is lauded for his “legendary” art, most notably for photographs of Grace Jones, his then-girlfriend and “muse.” One of Goude’s most famous photographs featured a growling Grace Jones in a cage: 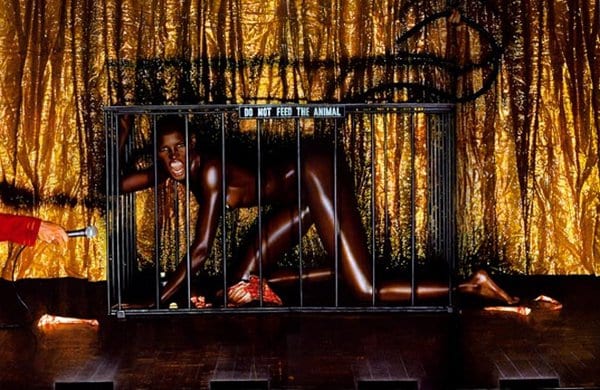 According to the famous photographer, she was a “schizo … outrageous bitch” who frequently became enraged during their arguments. A 1979 People magazine interview with Goude explained:

Jean-Paul has been fascinated with women like Grace since his youth. The son of a French engineer and an American-born dancer, he grew up in a Paris suburb. From the moment he saw West Side Story and the Alvin Ailey dance troupe, he found himself captivated by “ethnic minorities—black girls, PRs. I had jungle fever.” He now says, “Blacks are the premise of my work.”

The photo of Kim Kardashian balancing a champagne glass on her rear end in Paper is a copycat of an earlier “iconic” work by Goude, featuring a Black woman, which appeared in his book titled Jungle Fever: 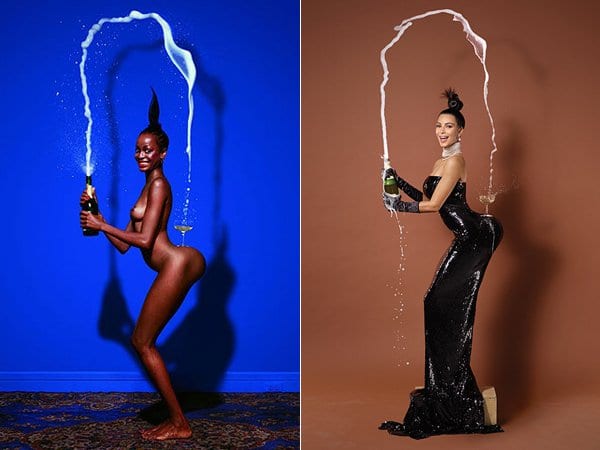 So, the photographer who exoticized, hypersexualized and objectified his Black girlfriend and other Black women for art, while openly admitting to his fetish for Black women, has now recreated his work with Kardashian posed in a similar fashion.

And it is not merely the pose that is problematic. The racist photos that I juxtaposed next to photographs of Nicki Minaj when I wrote about her album, Anaconda, resembles Kim Kardashian’s photo spread more than Minaj’s. I definitely recommend you read up on Saartjie Baartman, depicted in left image below, an African woman exhibited as a “freak show” attraction in 19th century Europe, for more historical context. 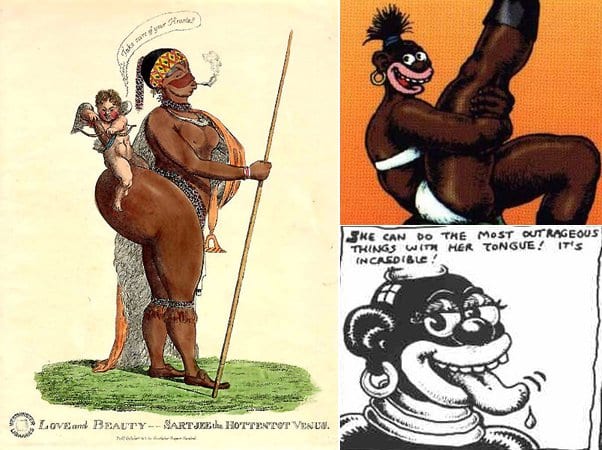 Kardashian’s hair and jewelry are both styled in a manner grotesquely similar to the stereotyped images of Black women that once freely circulated American media. Her necklace, though pearled, covers the base and length of her neck similar to African tribal beaded jewelry. Her hair stands on end in an up-do. In her full-frontal photo, Kardashian’s mouth is agape as she stares into the camera with a blank stare — a look far too commonly used to depict Black female hypersexuality.

This entire photoshoot is not merely riddled with racist undertones, it is blatantly and utterly, unmistakably perpetuating racism.

Some may argue that, that is indeed the point of art: to evoke response. Yet, for that reason precisely, I fear fighting for racial progress in America may be a lost cause because, thus far, America’s response to this “work of art” has mostly been to wonder about the “realness” of the woman’s ass, rather than the obvious racism that continues to plague this great nation. And that is just a shame.