Nesting: I’m Back, Baby! Check Out How I’ve Decorated My New Bedroom

It took three months, 612 moving boxes (or thereabouts), and the very last smidgen of my sanity, but this weekend I moved out of my parents’ house (where I’d been staying after a bad breakup) and back to New York City in a “single girl” apartment again.

However, moving into a new apartment during a rainstorm is not something I would recommend. Just a little advice from me to you.After I decided to move into a new place, I’d spent the past month accumulating the new furniture for my bedroom. I hoped to spend between $1,000 and $1,200 on everything I needed, which had to include a bed, a bed frame, sheets/comforter, a dresser, a bedside table, a book case, and a rug. (As I’ve said in other posts, I have some serious phobias about germs and did not want to furnish my new bedroom with secondhand stuff. Personal choice.) Although I’ve done the general arithmetic in my head, I haven’t actually added up how much money I’ve spent. I’m just that awesome at budgets, people. So let’s take a look back now: 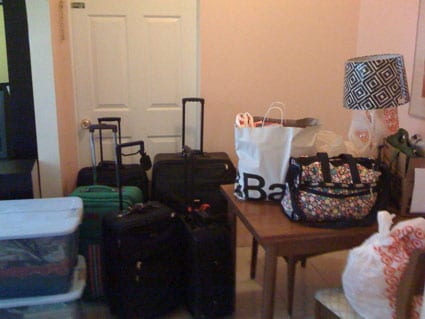 Here’s all the crap that I had to move into my new bedroom, which is roughly 8′-by-11′. Obviously I had butterflies in my stomach all day long about how I’d fit it all.

Here’s my empty bedroom with my green IKEA rug ($80). (Green was never meant to be my first choice as a rug color, but as you’ll see in a bit, I limited my options someway by purchasing this crazy, leaf-patterned duvet.) In the background you can see the box containing my metal bed frame. Here’s my dad assembling my bed frame. (Hi, Dad! Love you!) It’s a metal bed frame from IKEA that I cannot find online for some reason but I know it cost about $40. Now, originally I had my sights set on the lovely Hemnes headboard set from IKEA, which would have set me back a cool $200. But I was way bummed to learn that the IKEAs in New Haven, Connecticut, and Brooklyn, New York, which are the two closest ones to me, were both sold out of it. Instead I bought the cheapo metal bed frame for $40.

In a roundabout way, though, this all worked out for the best. See, after I wrote my last Nesting post entitled “Bed Shopping Makes Me Want To Cry,” I heard from a PR representative from Sealy mattresses. She generously offered me a new Sealy Next Generation Posturepedic for my new place. Score!

Now, this is where I acted like a dum-dum head. Instead of asking for a “full” bed (which would have been plenty big for little old me), I asked for a “queen.” A queen just sounded … queenlier. Alas, I had purchased my metal bed frame in a “full” size and I panicked last week when I realized the queen bed might not fit on the full frame. Luckily my dad is awesome and he drove back to IKEA to switch out the sizes for me. Because the queen bed is so large and my room is so small, I wouldn’t have room for the Hemnes bed frame anyway. Oh well! 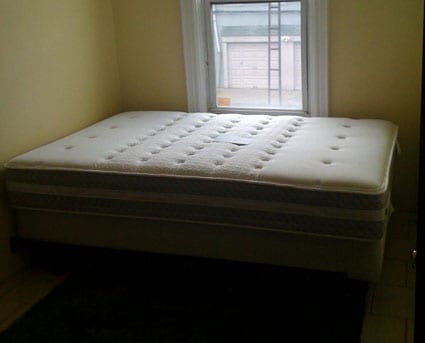 This is my Sealy Next Generation Posturepedic mattress, which I loooove. I requested it “firm” (as opposed to “ultra plush,” “plush” or “cushion firm”) because I assumed that would be better for my achy back. (The mattress at my parents’ house that I’ve been sleeping on is much softer and I frequently wake up at night in discomfort with my neck twisted in weird posistions.) I’ve only slept on my new mattress for three nights now, but each night has been a good, long, hard sleep. In retrospect, I wish I had gotten a bed that’s a liiiiiitle softer because that might feel more snuggly. However, I’ve slept like a rock and my back hasn’t hurt one bit, which is all you can ask for from a mattress. Yay! 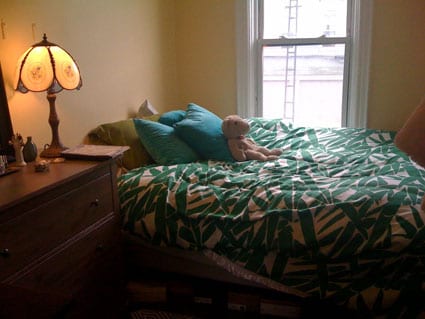 Ta-da! Here’s my bed all made up (including my teddy bear, Gregory, who is back as well). I saw the green leaf pattern of this Diane von Furstenberg’s “Green Grass” duvet at Bloomingdales on Shop It To Me and even though it was a liiiiiitle bit more money than I wanted to spend, I was in love with the pattern and the fact the fabric is sateen. As someone who literally got rug burns on her elbows when she hooked up with a dude recently in his cheap-o sheets, I knew I needed a super-soft duvet. The DVF duvet set me back $200. Two of the pillow cases were my own; the other two pillows I bought at IKEA for $10 each. My set of pretty green sheets was from Target, although I can’t find it online, and cost about $40. The $30 comforter is also from IKEA. The three plush, turquoise pillows from Pier One were $20 each but on sale 20 percent off, which totals $54. Last but not least, my king-sized Shabby Chic for Target blanket was $70. (No, there is no rhyme or reason to why I bought a king-sized blanket for a queen-sized bed that I had originally thought was going to be a full.).

My dresser has always been my favorite part of any bedroom I’ve lived in. Like every woman, it’s where I keep my perfume, makeup, photographs of loved ones, and all the other little things that make me feel like a girl. My father and I sparred about what size dresser I should buy myself from IKEA (I wanted to go big, he insisted smaller would be better) and I caved into him and bought the Hemnes three-drawer chest for $150. The mirror I bought from Target for $45. That stained glass lamp on my dresser is one of the few items that I already owned. 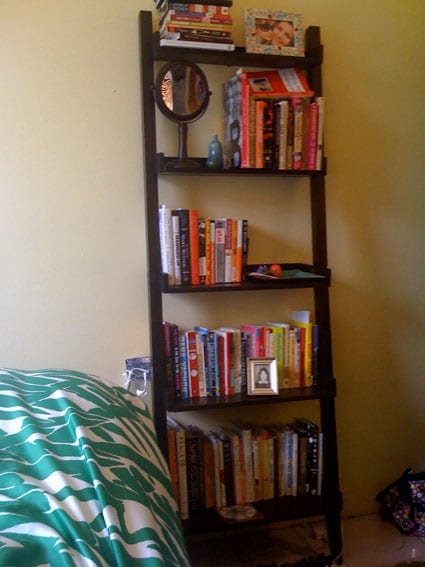 How much do I love this bookcase? I’ve wanted Target’s “Manhattan” ladder bookcase for ages and now I finally have it. This bookcase set me back $120.

This small chest of drawers from Home Goods is my second-favorite piece of furniture in my new bedroom. Frisky commenter/high school friend Corrie and I nabbed it at a Home Goods store in Connecticut for only $100. I just love all the mirrors on it! It’s the perfect place for me to keep all my bras, panties, and other bedtime accoutrement. The clear lamp and the black-and-white patterned lampshade are both from Target, although I can’t find them online. They probably cost about $50 together. You can’t really see from the photo but in my closet, I have six of those multiple-layer hangers, which saved me considerable space. Those are also from Home Goods and I’m guessing were about $30 total. 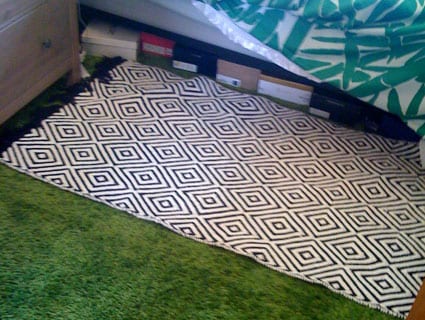 Last, but not least, here’s my little black-and-white Pier One rug. Why do I have two rugs, you ask? I have no clue. I bought the black-and-white rug from Pier One because it was A) $40 but on sale for 20 percent off and B) matched my black-and-white Target lampshade. But once I realized that the floor in my new bedroom was linoleum and I would want the whole thing covered, I had to go buy that large green rug from IKEA. I didn’t want to return the smaller rug ($32), though, because it’s cute! Now I just threw the small rug over the big rug. It might look silly, but whatever, it covers up my laptop cords.

Whew! That’s a lot of stuff. But you know what? I love my new bedroom. No, I love my new bedroom. No, I LOOOOOOVE my new bedroom. It’s so warm and inviting and comfy. And, with the exception of the mattress given to me for free by Sealy, I paid for every damn thing in that room by myself. Usually the money I spend on clothes and shoes leaves me feeling guilty, but not this home decorating project: no, there have been times this weekend that I’ve been sitting in my new digs, looking around and thinking, “I furnished this whole room myself.” Damn, that feels good.

Did I stay under budget?

The grand total is $1,118. Wow, I just barely made it! Obviously if I had not gotten the mattress for free I would have had to get a cheaper duvet/bookcase/mirror/blanket, or some other combination of pricey items that would have given me a few hundred bucks of breathing room. I am extremely, extremely grateful for how fortunate I’ve been furnishing this apartment and the help I’ve had from my dad (assembling), my mom and Corrie (shopping), and Sealy. While getting dumped by my ex-boyfriend totally blew — it blew chunks, really — I’d like to think I’ve been able to make lemonade out of lemons as I build my new home: single, happy and stronger than ever. Thanks, everyone, for all your advice and support!

6 Benefits of Selling Your Home to a...