I resent only being given the choice to put olive oil, and not butter, on my bread at restaurants. It’s not because I’m inherently opposed to olive oil because of my deep and abiding love for butter; it’s because restaurants don’t take care of their olive oil and it goes rancid.

Olive oil (and all cooking oil) goes rancid because of oxidation, or exposure to heat, air, and light. Does that sound like a restaurant to you? Because it does to me — olive oil is usually kept in clear (rather than dark) glass bottles, with an open spout, at room temperature, on tables. When oil oxidizes, it loses vitamins, but it also develops compounds that can be toxic, according to lipid specialists.

According to Olive Oil Times (god, I love niche magazines), the two main defects in olive oil are rancidity and fustiness. When olive oil is rancid, it tastes like crayons — and that’s what olive oil at restaurants usually tastes like. It’s hard for consumers to know the difference, though, because most of the straight olive oil we taste is already rancid, so we think that’s how it’s supposed to taste.

Fustiness happens when olives are stored for too long before the oil is produced and is caused by fermentation while they sit. Fustiness is harder to pin down than the stale, slightly bitter taste of rancidity. Olive Oil Times describes it thusly: “Look through a batch of Kalamata-style olives and see if you can find any that are not purple or maroon-black and firm, but instead are brown and mushy. Eat one. THAT is the flavor of fusty.” It’s harder to pin down than rancidity mainly because the majority of the olive oil we have in our homes came to us fusty.

There’s also the fact that most oils that are labeled as “extra virgin” aren’t actually “extra virgin” by the sensory standards of the International Olive Council (yep, that’s a thing) or the USDA, and no, there are no FDA labeling standards for olive oil virginity that could be used to enforce truthfulness. The virginity of olive oil has only to do with those sensory standards – extra virgin olive oil can’t be rancid, fusty, or musty. A study from UC Davis showed that 69 percent of imported olive oils and 10 percent of California olive oils failed sensory tests. Oddly enough, only the Kirkland brand of organic olive oil – the brand sold at CostCo and Safeway — passed acidity tests. 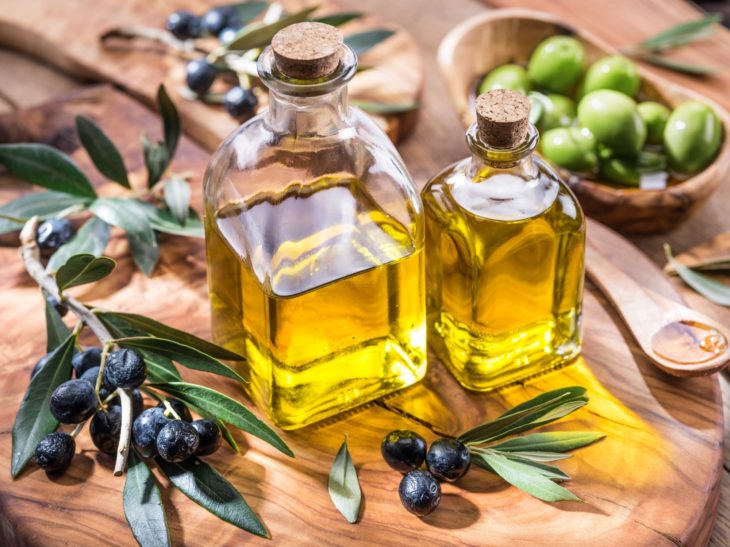 Fresh olive oil has a little bit of a peppery taste resulting from polyphenols that act as antioxidants. Those polyphenols are one of olive oil’s greatest virtues, but they don’t survive rancidization. They also cook out when olive oil is exposed to heat, which is one of the reasons that Rachael Ray is out of her damn mind for using “EVOO” in all of her recipes. (Can we just talk for a second about the uselessness of a four-syllable acronym that you have to explain every time you use it? Saying “extra virgin olive oil” takes all of three more syllables. C’MAN.)

On top of that, olive oil’s smoke point is relatively low in comparison to other oils. When you use it for cooking, it starts degrading well before oils like canola, almond, peanut, and avocado oils would. Peanut and canola oils are at least as cheap as olive oil, if not cheaper, so there’s really no reason not to keep it around if you’re going to be using oil for cooking.

To maximize the deliciousness and nutritional benefit of your olive oil, these are the best practices:

And at restaurants — maybe just ask for butter.

How To Host A Perfect Dinner Party, According To Ina Garten

It Was Over When …

Should You Take CBD Oil Before or After...