Jay Jay McGuire–a Philadelphia area “comedian” who posts on Facebook and YouTube under the moniker “The Philly Offensive“–has gone viral with a post claiming to have posted a sign shaming EBT card users at WaWa stores in his area. The sign says “We are no longer accepting EBT. Please use cash or credit. If you do not have cash or credit then maybe it’s time to get a job.” 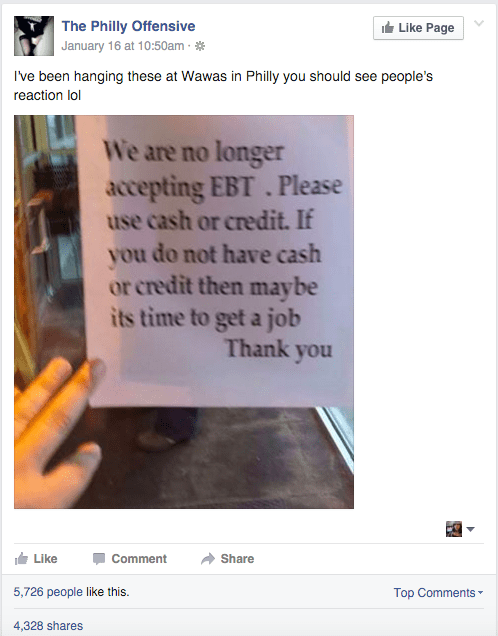 This isn’t the first time McGuire has gone viral by shaming people without enough money for food. This past December, he made the news by posting a video in which he yelled at actors portraying poor people buying food with EBT cards and lottery tickets with cash. At the end of the video, he stole a steak out of one of the actors’ bags, proclaiming that “Steak is for fucking taxpayers.”

McGuire is notably of the variety of “comedians” who thinks all he has to do to be funny is offend people. Which–let’s be real–is a relatively easy thing to do and does not require wit or any comedic timing. It’s actually quite sad when you think about it.

As of this time, the post of McGuire’s sign has been shared over 4,000 times and “liked” over 5,000 times. Clearly, this is a message that resonates with a lot of people. A lot of people who are either incredibly misinformed or incredibly callous. So let’s discuss!

First of all! According to the USDA, 20 percent of people receiving SNAP benefits are elderly or disabled. 75 percent of SNAP recipient households include a child, an elderly person or a disabled person. Are you ok with children, the elderly and the disabled getting a little extra money for food? I sure am!

The problem, you see, is that these people are working jobs where they are not making enough money to live off of.

In 2013, McDonald’s offered its employees a “suggested budget” for managing their meager incomes. According to that budget, an employee making minimum wage would have to work 74 hours a week, and would still not have enough money for food, gas, heat or health insurance. 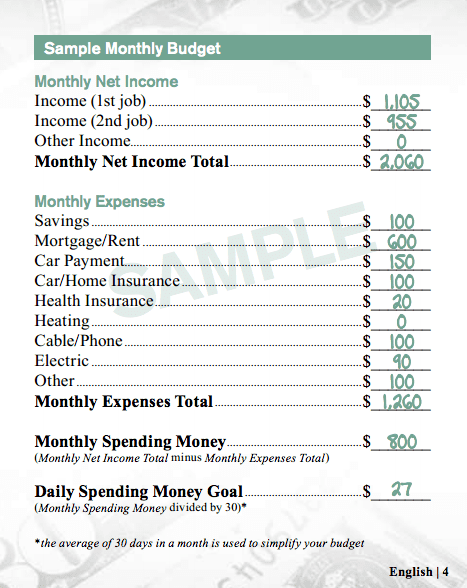 In order for companies like McDonald’s to have the “freedom” to pay their employees less than they need to live on, taxpayers subsidize their paychecks with programs like SNAP and TANF. It would be nice if they could pay their employees enough to live on, but if that were the case, it would be awfully tough for CEOs of those companies to make upwards of 300 times what their average worker makes.

Now, one of the things pointed out by McGuire and his acolytes is the belief that programs like SNAP are rife with fraud. However, that is not factually true. I get that it “feels” true, but it’s not. In actuality, these programs are rigorously managed, and there is only about a 3% rate of fraud. Most of that fraud, however, is on the part of retailers rather than recipients.

To boot, you have to be extremely poor to receive SNAP benefits. When I was on unemployment several years ago, I looked into getting them, and I was technically still “making too much” to qualify.

I get that it’s easier, psychologically, to assume that people receiving government benefits are lazy jerks who want to take your tax money to buy steaks and lottery tickets. I get that. It’s really, really upsetting to think about the horrors of poverty in this country. It’s upsetting to think about someone working 74 hours a week and still not having enough money to eat. It’s easier to be angry at them than to be angry at a system, or to feel like the American Dream is a lie.

“The Saddest Dog In The World” Is Smiling Again!

True Story: My Husband Is Bisexual