Rapper B.o.B. Insists The Earth Is Flat, Illuminati Helpless To Stop Him

A few weeks ago, Tila Tequila freaked the hell out on Twitter, going on a giant rant about how the earth was really flat. This may have been related to some kind of mental illness she was suffering that I was not aware of upon writing a post about that freak out, and I’d like to apologize for that. Although–strange as it may sound, a lot of conspiracy theorists are actually quite sane, albeit deeply misinformed.

However, it looks like her “theory” is catching on. Atlanta-based rapper B.o.B. has spent the last day and a half or so trying to convince his Twitter followers that the earth is flat. As far as I know, as of this writing, he is relatively sane. Ish.

y’all be like… “you’re not high enough to see the curve…keep going” pic.twitter.com/dzgYpIIao3

His belief in a flat earth seems to be based upon some extremely poorly written things he’s read, and the fact that he can’t see the earth curving.

Also, this is apparently supposed to mean something? Some kind of NASA conspiracy theory?

And somehow it relates to the freemasons, because of course it does.

Oh man, look at all those guys with their compasses! Surely there was some kind of official illuminati meeting in which they all decided “OK, so when you do a portrait, make sure you pose with a compass, all right? That way, many years in the future, people will be able to figure out how you all colluded over many different centuries to convince the world that the earth was round instead of flat! For reasons! What reasons? Well, you’ll have to ask the illuminati of the illuminati about that. We’re just middle managers here.

It also somehow is related to the moon landing being faked?

Like many other conspiracy theorists, B.o.B. insinuated that those who disagreed with him were sheeple. 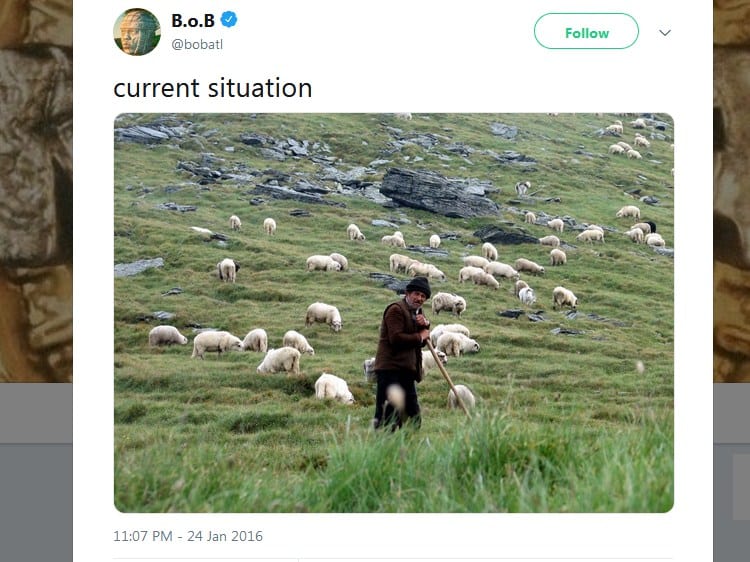 And, naturally, encouraged them to “do their own research.”

“Research,” in the way conspiracy theorists mean it, does not mean reading scientific journals or papers, but rather watching YouTube videos like the ones B.o.B. references in his tweets.

Or like this one about Michael Jackson’s secret message to the illuminati, which is my favorite thing that ever happened in life.

You should not, of course, consult actual scientists like Neil deGrasse Tyson about this, because he is probably in it with the illuminati.

@bobatl Earth’s curve indeed blocks 150 (not 170) ft of Manhattan. But most buildings in midtown are waaay taller than that.

@bobatl Polaris is gone by 1.5 deg S. Latitude. You’ve never been south of Earth’s Equator, or if so, you’ve never looked up.

@bobatl Flat Earth is a problem only when people in charge think that way. No law stops you from regressively basking in it.

This is true. People can believe in a flat earth all they like. They can also believe in chem trails, or that the Holocaust never happened, or that all of our world leaders are shapeshifting lizard people. They can even express concern about what the queers are doing to our soil. There are piles and piles of people on YouTube spouting insane theories on pretty much anything you can possibly think of.

Here’s a guy who thinks a commercial for Miracle Whip is part of some wacky Satanic plot or something!

No one is silencing these people! They are right out there, in public, on the internet, and everywhere you go. Alex Jones has his own internet radio show or whatever. If there were some centuries-long conspiracy theory to make people think that the earth was round (for no apparent reason), the Illuminati would probably be on it’s way to take out B.o.B. and Tila Tequila and Sherri Shepherd and a hell of a lot of YouTubers, in order to keep their deep dark secret. But I’m pretty sure all those people are going to be OK. I mean, if the Illuminati was as powerful as these people seem to think it is, surely they’d have the power to control YouTube and Twitter.

Conspiracies That Gloom Over Britain! Who is Prince...

The Weird Explanation Why Some People Think Prince...

15 Things You Didn’t Know About The Illuminati