Relationship Do Or Don’t: A TV In The Bedroom

When Nick and I moved, we sold our TV, and for the past couple months we’ve been toying with the idea of living a TV-free life. It was nice for awhile, but soon we realized we had turned into that special breed of hipster who says “I don’t watch TV,” but spends, like, six hours a day watching Netflix TV shows on their laptop. We love TV. So sue us. Last week, we decided to stop squinting at our laptops and bought a new TV. Since we didn’t have a table to put it on in the living room, we were like, “Hey, let’s put it in the bedroom for now! We can snuggle and have movie nights!”

And yeah, that didn’t really work out. In cities where you are short on space like London, this is a very tempting idea. You can mount your TV on the bedroom wall and have a TV aerial or satellite installed by companies like AerialForce, and that can be the end of it! Accessible entertainment right by your bed. Another major benefit is that you have a more spacious living room. You can repurpose this space to be more a mini office or home gym while living in close quarters. With the bedroom doubling as your entertainment space, it seems like a win-win situation! But it wasn’t that simple. Maybe there was a reason why most TVs are installed in the living room. I had a little voice in the back of my head saying, “Bad idea!” as Nick set up the TV on top of our dresser, but I wrote it off to yet another thing that women’s magazines had traumatized me about.

I’ve read about a million articles about how having a TV in the bedroom will instantly ruin your relationship, decimate your sex life, and cause severe insomnia. The first night, we snuggled, watched an episode of “Psych,” and fell asleep. The next morning, our relationship was still intact, but I was already pretty sure I wanted to move the TV out of our room. A couple days later, we did. Mostly I just didn’t like how it changed the energy in our bedroom. The TV, even when it wasn’t on, was a dominant presence in the room. It was tempting to turn it on and flip through Netflix whether or not we were in the mood to watch something. And it altered the calm atmosphere in a way that music, a stack of books, or even a laptop on the edge of the bed never did.

When we moved it out into the living room, I couldn’t help but feel a wave of relief. I’m glad we tried it out, but it wasn’t for us (although thankfully, the results were much less disastrous than women’s magazines make them out to be). 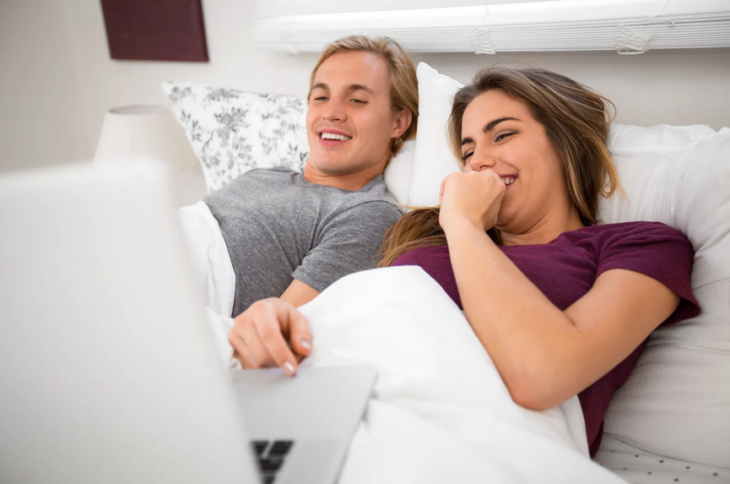 I’m curious to hear about other people’s TV in the bedroom experiences. Do you have a TV in the bedroom? How often do you watch it? I feel like if we really wanted to make it work, we could have, probably by establishing some TV-free times or finding a way to cover up the screen when we weren’t using it.