Though the .308 Winchester cartridge obtained more competition during the last decades, especially with the rapid ascent of the 6.5 Creedmoor, which ignited lots of debates around the two cartridges, it remains one of the most popular rounds in the US. The main reason for that is dead-on accuracy at medium ranges at a sound price. Despite the overall ammo shortage related to the explosion of gun sales during the pandemic, the .308 Win ammo is widely available and makes the top 5 cheapest cartridges, giving place to .22 LR, 9mm, .223 Rem, and 5.56 NATO.

Though .308 Win is not the best cartridge for long-range competitive shooting, you can achieve great results within 300 yards. However, nowadays, it is mostly used for hunting. Compared to the mentioned 6.5 Creedmoor designed for unparalleled accuracy, .308 Winchester delivers more energy to the target and has more frontal surface area, which translates to more room for error in shot placement when hunting deer in the mountains.

Another reason why .308 Win is more popular than other 30-caliber cartridges like the legendary 30-06 Springfield or .300 Win Mag is that it’s short-action, and, thus, lighter and less recoiling. That’s why the market offers so many great .308 rifles.

As you can see, the .308 Winchester cartridge is a very versatile cartridge used for hunting medium and large game, mid-range competitive shooting, and some low-cost range plinking. Now let’s move on to the main part where Gritr Sports suggests its top 5 best 308 semi-automatic and bolt-action rifles. 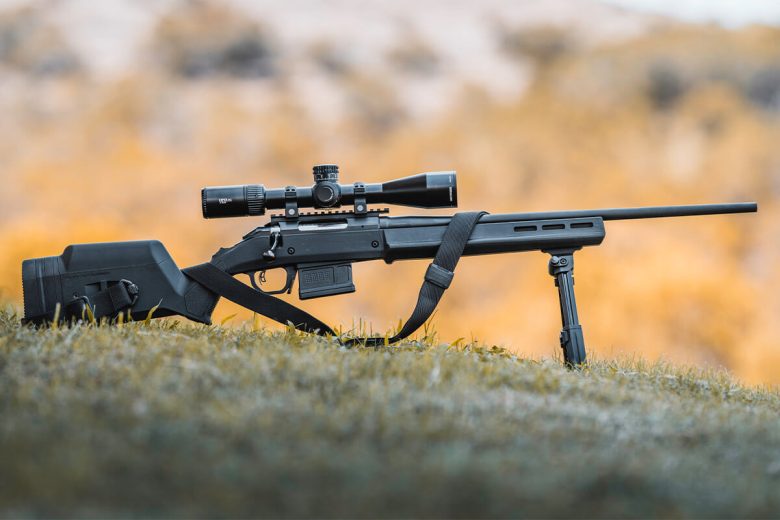 Let’s start with the cheapest offering on our list. The American Hunter is a bolt-action rifle, the result of the joint effort of two trusted brands that have built their reputation making best-in-class products – Ruger and Magpul.

As a manufacturer of firearm accessories, Magpul has contributed by the creation of the feature-rich Hunter American short-action stock intended to meet the needs of savvy shooters at an affordable price. The ergonomic stock, featuring an adjustable length of pull and cheek weld, is made of reinforced polymer for higher strength and less weight, but that’s not particularly outstanding. What really makes the Magpul Hunter American stock stand out is the anodized aluminum bedding block.

If you’re new to firearms, you may be unaware of such a thing as bedding. The bedding is a bearing surface between the rifle components that provides a foundation for smoother operation of components and removes flexing of the action in the stock, which results in improved accuracy and longer service life.

So, the Ruger American Hunter featuring a free-float 20-inch barrel with the bedding will maintain accuracy for longer. That’s cool.

The proprietary Marksman Adjustable trigger technology allows you to choose the pull weight for your needs. 3-5 pounds isn’t a light trigger. However, you may not want it to be light in high-adrenaline situations.

Unlike a traditional bolt-action rifle with an internal magazine, the Ruger American Hunter features a detachable 5-round Magpul magazine that makes reloading easier and faster. Picatinny rail is attached to the portion right above the rifle’s action, and the forend features eight M-LOK slots.

The rifle weighs 9.2 pounds, and that’s on the heavy side, but this mass absorbs more recoil force. The Ruger Precision Rifle Hybrid muzzle brake minimizes recoil even more.

So, the Ruger American Hunter is a great do-it-all, affordable bolt-action rifle in 308 Win. It’s accurate and, thanks to the bedding block, will maintain this accuracy for a long time.

The Model 110 is another product of collaboration on our list. The Magpul Hunter 110 stock is very similar to the mentioned Hunter American for Ruger. It also features the bedding block with a shell made of reinforced polymer and the interior machined from A380 cast aluminum coated with the Type III hard, anodized finish. Other features like magazine well, adjustable length of pull, and M-LOK slots on the forend are the same as in the mentioned Ruger, except the cheek weld that is not adjustable.

What’s particularly interesting in the Savage 110 Magpul Hunter is its carbon-steel barrel. It’s heavy and only 18 inches long. The barrel length does influence the bullet velocity, and Savage knows that. That’s why the barrel features the muzzle threaded for the suppressor. Thus, we get a suppressed barrel that is longer. Also, many shooters believe short barrels are stiffer and, consequently, more accurate. And the Savage 110 is indeed one of the most accurate bolt-action rifles.

The model also features the AccuTrigger adjustable within 1.5-4 pounds and an oversized, knurled bolt handle that is faster to operate, especially with gloves on.

The Savage 110 Magpul Hunter weighs 8.9 lbs, but it’s still a very maneuverable rifle due to the reduced barrel length. 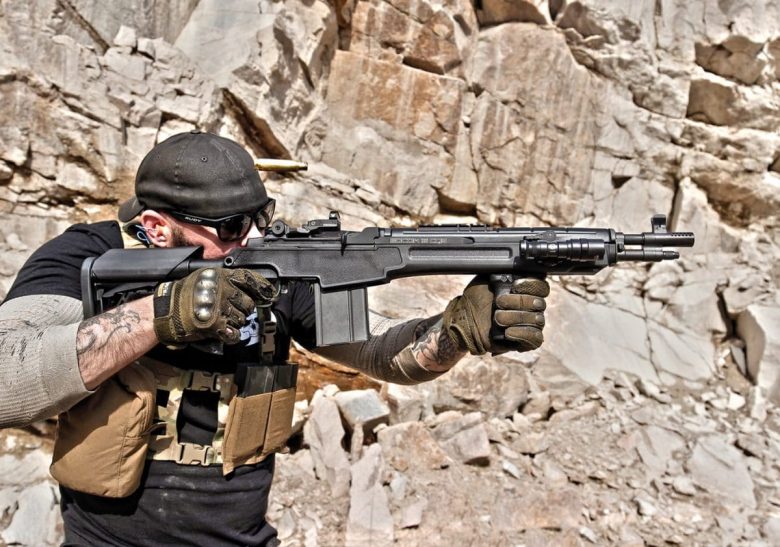 The M1A SOCOM 16 CQB is one of the best semi-auto 308 rifles on the market. The rifle is a civilian variant of the M14 chambered for 7.62x51mm NATO, the military variant of .308 Winchester.

The M14 was introduced in the 1950s as a standard-issue battle rifle and saw application in Vietnam. Though it demonstrated good penetration capability, punching through thick vegetation and enemy armor, the rifle’s dimensions and weight of the 7.62 ammo plus full-auto incompatibility of the whole system made it impractical. This is how they created a more maneuverable M16 (AR-15) and a lighter 5.56 NATO cartridge.

However, the M14 platform didn’t fall into oblivion and has many supporters in the US and beyond. That’s why Springfield Armory introduced the line of its M14 variants.

The classic M14 rifle has a 22-inch barrel, which is not very practical for close-quarter environments. Springfield Armory managed to do the unthinkable and put the power of the .308 Win cartridge in a smaller package with a barrel length of mere 16.25 inches. The result is a highly maneuverable and amazingly powerful 308 rifle ideal for cramped environments.

Unlike the other two conventional M1A SOCOM 16 rifles in a more traditional design that many consider dated, the M1A SOCOM 16 CQB is a truly modern rifle. It features the Archangel CQB stock with multiple sling sockets, collapsible buttstock, cheek riser, and AK-style ergonomic pistol grip that contributes to the more effective recoil control.

Long story short, the M1A SOCOM 16 CQB is not for no reason considered the best 308 semi-auto rifle. It is heavy (9.3 pounds), but its reduced length and modern-style stock make it a great weapon for self-defense and range shooting.

What distinguishes this rifle from the other bolt-action rifles with or without the bedding block is the chassis. Chassis is a more feature-rich alternative to conventional stocks for several reasons, the first being precision.

Christensen Arms chassis is machined from 7075 Billet Aluminum to an exact spec. Wooden stocks never reach the precision level of aluminum chassis simply because wood is a softer material. The CA chassis features V-block bedding that provides a flush surface for components and prevents flexing. The free-floating handguard doesn’t interfere with barrel harmonics.

The second reason is more customization options. The Christensen Arms chassis, for instance, has everything the savviest shooter needs. The buttstock is foldable to make the rifle fit into a hunting backpack, for example, and make it generally more transportable. When folded, the stock is secured by a locking hinge and a magnet. The adjustable cheek riser allows for easier alignment behind the scope. Unlike rifles from Ruger and Savage that need spacers, the CA MPR doesn’t require the rear side of the stock to be fully dismantled. All you need is to loosen the screws, pull the stock back panel, and then tighten the screws back. The grip is AR-style.

Hunters will appreciate a large trigger guard that doesn’t interfere with manipulating the trigger in thick hunting or tactical gloves. The 3-pound trigger itself is flat, ensuring consistent placement and pull.

The Christensen Arms MPR is a pretty lightweight rifle because it’s almost all carbon fiber. The barrel is made of stainless steel and is available in 16, 20, or 24-inch lengths for the 308 Win caliber. Christensen Arms guarantees sub-MOA accuracy, and the rifle does produce nice tight groupings. 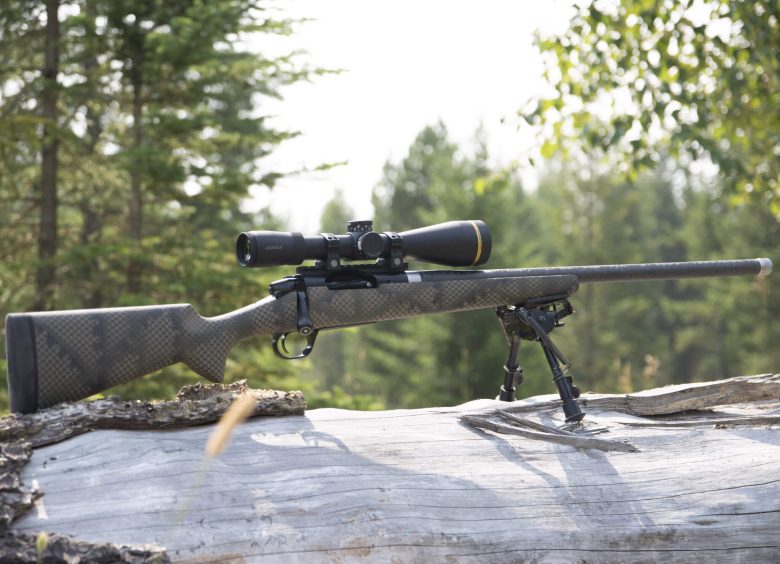 This higher-end conventional bolt-action rifle is amazing. First of all, it’s feather-light, weighing mere 5 pounds. The 20-inch barrel is carbon fiber-wrapped, and the Proof stock is also made of carbon fiber for exceptional lightness and strength. This rifle is built for adventurous hunters hiking mountains in search of this big buck. It won’t make your shoulder suffer from dull pain caused by many heavier rifles. So once you spot the right deer, you’ll be all prepared for your best shot.

Proof Research declares the sub-MOA accuracy, so be sure the Elevation Lightweight Hunter will deliver the shot right where you want it to be.

The cycling of the rifle is smooth thanks to the Origin Action manufactured by Zermatt Arms. The curved trigger from TriggerTech breaks nice and crisp. The muzzle is threaded for the suppressed fire.

The Elevation Lightweight Hunter is not an affordable rifle, but if you have money to spare and want a light, accurate, conventional 308 bolt-action rifle, why not choose this one?

All the mentioned rifles are great, from the cheapest to the most expensive ones. All you need is to choose the model best for your needs. If you want an affordable 308 Win with stock adjustment features, go with Ruger or Savage. Want a maneuverable, easy-to-control rifle? You’ll hardly find something better than the M1A SOCOM 16 CQB from Springfield Armory. Those whose price point is high can consider the Christensen Arms MPR with plenty of adjustment options or the Proof Research Elevation Lightweight Hunter in a lightweight package. Choose your guns wisely, and have a nice day.

Why Lego Appeals To Builders Of All Ages

The Advantages of Opening Rooflight

Is CBD or THC Better for Chronic Pain...