“It is the Microbes who will have the last laugh”. Louis Pasteur had this vision way back in the 1850s, 80 years before the Spanish flu epidemic and these words have stood true in each and every pandemic since then, including the current pandemic. It is currently an undeniable fact that it is the Microbes that are having the last laugh as they are the ones who are a major Cause and Cure in this pandemic too. The word ‘microbe’ itself is very paradoxical in nature since Antonie van Leeuwenhoek first discovered them in the 1670s.

While Louis Pasteur blamed them for food spoilage with the introduction of ‘pasteurisation’, to the 1870s when Robert Koch busted them for causing diseases such as tuberculosis, Cholera, Anthrax etc. While various discoveries have occurred around the world, our own country ‘India’ should not be forgotten, where discussion about microbe’s dates back to the 6th century BC, where they are mentioned in Jain scriptures by Lord Mahavira himself calling them ‘Nigodas’, to our current situation where Indians rely heavily on microbes for food too, from our yogurts to cottage cheese to pickles and whatnot. 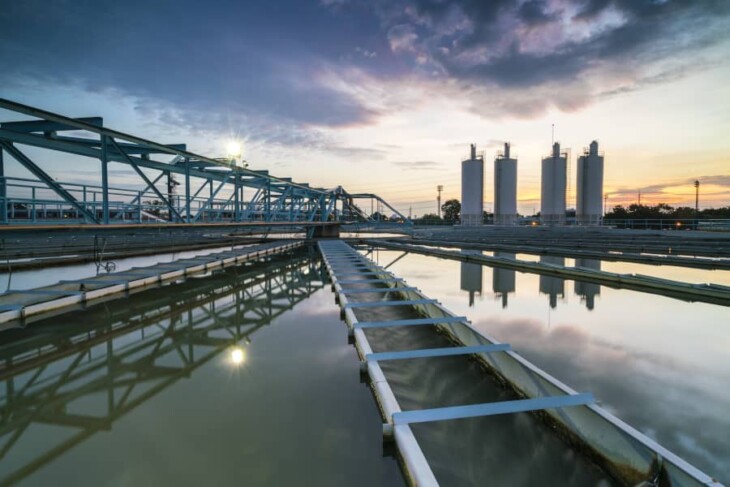 These creatures are also classified ecologically on basis of their environment of existence viz.

Extremophiles: These microbes tend to survive in extreme conditions and can be sub-classified as:

1.Hyperthermophiles or Thermophiles: They survive at a very high temperature up to 130oC.
2.Psychrophiles: They survive at very low temperatures as low as -17oC.
3.Halophiles: Survive in saline conditions up to saturation and require sodium chloride for growth.
4. Acidophiles and Alkalophiles: Survive in highly acidic and high alkaline pH up to 10 respectively.

Apart from these, there are microbes that can survive in high-pressure conditions (barophiles) as well in radiations too.

Micro-Organisms that Clean our water systems: 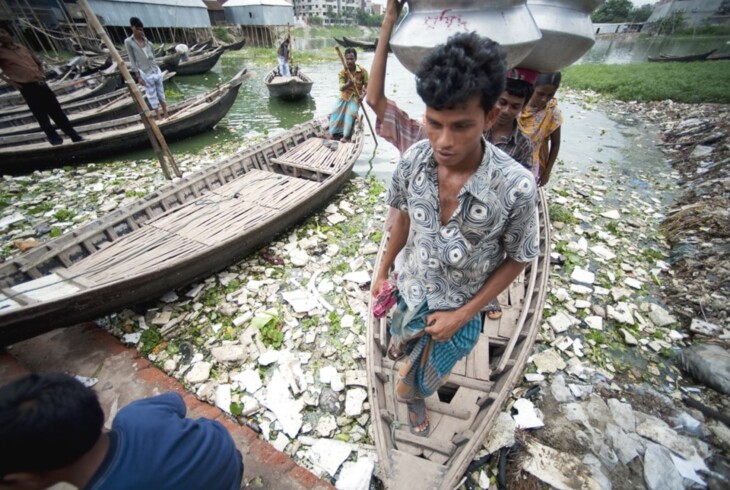 The movement of these single-celled microorganisms are aided with the use of hair-like projections called cilia which cover the body of the microorganism. The cilia help in movement as well as capturing food and storing it in food vacuoles. Reproduction of ciliates occurs through the division of cells along with DNA sharing with the divided cell.

Movement of these ciliates occurs using cilia found on the lower surface of the body. Fusion of the cilia also occurs to form thicker cilia which is also known as “cirri”. In comparison to other ciliates, swimming movement is weak in crawling ciliates. 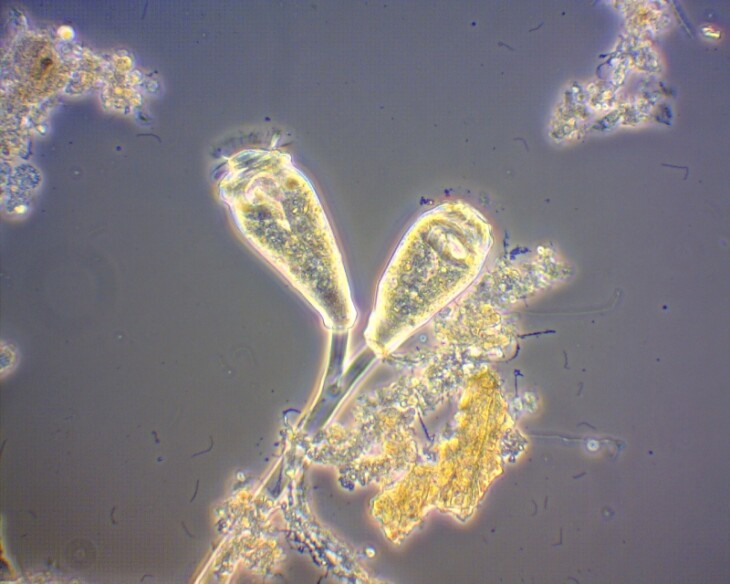 These single-celled organisms can rapidly coil up into a spring to avoid danger using a filament or stalk and capture food using cilia present at the top pf the cell.

Reproduction occurs through the division of cells into two daughter cells, with one cell retaining the stalk and the other becoming a free-swimming cell. Once a place to attach is found, the free-swimming cell attaches itself and grows a stalk. During reproduction, these cells can also share DNA with another cell before division as seen with swimming ciliates.

These organisms capture food by encapsulating the food by extending a false foot which is known as a pseudopod.
Amoebas that build a shell through the collection of particles or by releasing chemicals are called shelled amoebas. These organisms use the space in their shell to extend their pseudopods to reach into the water and encapsulate the food. Their diet mostly consists of bacteria, algae and other single-celled organisms.

The movement of these single-celled organisms is assisted using threadlike projections called flagella, which is present at the front of the cell. 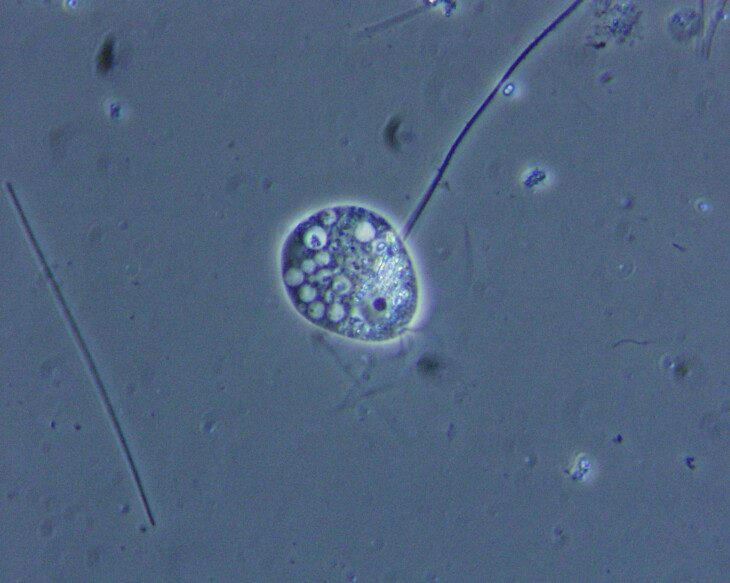 Rotifers are the most commonly found colorless, microscopic animals in wastewater, and they feed on bacteria, algae or microbes.

The body is divided into three parts, the head (with cilia), a trunk and a tail or foot. Rotifers reproduce through sexual reproduction and laying eggs.

These organisms are microscopic in nature but can be as large as 1 mm to about one-thirtieth of an inch and might be visible without a microscope. The movement of Water Bears is restricted to crawling as they do not swim.
They can withstand extreme conditions by reducing body moisture to 3% from 85% and can survive in this state for years.

These organisms are the largest animals in wastewater and are bright orange or characterized with pink spots. The body is long and segmented and can be as large as one-quarter of an inch. Reproduction occurs through budding at a particular segment. 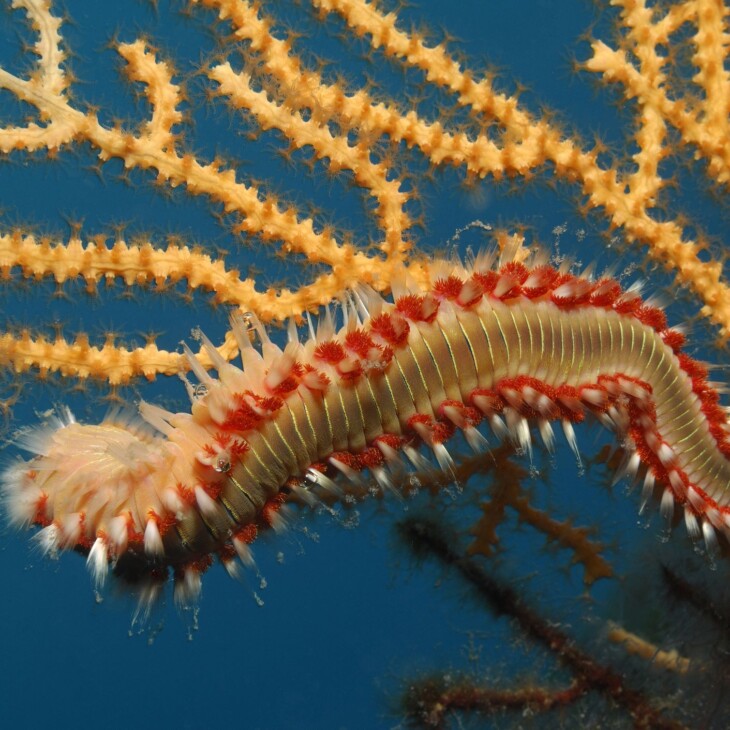 How microbes are spades of Industrial wastewater treatment:

The use of these microbes accelerates the process of treating pollution on a small surface in Industrial wastewater treatment plants. It’s better than letting physical separation or chemical process handle it alone in any plant because even though it’s the same purification process that occurs in nature, industrialization has greatly increased the quantities of pollution discharged today.

Today, industries with organic effluents mostly have secondary treatments in which it is not just the mere existence of microbes, but the mobility and consistency of suitable microbes that is very necessary as well. The popular methods involved with industrial wastewater treatment which are prominent with such effluents are Activated sludge process, MBBR, SBR and UASB etc, which all require secondary treatment with sound biology, where the microbes are not just confined to the biodegradation of compounds, but play a very important role in the following processes:

BOD degradation: 60% of the degradation of BOD and COD takes place in secondary treatment by the microbes.

Maintenance of MLSS: One of the primary jobs in secondary treatment which enhances and
maintains the overall biological cycle in ETP/STP.

Sludge degradation and wasting: Microbes very well ensure the process of sludge degradation
and minimalizing wasting procedures too and are very helpful in decreasing dumping costs.

Methanogenesis: Methanogenesis or methane production can take place in anaerobic treatment through microbes only, which act as a major energy source.

Capex and Opex: Industries tend to spend millions to install an industrial wastewater treatment plant and furthermore spend on extra hardware combined with manpower if results are not achieved. Microbial treatment in sound conditions reduces a substantial amount of Capex and Opex. 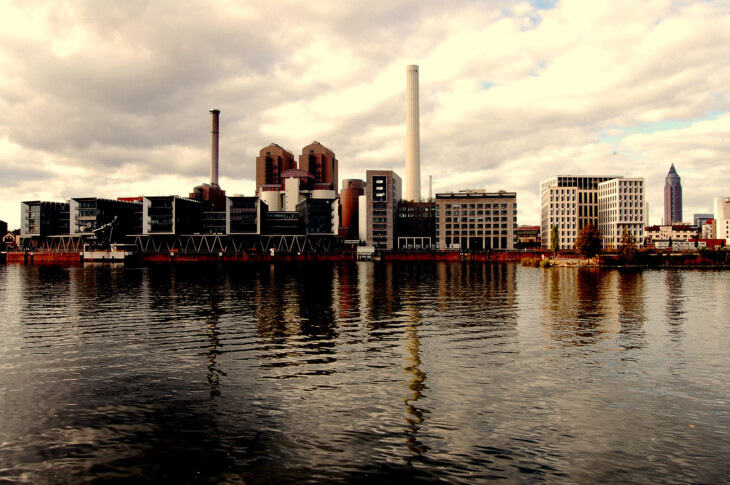 How to develop these Microbes and which one to select?

The answer is that they can be assimilated from different sources from outside in order to develop the biology in the system. Sources for the microbes include both natural sources and from the company’s manufacturing microbial cultures or products.

The sources are as follows:

1.Cow dung: high source of anaerobic bacteria.
2.Jaggery: Mostly acts as a food source for the existing microbes in the system
3.Flour: Acts as a nutrient source but still can be useful.
4.Enzymes: Many companies manufacture enzymes extracted from these microbes themselves.
5.Single strain culture: Such cultures consist of one type of strain only.
6.Multi-strain Bacteria: These cultures consist of multiple and facultative strains of bacteria.
7.Sewage water: Sewage water from STPs
Read more about Secondary treatment of industrial wastewater here: https://organicabiotech.com/wastewater-treatment/ 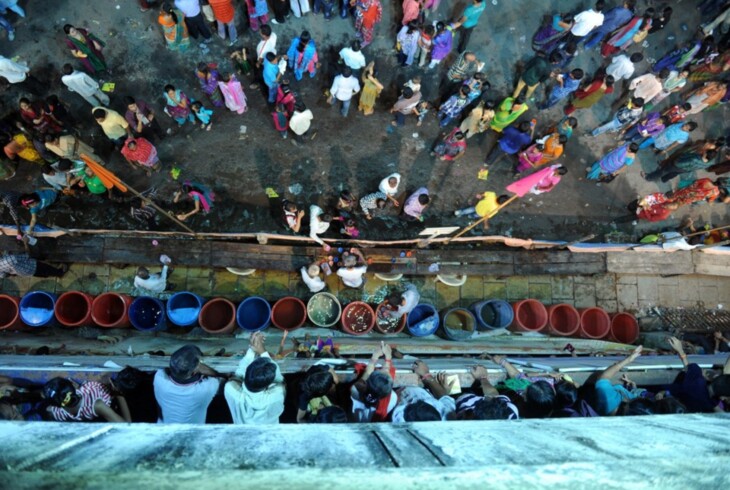 Picking the right ones for Industrial wastewater treatment:

The selection procedure of microbes depends largely on the following features:

On the whole, the right choice of microbes or a bacterial culture should be a facultative one with multiple strains. The reason behind this is a single culture with multiple strains have a higher efficiency of working in diverse conditions of effluents and tolerance towards a varying range of the mentioned physical parameters. Also, in terms of the media state of the culture solid or powdered form should be preferred, because in powdered form the microbes are in a dormant stage which provides them prolonged mobility and robustness. In the case of liquids, the bacteria are already live and hence require food to survive and lose their population and robustness even before assimilation into the effluent. People also debate for the addition of enzymes over culture as it is the enzymes that are released from bacteria that work efficiently. But in such a case, we will have to add multiple enzymes as a single enzyme can only perform a single function, which would require the addition of multiple products and can be operationally expensive. Also, the approach of applying the culture and achieving results should follow consistency for a given time period as most people tend to get results in a single day!!

We also need to keep in mind that both the hardware or the ETP process and the software or the microbial culture work in synchronization. One should not rely on any one of them and should ensure efficient monitoring and functionality of both aspects.

When people assess cost-effectiveness, cheaper products like cow dung or sewage water or cheaper cultures are preferred without analysing its constituents. These such sources always work on a Hit and Trial basis and might have reverse effects on ETP. For example, Cow dung has anaerobic bacteria which might not work in an aerobic process and may cause serious effects such as septicity etc. To summarize the entire selection process, it can be said that ETP acts like human bodies, the more accurate and customized the product you apply, the better results you will achieve. 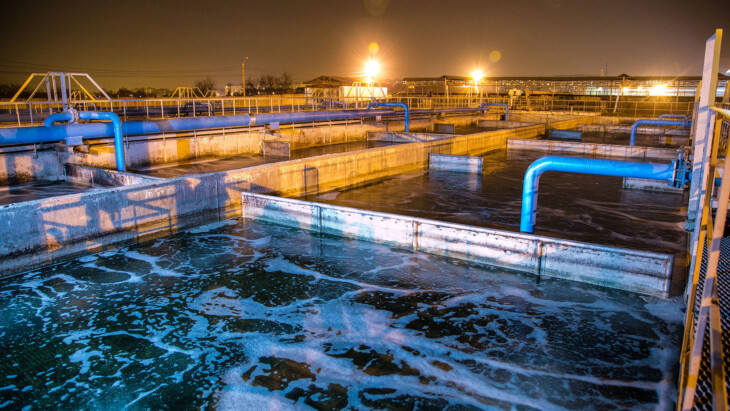 Industrial Waste Water Treatment Current Scenario (Global): Industrial Wastewater is now being recognized as a potential resource for economic and social benefits. A growing movement to reduce wastewater and treat the wastewater before discharge has been brought about by environmental and societal pressures.

Industrial Wastewater Treatment Current Scenario (India): Currently, India’s capacity to treat its industrial wastewater is at 37% with approximately 22,963 million litres per day (MLD). India also faces a requirement to treat a daily sewage generation of approximately 61,754 MLD according to the 2015 report of the Central Pollution Control Board. The cost of setting up Industrial wastewater treatment plants and restructuring the sewerage systems has been identified as one of the major challenges faced in India. The Centre for Science and Environment estimates setting up and building costs for an industrial wastewater treatment plant at Rs. 1 crore/million litres of wastewater.

Apart from these one of the biggest issues is the current mentality and lack of awareness and stringent measures of strictness from the government. Although CPCB and NGT are now on their toes and have become much more intolerant when it comes to water quality, the biggest slack is in the awareness of the proper treatment process for a particular type of industry. Though there is a significant increase in the investment for industrial wastewater treatment and a huge number of increases in companies providing such solutions but still industry-specific and problem-oriented solutions are way too far to reach. When we focus on industries with an effluent substrate where biological processes should control the majority of the treatment part, people are still beating around the bush due to lack of proper guidance, unawareness, orthodox thinking like all microbes are pathogens only, and reluctance. For proper hardware to work a strong software is needed, and for industrial wastewater treatment, the ETP/STP plants are the hardware and the microbes are the software. Microbes have always been underrated in terms of wastewater, but they are spades in it cause right from saving your money in expensive machinery to maintaining the health of your system, along with giving you smooth operations for ETP they give you everything. 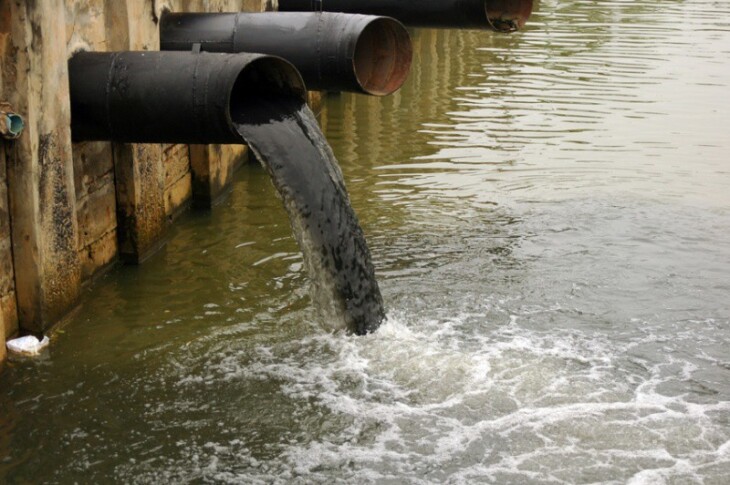 One should not deny the fact that Biological treatment is the heart of any ETP. If we are able to maintain a healthy heart, we will achieve smooth body functioning with extra longevity.

Angela Alexander Is Bringing Sex Swings Out of the Closet

How To Make Money In Real Estate 2022

Halitosis (Bad Breath) – How To Deal With...