Thoughts From Guys On Our IM: Do You Want A Woman To Cook For You?

Yet a man’s relationship with food causes us Frisky ladies to ask many questions. How can they not understand why we need to eat chocolate cupcakes every day during our period? Why do they think Nacho Cheese Combos count as food? And what should we whip up in the kitchen if we want to get laid?

I wrangled up a few dude friends — including a couple guys I dated — and picked their brains for answers. And, in the process, I learned that I’m making mashed potatoes all wrong, apparently. 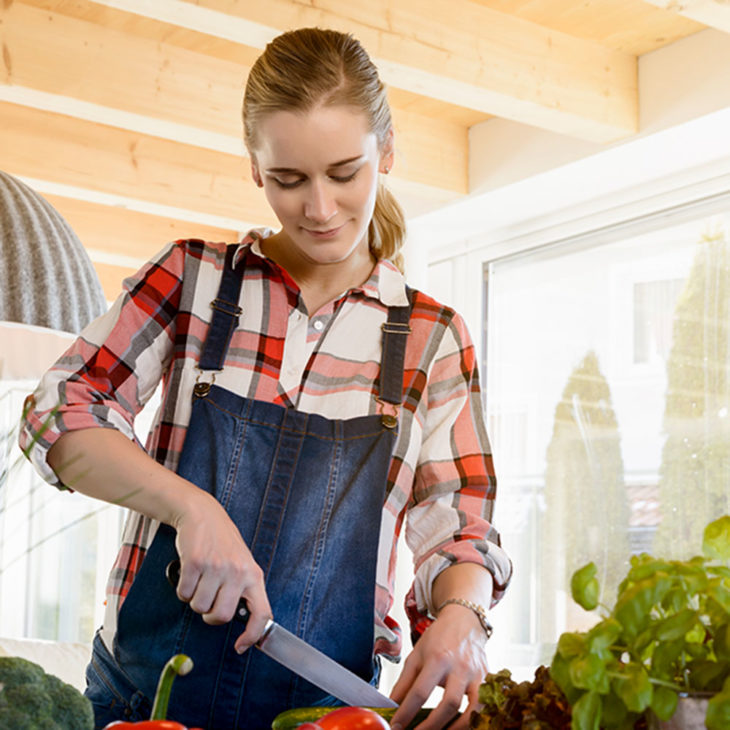 I am more into her for sure if she cooks.  However, if she cooks badly then I am grossed out.  All the women in my family can cook, so it is pretty important that if a woman steps in the kitchen she knows what a rice strainer is and why you should use it for mashed potatoes.

Umm … sure, I know why you do that … of course. Okay, so you are harsh and you’d dump a girl if she didn’t “wow” you in the kitchen.

Bad cooking is not a dealbreaker, but if someone else could come along that is five percent less hot but can “put her foot in it” — that is an African-American colloquialism for good cooking — then out with the old and in with the new.

Have you ever cooked to woo a girl?

Never to woo a girl … but to get a little extra head that night … you bet!

Oh, so that’s why you made me pulled pork one night. You’re sneaky. What other tricks do you have up your sleeve?

Not a specific meal, but if you get a girl some flowers and a homemade [no boxes!] chocolate cake, it can get you free blow jobs for about a month!

I wish you could see me rolling my eyes at you.  If a Frisky reader wants to get laid tonight, what should she make her dude?

A woman who can make a drink is hot as f**k … but cooking breakfast after a morning f**k is always in order! As the axiom goes, “The way to a man’s heart is through his stomach.” I take it as a huge sign of affection when a woman cooks me a meal. It doesn’t even have to be that big or complicated. A simple sandwich will do.

Hmm, has a girl made you anything fancier than a sandwich?

There was this one girlfriend that baked an autumn-themed pumpkin cheesecake. It had orange-colored frosting (not flavored), cobwebs made out of syrup, jack-o-lantern sugar cookies and plastic spiders on top to give it a cool autumn/Halloween look. It was one of the coolest and most creative things that anyone has ever made me. She totally earned a million awesome points in my book.

Would it be a dealbreaker if a woman sucked in the kitchen?

Luckily for me, I’ve never dated a girl that was a bad cook. Personally this wouldn’t be a dealbreaker. There are worse qualities in a potential lover than being a bad cook, like being an arsonist or a Tea Party sympathizer.

Do you do any cooking for your ladies? What do you make?

I like cooking, but I just don’t have the patience to do it after a long day of work. Actually my favorite meal to cook is a Saturday or Sunday brunch. I’ll wake up early, run to the grocery store, and cook up an epic weekend brunch that will lead to full stomachs, snuggling, movie watching and making out. I think this is a great way to spend a Saturday or Sunday morning/afternoon.  I’ve tried to woo a couple of girls with my culinary skills. The one meal that I was truly proud of was a coconut shrimp with marmalade sauce along with ice-cream and beignets that I made from scratch. I made a salad but I am fairly certain that no man or woman has ever been wooed before by a salad. At the time my roommate was a chef and coached me through the process. He owned so many cooking gadgets that I felt like I was competing inside of Kitchen Stadium like on “Iron Chef.”  Oddly enough it was the ice cream and beignets that sent her on a sexual riot on my body. I guess she had a sweet tooth.

I can’t remember a meal that has been cooked for me that I’ve thought “You, on the kitchen table, now!” But still … maybe it’s a kink, maybe I am a little more traditional than I thought, but the idea of a woman cooking for me turns me on. I am sure that plenty of women feel the same way when their man cooks them up something lovely. A couple of meals have been ruined by my frisky (see what I did there?) ways but that’s what take-out is for right?

If a Frisky reader wants to get laid tonight, what should she make her dude? 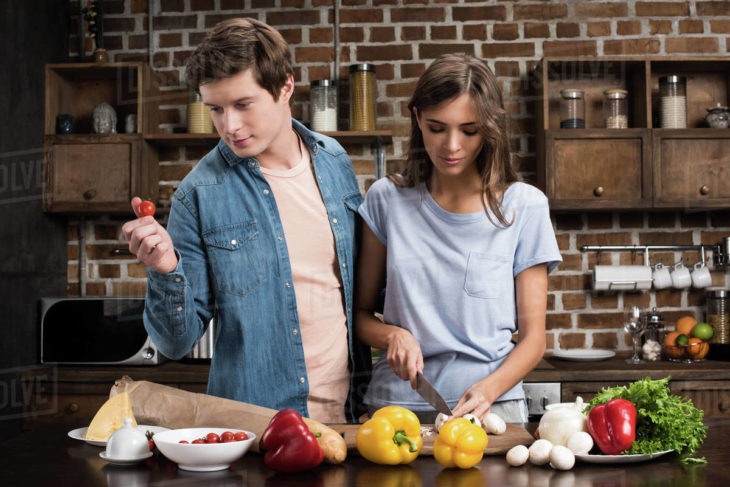 Certainly it’s nice, but it wouldn’t necessarily make me more or less into her. That said — and this has never  happened to me, luckily — if she was a terrible cook but insisted on cooking, that could be a dealbreaker.  Imagine you were dating someone whose cooking you hated! That would be a nightmare. Not sure how you can overcome telling your spouse they are a terrible cook, especially if they’re, like, into cooking. Ordering out would be a temporary solution. I’d probably develop a mysterious food allergy.

Have you ever cooked (dinner, brunch, dessert, whatever) specifically to woo a girl? What was it?

Can you remember a meal a woman cooked for you that made you want to bang her?

No, I don’t need a meal to want to do that. Usually it’s the process of cooking and drinking wine and lighting candles and listening to Motown records or whatever — that’s what serves as the aphrodisiac — not the actual meal.

If a Frisky reader wanted to get laid tonight, what should she make her dude?

Barbeque. Something involving fire. I suppose most guys would say something that includes juices dripping, dribbling off her chin, but that would be messy. And I probably just cleaned.

Thanks, guys! And male Frisky readers, let us know all your secrets in the comments.

Put All This Time Indoors to Good Use...