True Story: I Was A Mediocre Midwestern Stripper

I went to a college that was funded with money from a nearby casino. Unsurprisingly, the biggest neighboring city has a population of 30,000 people and 10 fully-nude strip clubs for them to attend. Regardless of how expensive the drinks are and how off-putting both the strippers and clientele are (one guy told me he’d actually SEEN a herpes outbreak on one of the strippers as she was rubbing the pole), the strip clubs continue to be the biggest source of tourist revenue for the area.

I didn’t get around to going to one until my junior year. The outing was suggested by one of my male friends. We went to Sirens*, one of the bigger clubs in the area. It was on the side of the highway in an industrial-looking building behind a power generator. Inside there were six stages featuring girls of all shapes and sizes.

My friend bought us a round of shots as soon as we sat down. Each one cost $8. There were a couple of guys there who didn’t look like they had $8. One of the strippers came over to talk to us. She introduced herself as Ivy, even though she had a massive tattoo on her back that said “Courtney.” She started telling the men that she was going to go have sex with one of her girlfriends that night, and that they should come watch. 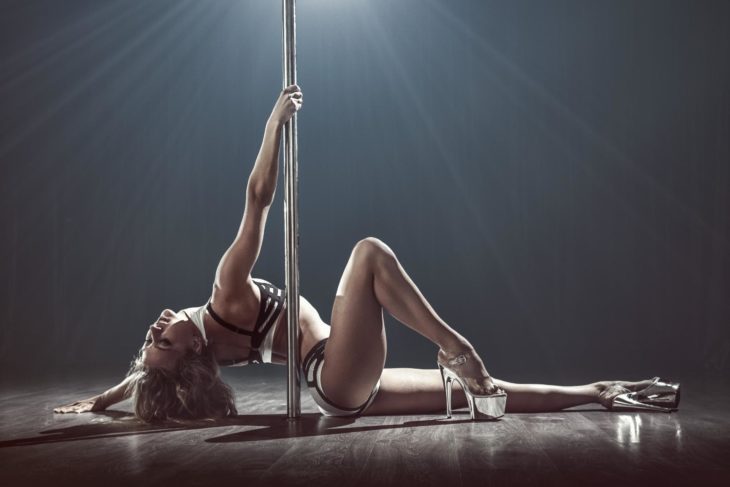 “She can’t possibly be planning on bringing your mangy asses home,” I said.

“Just the IDEA it puts into our heads makes us want to buy enough dances to have a chance,” he replied.

My friend coaxed me into doing an amateur dance. I jumped up on the platform, rubbed against the mirror, and took off all my clothes. The DJ (who was rumored to have fucked almost all of the girls who worked there and allegedly had a raging case of herpes) threw a bunch of $1 bills at me, adding up to $32 altogether. I noticed Ivy/Courtney standing nearby.

“Bravo, bravo!” she clapped her hands. “You should think about working here.”

“Seriously, I dare you to do it,” my friend urged.

Not one to refuse a dare, I agreed.

That Tuesday, I went to try out. The manager, a fat middle-aged man whose matter-of-fact manner made me uncomfortable (I thought you’d have to have a sense of absurdity to work there) copied my ID and gave me a contract to sign. Under my signature I wrote my new stripper name, “Delilah.”

I looked at the pictures on the wall as I stood in the dressing room. There was one of all the girls laying on their backs in a circle with their legs up, showing their vaginas. 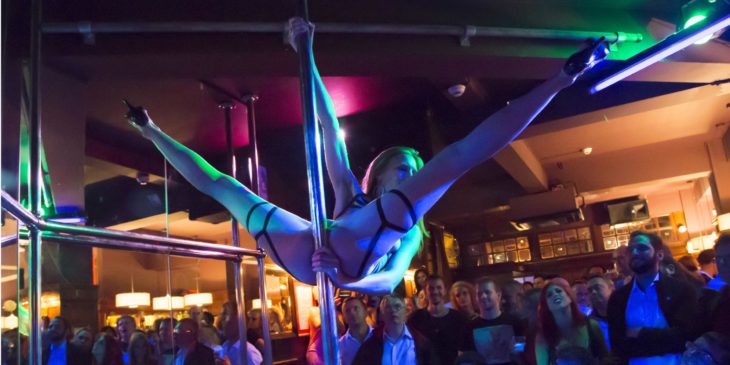 Just then, the humorless, female owner came in and explained that I had to give the house 15 percent of my cut at the end of the night. That meant I could keep about $10 of what I made from lap dances, $20 of the $30 I got from the private room, and half of the $150 a client spent to have 30 minutes in the champagne room with me alone.

Sirens’ champagne room was infamous. I’d heard that a lot of the girls filled “special requests” in there. There was a notorious chubby girl named Mercedes who would bring a client in there regularly and shove an equine glove up his ass. The only time I ever saw the mythical Mercedes was when she was puking her guts out into a trash can in the dressing room.

“She’s not pregnant,” said my friend when I told him about it. “She’s on coke.”

I wore a set of pink, silk underwear with roses for my first dance to Britney Spears’ “Oops I Did It Again.” For the second dance, I unhooked my bra and twirled it around my finger, then I shimmied out of my panties. I moved between the three guys at the front of stage and slowly bent over for them, stroking the backs of my thighs. I recognized one of the guys from the local town bar. I sidled up to him.“Come here often?” I asked.

“Not really,” he said with no irony whatsoever. “Only three times a week.”

The bastard didn’t ask me for a lap dance.

My next target was a guy standing by himself at the bar. He had a neck brace. I figured I looked pretty awkward, so my plan was to target the awkward customers. He looked at me sadly.

When my next dance came up, he left the club.

It was a dare! I wanted to shriek. I’m not really a stripper!

My next shift was on Friday night. I showed up, hoping to make bigger money, wearing my hottest lingerie set: a black lace bra and matching bikini briefs. But the owner yelled at me to put on a dress and thong. She handed me a polyester tube dress with Sirens’ logo on it, and a tiny Filipino stripper named Aleysha gave me a black g-string that she said she’d never worn. Another girl, a buxom blonde named Starr, came over to put makeup on me. I was wearing my favorite boots, but she gave me a pair of tacky, black heels instead.

The rest of the strippers cornered me. One of them actually said: “Let’s look at the new girl!” Ivy showed me how to keep my money in a garter on my thigh so they wouldn’t take it. 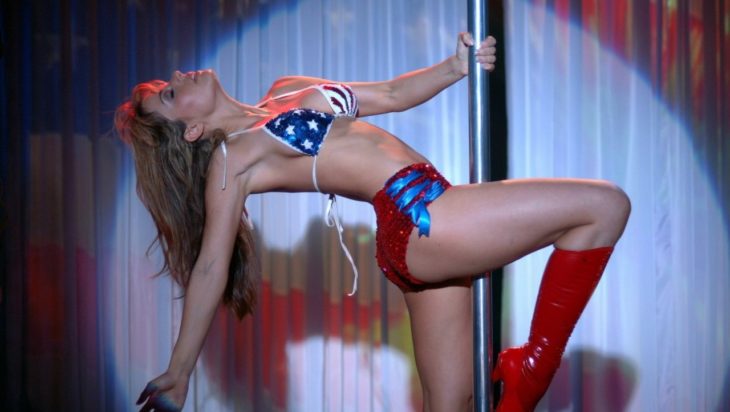 There were maybe 25 strippers there that night since it was a weekend. I was one of the younger ones at 21. I’ve always tended towards curvy, and I was maybe five pounds thicker than my ideal at that point. But there were strippers up to a size 14. One thing about Sirens that did impress me: they represented all sizes races. The oldest stripper was a beautiful woman in her late 30s. Her younger niece worked there with her.

There was a special guest stripper that night from Penthouse, and she happened to be dancing at the same time as me on the bigger stage. I took off my clothes and flashed my vagina to a room full of guys, but not one of them even looked my way. All eyes were on her. It was probably the most insulting thing I endured in my time at Sirens.

Over the course of my next couple of shifts, a few guys tried to get me to go to a hotel room with them. I gave five dances to a guy who spoke no English and whose tongue was hanging out, trying to lick my crotch. I got a private dance with some skeezy, old guy who told me he was a connoisseur of strip clubs. I laughed to myself thinking, Sirens is the ground chuck of titty bars. If you want the filet mignon you have to drive 100 miles.

My guy friend summed it up best. He said, “Being a stripper is like owning a hat shop: you have to have regular clients. And in order to keep your clients, you have to make them FEEL GOOD.” This seemed to mean that I had to listen to guy’s unoriginal pickup lines while making up stories about my sex life, or shoving an equine glove up their asses. Something I wasn’t so sure I was good at.

On my final shift, I was playing Ms. Pac Man in the back between dances, when a an Army guy came up to me. He said his name was Josh. He asked me for a champagne room. The strippers and the staff seemed shocked that someone wanted me in the champagne room. I beamed with unfettered pride as I took Josh’s hand and led him to the back.

Then I wondered what the other strippers talked about with clients. I couldn’t imagine being in this room with him for 30 minutes, making up lesbian sex stories. As I grinded on him, he told me about one of his friends who’d been shot in Iraq and lost a leg.

“I told you, it’s Delilah,” I replied. Then after a couple of beats I added, “It’s Gwendolyn.”

Josh asked me on a date. I got his number. I walked away that night feeling good. I made a grand total of $380, some of which I hid. I gave the bitchy owner 5 percent instead of 15.

The next night, I called Josh for a date. It turned out that we didn’t have anything in common at all. He was attractive though, so I agreed to get a room with him. But when he was in the bathroom it hit me: He just assumes I’m going to fuck him because I’m a stripper. 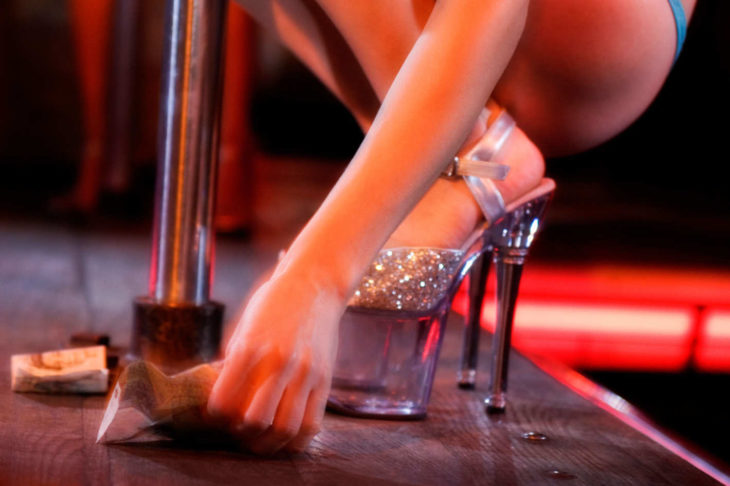 Under other circumstances I wouldn’t have been that offended that a man I was dating would want to fuck me, but this felt different because of how we’d met. I felt like a whore, and a cheap whore at that. When he got onto the bed I made up some story about not being over my ex and asked for him to drop me off at home.

That was when I decided I wasn’t going to go back to the club because there are some things I don’t need to experience in life to be a self-actualized human being. There are drugs I don’t need to do, countries I don’t need to visit, and sides of humanity I really don’t need to be exposed to. Despite the trope about girls stripping to pay for school, I was the one and only college student who worked at Sirens. Many of the girls seemed to enjoy stripping as a career, especially if it was their best option. I can see how it would be empowering for women who don’t analyze it too much. But I don’t know their stories, so I can’t say for sure.

A lot of strippers hate men, and I can see why. But there are plenty of guys out there who don’t enjoy paying for blue balls on a regular basis, and those are the ones I’d prefer to hang around.

The concept of strip clubs seems pretty ridiculous in this day and age. You can hire a hooker for sex. You can look at naked women online. You can find cheaper drinks pretty much anywhere. In low-to-middling strip clubs like Sirens, you see mostly local girls with few ambitions entertaining dull guys who don’t know any better. I’ve never been to a high-end strip club, where you see poor girls with big dreams entertaining rich men who feel entitled to everything. But that sounds a whole lot more depressing.