What Do You Do When The Things You Love Don’t Match Up With Your Politics?

I already knew, without acknowledging it, exactly, that Kurt Vonnegut and women were an awkward mix at best. Kurt Vonnegut didn’t write women well — he wrote women who weren’t fully people, exactly, but more a physical manifestation of the mystery women seemed to him to be. It’s not to say that he didn’t get along well with women in real life. There was just a lot missing in his characters. Mona Aamons Monzano from Cat’s Cradle, for instance, is practically a demi-god, more an embodiment of the narrator John’s checklist of things to desire in a woman than a real woman. Vonnegut was acute enough to be self-conscious of that, and write it into the narration, albeit uncritically. Mona gives of herself, of her body, as a matter of course, and doesn’t act in anything even approaching a self-concerned way until the very end. I loved her for talking back and standing for her principles in an impossible situation. I’m not sure if that’s something Vonnegut wrote or something I gleaned out of Vonnegut’s writing. 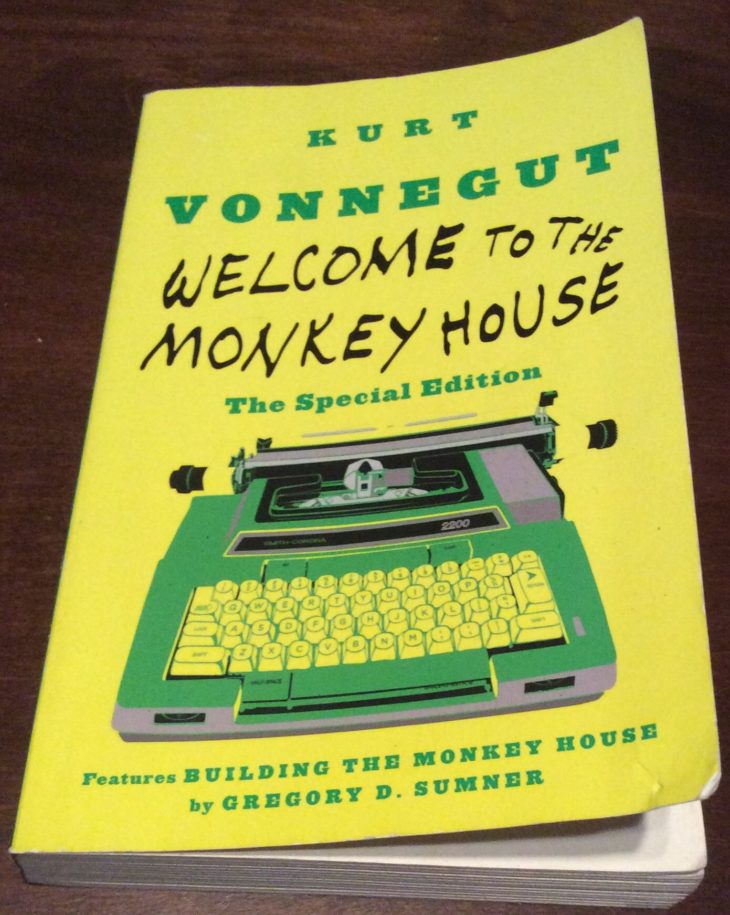 I’ve never read his legendary short story, “Welcome to the Monkey House.” I have carefully and conveniently avoided “Welcome to the Monkey House,” in fact, because even a cursory glance over a synopsis of the story is enough to tell me that it will taint my deep and abiding admiration for Kurt Vonnegut. It turns out that’s a fair assessment, too: In Kathleen Founds’ And Yet, she describes exactly what it is about “Welcome to the Monkey House” that demolished her vision of Vonnegut as saint. The story is about corrective rape, essentially — the idea that rape is a cure for female frigidity. That is a real-life horror, by the way, the possibility of which lesbians and butch women especially have to live with. Founds explains:

Perhaps the most disturbing element of “Welcome to the Monkey House” is that it depicts rape as a corrective measure that restores women’s “natural sexuality.” Corrective rape is not just an invention of science fiction — it is an ongoing human tragedy. A Human Rights Watch report titled “’We’ll Show You You’re a Woman’: Violence and Discrimination Against Black Lesbians and Transgender Men in South Africa” explains how corrective rape is used as a tool of social control to police “deviant” sexuality. The report details the story of a lesbian named Vicki who was raped by her best male friend. Vicki states, “During the rape he said, ‘This is what you should be feeling. Hopefully now you’ll be with a man.’ I had a bust lip. He hit me over the head. I had known him for years.” Another young lesbian shares how her community responded when she began dressing in men’s clothes: “Men say, ‘All you need is a good dick and you’ll be okay.’ One man warned her, ‘If I bump into you at night, I’ll rape you so you can be straight again.’”

Did Vonnegut know in 1968? Did he know when he died, in 2007? I can’t help but think of Vonnegut as a good man, a normal man, the average man — and I equate those things, as I assume that an average, normal man is basically a good person — who was writing in the context of a culture that propagated myths about women’s sexuality that hurt, endanger, and traumatize women. I can’t help but believe that if he were alive right now, he would listen. He was the author who told the world that we’re all together in our suffering, and for that reason alone, we should be compassionate and kind to each other. More compassionate than to excuse rape as a corrective measure.

At some point in your life, you have to make the decision about how to cope with our racist, sexist, transphobic, homophobic, Islamophobic, anti-Semitic, Orientalist, appropriative, ableist, ageist, classist, capitalist, politically repressive dominant culture. You can accept it as it is and work with it, or even laud it, if you happen to be white, male, cis, straight, Christian, normatively abled, young, educated, capitalist, lower-case “democratic,” middle-class and OK with benefiting from the fact that it’s set up to make life easy for you, assuming that it’s just as convenient for everyone else and everyone else has just been too lazy to “do the work” to get ahead in the world. Or, alternatively, if you plan on trying to team up with those white/male/cis/straight/etc. people and picking up the scraps they hand you in order to get by.

Or you can decide not to think about it and not to care and just kind of roll with it.

Or, you can decide that it’s unjust and unequal and do your best to correct injustices and inequality. And in that case, there’s a whole lot of our culture that you’d have to reject in order to be politically pure. I spend the majority of the time that I’m consuming culture waiting for the other shoe to drop, and it usually does. Every time I watch a male comedian’s set, I’m waiting for a boring, tired sexist trope that isn’t funny to anyone but men who are blithely sexist, and usually they deliver. When I watched Gary Gulman’s “In This Economy?” I actually exhaled with relief when we got to the end, because he managed to spend his whole set making funny jokes about things other than how women are shrill, narcissistic, demanding, bossy, clingy, or in one way or another stupid. I don’t watch TV anymore because if the show isn’t chock full of white male whining about how our culture that doesn’t prey on them is unfair because it allows other people the freedom to criticize them (how dare they), the commercials will be chock full of gross stereotypes and bad jokes. I have to accept a lot about movies rather than just enjoying them. I curate my reading to avoid authors like Cormac McCarthy, whose writing is compelling, but the content is alternatively boring and offensive, and I can’t bring myself to sacrifice caring about the content because the style is worth studying.

Don’t worry, I’m done berating (or whatever) white guys. I don’t expect a culture that’s perfectly aligned with my politics, and I can’t tune out things that I don’t agree with. Of course, the people who fit into that dominant culture — they can. They can tune out things that they don’t agree with. They can dismiss trans* people as fakers, rape victims as liars, Black people as thugs, poor people as lazy, Muslims as violent radicals, non-normatively abled people as basically non-entities, gay people as perverse, old people as senile, and socialists as dangerous, all of them as people who just don’t matter and who are getting in the way of progress (“progress” meaning more profit and political say-so for members of the dominant culture). That contradiction, that hypocrisy, is what makes it grating to have to cope with the dominant culture. That contradiction is what results in eye-rolling paragraphs like the above.

So what do you do when the other shoe drops on something that you really love? To me, it’s an issue of living intellectually in a space where, for instance, you can acknowledge that Vonnegut dealt heavily with the theme of masculinity in his writing, and that our culture’s construction of masculinity is complicated. It has positive aspects, like a sense of kinship or “brotherhood,” as well as negative — like the entitlement to write a rape at gunpoint, call it a “deflowering,” and paint it as the rapist helping his victim. It’s an issue of constantly living in an interstice between the positive byproducts of the dominant culture and the negative, and trying to invite members of the dominant culture into that interstice so that we can talk about it. The conversation goes something like, “I really admire your work ethic. Did you know that other cultures have a different way of framing the idea of a work ethic?” or “I appreciate your concern for people who are accused of crimes they didn’t commit. Have you considered focusing your concern on the culture and the institutions that dehumanize criminals rather than the people who the accused might have hurt?” It’s not usually a conversation they want to have.

But I hope that maybe, if we just keep having the conversation, and we have it in spaces that are supportive of the conversation and of diverse viewpoints, and we keep inviting people into the conversation, and maybe learn to stop rolling our eyes at the people we’re trying to talk to long enough for them to actually feel welcome in the conversation and settle for rolling our eyes behind their backs (that goes for everybody, the privileged and the marginalized both), maybe, maybe, maybe, by the time my great-grandchildren are 27 years old they’ll be able to create and consume books and movies and art and comedy without it feeling like walking a tightrope.

Science ‘N’ Stuff: 10 Very Important & No Doubt Stupid Questions I Have About Our Mirror Universe

Nicole Scherzinger Is Starring In “Cats” In London