When is the vice presidential debate? Tim Kaine and Mike Pence will only face off once

Donald Trump and Hillary Clinton’s general election presidential debates kick off Monday night and will no doubt prove extremely entertaining, if not vomit inducing. If you’re already over these two and want to see how their number two men compare to one another, you might want to know: When is the vice presidential debate? Tim Kaine and Mike Pence, both kinda boring white dudes in their late-50s, will only battle on stage once, so make sure you don’t miss the possible snoozefest, but probably important political event.

The one and only vice presidential debate will be Oct. 4 from 9 to 10:30 p.m. ET, just like the first presidential debate. The exciting shindig will take place at Longwood University in Farmville, Virginia, Kaine’s home state. Debating in your home state is only beneficial in that the crowd is more likely to cheer for you (if they like you, that is), which can give the impression that you’re winning even if you aren’t really. Both men are usually pretty calm and aren’t known to trash talk, but you truly never know how a political event will go these days.

CBS News anchor Elaine Quijano will moderate the 90-minute debate, breaking it down into nine 10-minute segments each covering a different issue. 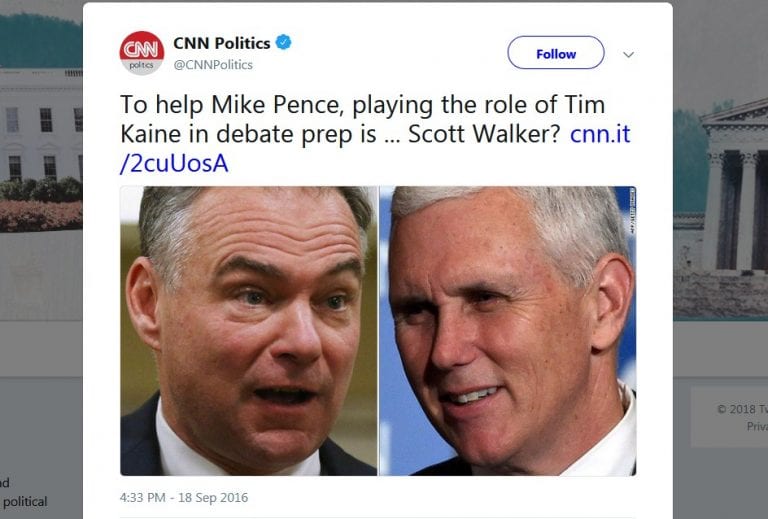 In case you’ve been avoiding this election like it’s the plague (I mean, you aren’t entirely wrong), Kaine is a 58-year-old senator from Virginia who previously served as chairman of the Democratic National Committee and governor of Virginia. Mike Pence is the 57-year-old governor of Indiana, having previously held a seat in the U.S. House of Representatives for his state. Both are groomed politicians, and both have perfectly groomed grey hair.

Since Kaine and Pence tend to be so mild mannered, whichever one can really convey enthusiasm, authority, and likability to the viewers at home will probably walk away the winner. They’ll have to try to attack one another, or at the very least each other’s respective presidential candidates, so hopefully things will get a little heated to spice the night up a bit. Vice presidential debates don’t necessarily make or break presidential campaigns, but tanking wouldn’t be great for Team Trump or Team Clinton, either. Basically, as long as neither one makes a total ass of himself, they’ll be fine.

More details about how to watch the debate will be available closer to Oct. 4, but every news station will likely broadcast the event live.

This Dog Bears An Uncanny Resemblance To Vladimir...

The Middle Finger – A History of Flipping...