White Supremacists Are VERY UPSET About Some Nickelodeon Show

A Nickelodeon show about a cheerleader who becomes the quarterback of her school football team has some crazy ass racists up in arms and getting very upset on the internets – and I have to say, as evil as they are, this is so stupid it’s almost hilarious.

I mean, I don’t know about you, but I have a kind of odd fascination with people who think completely insane things. Like, my actual favorite thing right now is this comically sincere video someone made about how the ending of Michael Jackson’s “Black or White” video is a secret message to the Illuminati.

Anyway, David Futrelle of We Hunted the Mammoth reports that on Tuesday, Heartiste – a sad dude who made a name for himself trying to teach other sad dudes the art of “game” and picking up chicks but who is now also trying to carve out a place for himself in the world of histrionic internet racists – posted an article decrying the Nickelodeon show “Bella and the Bulldogs.”

Heartiste and others of his ilk are claiming that the show – a show for children about a perky blonde cheerleader who becomes a football player – is promoting “race cuckoldry” because said perky blonde cheerleader’s potential love interest is a black kid. Said show, they claim, may be the final straw before they all feel so oppressed by progressivism that they will be forced to Nazi us or something.

Bella and the Bulldogs, besides promoting anti-white (and consequently pro-black (heh)) race cucking, wallows in a panoply of filth and lies. Ridiculous grrlpower fantasy? Check. Weak whytes? Check. Evil redneck whites? Check. Numinous negros? Check. Transgenderism? Good lordnbutter, we may have to check that one off too.

Keep in mind, Bella and the Bulldogs is a children’s show. Your little white daughter, apple of your eye and continuance vessel of a glorious heritage of European civilization, sits zombiefied in front of the TV imbibing this sewage by the truckload.

Do the Western cultural elite have a death wish? Do they WANT normal, good people to hate them with a fury? Because that’s what’s gonna happen if they keep it up. And the washout won’t be pretty in pink.

It’s time to turn to lessons from Weimar Republic Germany, and the cataclysm that can bring doom to the earth when a native people feel cornered and despised by their own elite and the dominant culture. The Lamppost Swingularity… the point at which the intensity of leftoid propaganda exceeds the tolerance level of the targets of leftoid hatred… is closer than you think.

However, they think that the Nickelodeon show is like, some sort of recruiting tool to get preteens into this particular fetish, because they are insane. In fact, they are so batshit that they think that the numbers on the kids jerseys have special illuminati meanings. 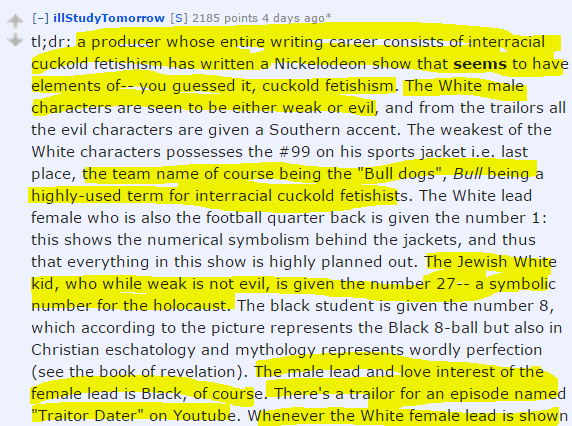 As Futrelle points out, this isn’t just like, one or two people complaining about this, it’s a whole slew of them, and they have videos and tons of conspiracy threads and everything. This is their world, and it sure is a pathetic one.

[We Hunted The Mammoth]

Nickelodeon Stars Then And Now