Would You Take Your Dog’s Teeth Out So He Couldn’t Bite?

Cotton is a white poofball, an American Eskimo dog with perky eras and a long, lolling tongue. But underneath her cuddly exterior masked a mouthful of sharp teeth. Small-child-shredding, lawsuit-spurring sharp teeth.

Cotton’s owners tried all kinds of things to stop him from biting: a muzzle, puppy classes, books, videos, a dog aggression expert, a low protein diet and even an herbal remedy. They even tried less, uh, kind routes, like pepper spray and empty soda cans filled with rocks. (Jeez.) But nothing makes Cotton chill out.

So Cotton’s owners, the Krieger family, did something unusual. They had a doggie dentist zap away four millimeters of the pooch’s teeth using a laser. The Krieger family said they didn’t want to euthanize their dog, nor would most rescue groups take animal with a history of biting. So Cotton’s mommy looked into canine disarming, the practice of lasering off a dog’s sharp teeth, which is performed by a veterinary dentist. It cost $1,600 for Cotton’s four canine teeth to be taken off and then packed with something similar to a cavity filler. 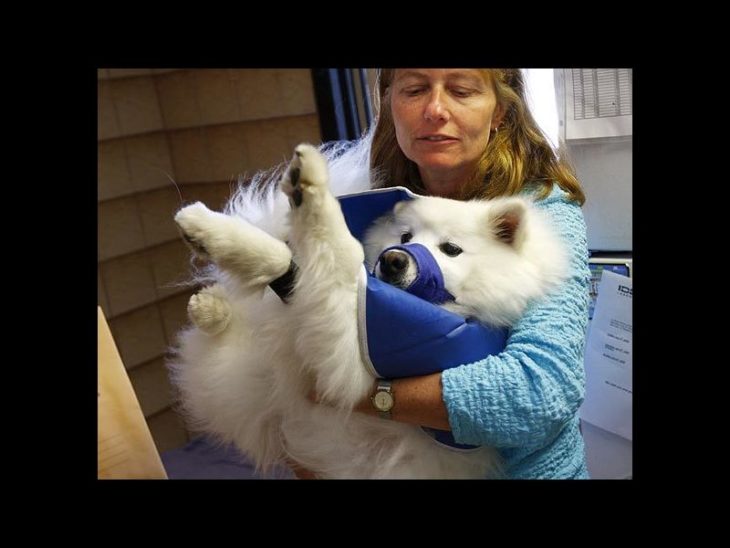 It sounds like the Kriegers made a good faith effort to find out why their dog is so aggressive, so this would be a special case. But as someone who grew up with a bunch of dogs and cats at home my whole life, I’m uncomfortable when people “de-” anything their pets: de-claw, de-tooth, etc. If that animal gets loose from its owners, it needs the weapons nature put on its body to survive outside. They’re animals, not toys to be configured to suit your wishes. Taming an aggressive dog is more understandable than stopping a cat from clawing up the Barc-a-lounger, but in general, I don’t think it’s fair to do these things to pets. Maybe families just need to admit it’s not a good fit?

Not surprisingly, the LA Times checked back in with Cotton and the Kriegers and learned the doggie still attacks people—he just can’t hurt them as badly anymore without his four canine teeth. Unfortunately, it seems like the whole process was for naught. [LA Times]

What do you think? Do you think canine disarming is something you’d do to your dog?

Why Do Famous People Give Birth To So Many Twins?

Miley Cyrus & Max Azria For Walmart Is A Lotta ‘Meh’