Valentine’s Day is almost here–and you know what that means! Piles and piles of listicles suggesting romantic tips for couples looking to spice up their love lives. Most of those suggestions will be either awkward or terrible. Then again, so are–I would say–the vast majority of things traditionally considered generically romantic and/or sexy. For example…

1. A Bed Covered In Rose Petals 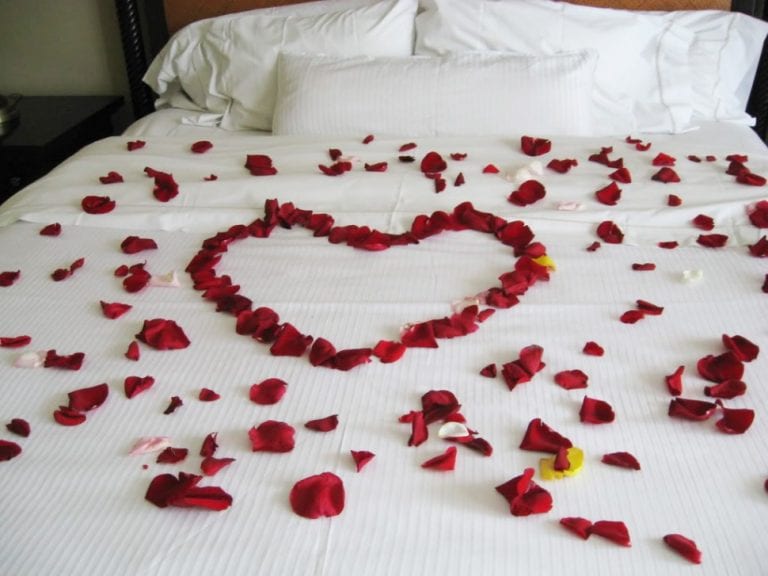 Who the hell is going to clean this up? Think about it. You make your grand romantic statement, sure, but then you end up having to spend the whole next day cleaning up rose petals, some of which may be lodged between your butt cheeks. You’ll probably find withered rose petals everywhere for at least a month. Not to mention the fact that those white sheets are fucked.

Usually when they show this in movies, there’s like, a trail from the front door to the bedroom. Can a vacuum cleaner even handle that? I’m not sure.

Also, like, how good of a time can that even be, when you really think about it. 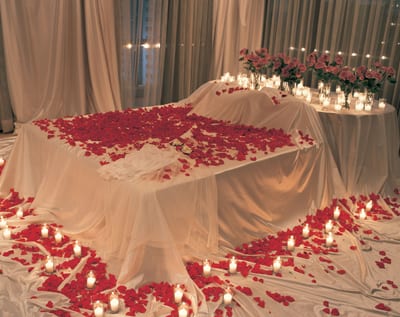 Look at this! It’s a deathtrap!

Whenever I see people on TV getting it on in a room full of candles, I cannot help but feel panicked. One errant leg, and up you go, in flames. Possibly dead. At the very least, scarred for life. Then you have to spend the rest of your life explaining to people that you are all burnt up because someone thought it was romantic to put candles all over the bed.

Mattresses are really flammable you guys. 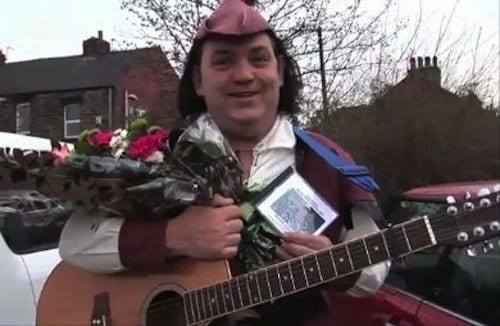 Awkward. You can trust me on this, because one time I broke up with this dude (at a bar, to avoid a scene and allow me an easy exit) and instead of dealing with it like a grown ass person, he started singing to me. Not a good time.

Also — and I say this as someone who bursts into song somewhat often–being serenaded means that you sort of just have to sit there and pay attention, and try to look interested, while also feeling incredibly awkward. Like, I hate people singing “Happy Birthday” to me, and this is definitely worse.

Possible exceptions can be made for karaoke and people who are actually in bands performing shows, as long as it’s not done in any kind of creepy way. 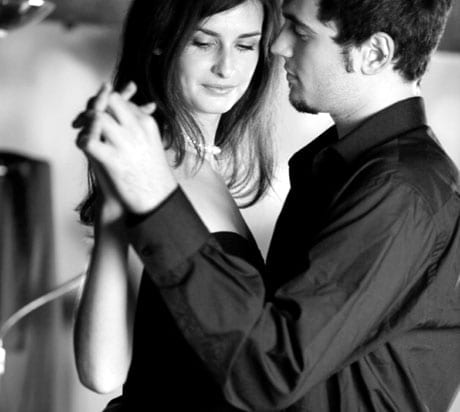 This one time, I went home with this guy and he tried to make me slow dance with him to “Lady In Red” (because I was wearing a red tank top- GET IT!) and I wanted to die a thousand times.

I mean, I guess it could be OK in some situations, for some people–like maybe if they have been married for a long time and are trying to bring the romance back–but definitely not a thing you want to bust out on a first date. Especially if Chris De Burgh is going to be involved without a hint of irony. Trust.

5. Anything John Cusack Has Done In Any Movie, When You Are Not John Cusack 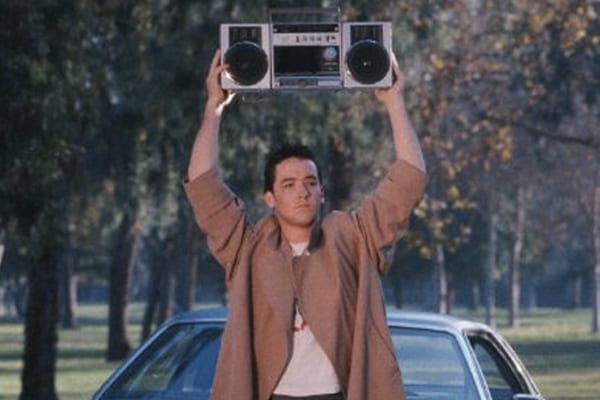 If the movies were real life, there would be like, 10,000 restraining orders against John Cusack. Like, basically every classic Cusack movie involves him stalking a lady and crying in the rain a lot until she gives up and loves him back. This is a poor idea, and you probably cannot pull it off if you are not actually John Cusack.

By and large, most poetry is terrible. I’m going to say something like 95%. I guess if you’re like, a published poet that is one thing, but your amateur romance poem is probably awful and embarrassing. Especially if it rhymes and is 100% sincere.

Haikus are OK though. 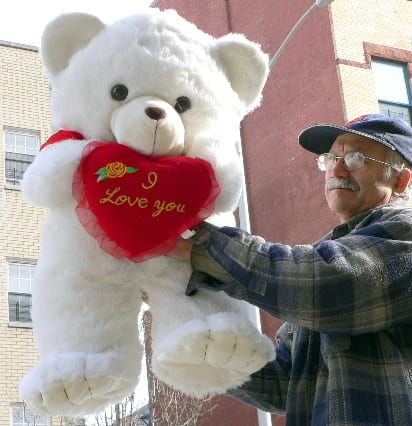 HI. I’m an adult. Where the fuck am I putting this? I would say that even a small teddy bear would mess up my whole decor. Also, I am going on record as saying that it is messed up for adults to have non-collectible stuffed animals. Like, I will not hate on your mint-condition Wuzzle in it’s original packaging, but if you’ve got them lined up on your bed, you probably have some issues you need to work through.

8. Same Side Of The Booth Sitting 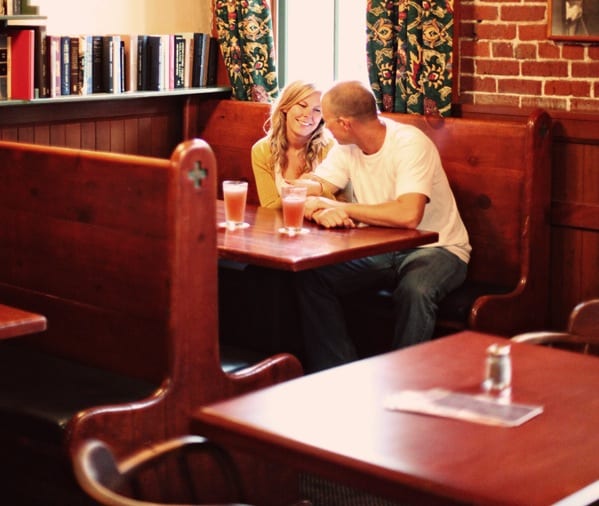 For real, this is for jerks. Nothing says SEXYTIME like a fruit roll-up on your junk! I honestly wonder if anyone has ever legitimately used these as anything other than a gag gift, and how that worked out. Because it’s not like you can just happen to have them on. No. You actually have to do the whole “HOLD UP, DUDE– let me go slip into something a little more comfortable” thing, and then come back in the fruit roll-up undies. And then I guess he’s supposed to go “Aha! Normally I am not a fan of the cunnilingus, but if there’s a fruit roll-up involved, sign me up!” or something.

Also, now they have ones made out of candy necklace candy, which also seems like a poor time. I mean, it’s not like you can eat a lot of that.

10. Most Sexytime Food, In General 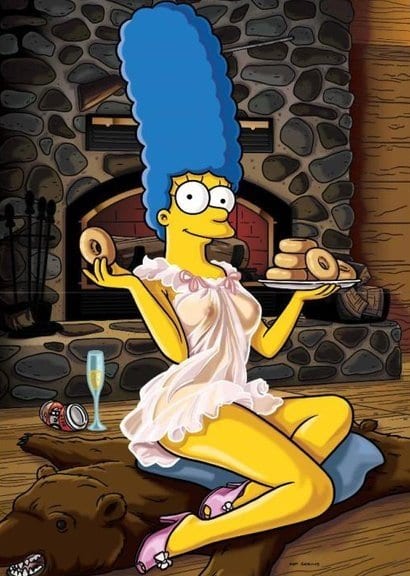 One of the best tips I have ever read in Cosmo was the one where they suggested putting a donut on a dude’s junk and then eating it off. I mean–first of all–donuts have really small holes. Second–not a lot that’s sexy about crumbs in a butt crack.

Generally speaking though, Cosmo is almost always suggesting you use food to spice up your sex life. Which is actually not a good idea for the most part, as according to Dr. Sue Johanson–of “Talk Sex With Sue Johanson”–getting sugar near your lady junk is actually a poor idea. Also, if you’re using a condom, it could render it less effective. I can’t find a specific source for this, but I watched that show in college pretty constantly, and she said it a lot. 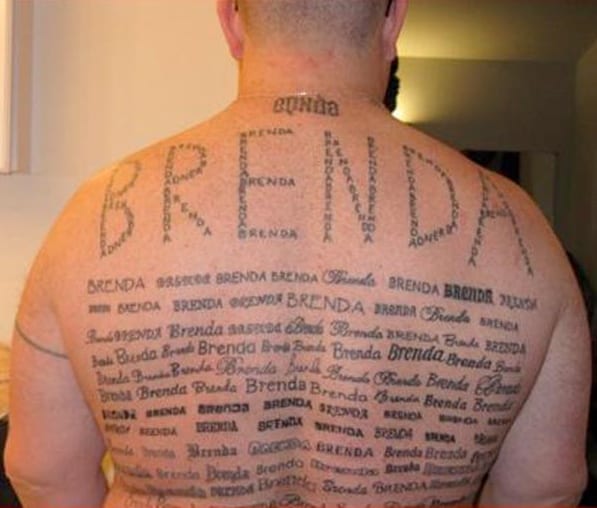 You would think that at some point people would realize that if you get someone’s name tattooed on you that you are basically begging for an incredibly awkward break-up, probably in the near future. The only circumstances in which this is an acceptable form of romance is if you and your spouse have been married for 60 years and probably going to die soon. Then, probably, you can be sure enough of your love to warrant a tattoo.

10 Problems All Goth Girls Face During The Summer

How to Impress Your Fiancee on Valentine’s Day

10 Tips and Tricks for Using Candles in...