@phagmob generalizing ANY race by calling them one sterotypical name for said race. i personally dont think is very cool, the end.

@phagmob girl BYE. do you know how many time ppl have called me BECKY? it didnt have any kind of positive intention behind it. dont start.

@rNicaRo the whole becky thing “give me that becky” comes from white womens supposed love for blow jobs. so excuse me but, i dont want

Alright, if I must, allow me to quickly parse the lyric itself, since Iggy decided to make it all about her. In the context of the song “Sorry,” “Becky with the good hair” refers to the other woman that Beyoncés man (presumably Jay Z, if LEMONADE is indeed explicitly biographical and about her marriage) is cheating with. Yes, “Becky” has been used as a generic slang term for white women, including by artists other than Beyoncé, and sometimes, more specifically, white women who give a lot of blowjobs. But what “good hair” means to the Black community, in particular Black women, as Rebecca Thomas at MTV points out, is far more complex than what Iggy’s two braincells put together. She writes:

The idea of good hair actually has its roots in slavery, when white owners would deliberately separate and assign slaves with light skin and straighter “good hair” to household work, leaving the punishing field work to those with darker skin and kinky African hair. …

These damaging messages were passed on for centuries, and black women and girls in particular had to do the work of deprogramming. …

So when Beyonce tells her cheating man he “better call Becky with the good hair,” she’s nodding to our historical baggage and signifying far more than just a girl with a bouncy blowout.

So, for starters, Iggy Azalea’s assumption that Beyoncé’s use of “Becky” negatively refers to white women who suck dick is a pretty goddamn simplistic and self-centering interpretation, surprise surprise. But regardless of what in the hell Beyoncé meant, racial stereotypes about white people do not have the same impact or consequences as stereotypes about people of color, because white people are not oppressed by a racist system. To conflate “Becky with the good hair” with actual racism is DUMB AS FUCK and yet:

And of ALLLLL people to call out Beyoncé for racist stereotyping, Iggy Azalea? Quite a hypocritical hill to die on, Amethyst. Iggy has not only tweeted straight up actual racist shit herself (Mic has a good roundup of Iggy’s tomfoolery), but she’s made an entire lucrative career out of her totally painful Southern Black woman impression and appropriating Black culture overall. So, like, it’s really hard to muster a single fuck that Iggy is sad about being called “Becky.” Go home, girl, I hear Australia’s nice this time of year.

Meanwhile, Twitter naturally took Iggy to task. Here are some of my favorite responses:

How nice of Iggy Azalea to talk racial stereotypes when she feels affected. As she profits off a poor imitation of a southern Black woman. 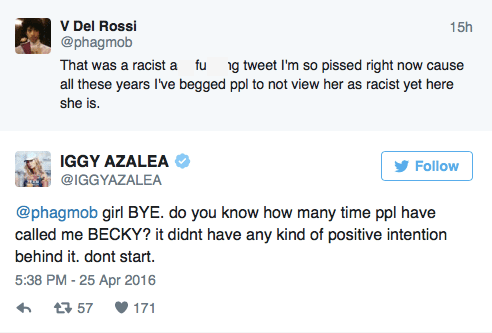 Your whiteness is fragile AF

Iggy on being called Becky: pic.twitter.com/2zvsJ07822

Iggy’s can’t see an issue her MANY racist statements towards multiple POC groups, but can reach to find racism in “becky”….aight

“iggy azalea doesn’t think beyonce should call white girls becky”
A. who asked you
B. what if their name is becky

Apparently we gotta cc: Igloo Australia into the flowchart of who’s opinions on lemonade anyone gives a shit about https://t.co/hA3STTOKxy

She said Becky with the good hair not Igloo with the rank weave https://t.co/tbJxjMgliX

Becky is the one with the good hair, Igloo. https://t.co/4oZzLD3SWr

Pray Tell: “Spring Breakers” And The Faith of Faith

10 Lessons Only A Slut Can Teach You