A Father’s Blessing: Sexist Tradition Or A Sign Of Respect?

Over on AskMen.com there’s this article all about the importance of asking a father’s permission for his daughter’s hand in marriage, a tradition I guess I wrongly assumed was as relevant as outhouses and chastity belts. According to the article, “while the traditional reasons for asking are now obsolete, popping the question to [a woman’s] father is a sign of respect and should be thought out and prepared for.” The writer (a woman) gives some tips for overcoming any anxieties a guy may have for “popping the question” (ew) to his girl’s dad.

First, she suggests sort of pre-asking his girlfriend to make sure they’re on the same page. “Asking for permission only to have your proposal turned down is just an awkward day for everyone,” she explains. After same-page-ness has been assessed, the guy should arrange to meet his girlfriend’s father alone, perhaps over “a round of golf or maybe for a couple of beers at a pub.” But don’t show up empty handed, she warns! Bring him some wine or cigars to “soften him up before you pop the question.” Enough with this “popping the question” bulls**t, it’s gross!

The article suggests that after softening up his potential father-in-law, a guy should flatter him! “Complimenting his daughter reflects favorably on how she was raised, which is a compliment for dad as well.” But steer clear of praising his daughter’s physical attributes! Instead of saying, “You did a great job raising a daughter with such a beautiful rack,” compliment him on how “smart, kind and loving she is.”

Now’s the time to make your move! Be confident and bold! Remind your future father-in-love how much you care for his daughter and then ask him for his blessing to “marry his little girl.” Be prepared to seal the deal with a handshake or a firm hug, but DO NOT kiss him, the article warns. And for the love of god, do not “jump up and down like a little kid.” If he rejects your proposal, “gracefully accept his response, especially if you decide to proceed with the proposal.” 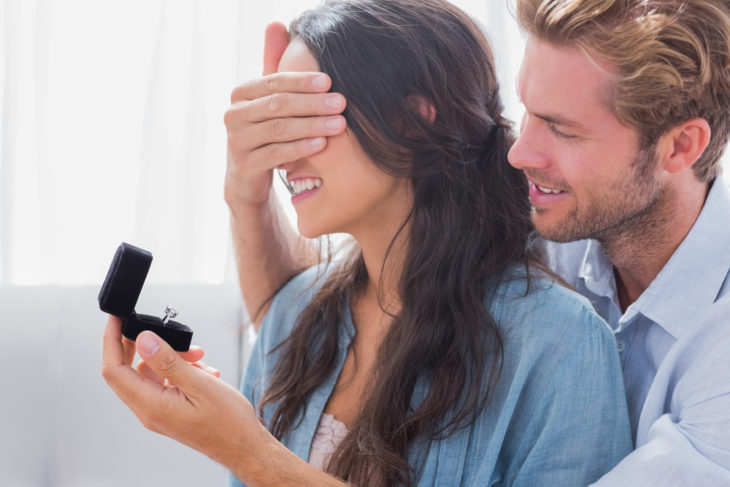 So, I guess I don’t really get it. If a guy is going to proceed with a proposal whether the father gives his blessing or not, what’s the point? And what’s with this whole man-to-man crap? Does a mother’s blessing not matter? Do people really still practice this antiquated tradition? And if so, why??

Girl Talk: What’s In A Name?

Three Words We Don’t Want To Hear After Sex

Romantic Gifts That Will Make Her Heart Skip...