As I’m sure you’re well aware, there are many good reasons to have sex. In fact, sometimes you don’t need any reason at all—other than, say, loving your partner.

However, sometimes a lady finds herself doing all the right things for all the wrong reasons. That’s what we’re here to cover. So if you find yourself in any of the following situations, please extricate yourself as quickly as possible:

The most popular very-wrong reason to have sex, revenge sex never ends well. Hooking up with his best friend because you’re angry at your boyfriend will get you nowhere. If you do manage to break up their friendship, then you’re stuck with an untrustworthy dude (if he did it to him, he’ll do it to you). Even worse, there’s always the (strong) possibility that he went right back and told his buddy and the two of them are now comparing notes over high-fives and hot wings.

I’m not knocking or talking about the sex professionals out there—this is for the amateurs among us. Just because he bought you a lobster doesn’t mean you need to give up dessert. Catch my drift?

You must be fine if that scorching hot bartender took you home. Or not. Men have been known to do some unsavory things for physical gratification—surely you’ve heard the recent story of the guy who tried to fornicate with a park bench? The fact that he’s willing and able doesn’t say squat about your appeal.

Your roommate “doesn’t believe” in air conditioning. You can’t afford premium cable and are addicted to “Weeds.” You’re desperate to try out Wii Fit. All of these desires are perfectly rational. However, they are absolutely not worth the price of waking up next to someone you otherwise cannot stand. (Well, except for the AC, but that’s only if it’s above 100 F.)

Yes, you may have read those women’s magazine articles about how being physically intimate can help you shed pounds. However, a 120-pound woman burns only 57 calories during 15 minutes of sex. That’s less than half a Hostess Ho-Ho. The sweat could do nice things for your skin, but your waist will remain the same size.

Ever since you were nine years old and saw that topless Kate Moss Calvin Klein ad, you’ve had a hunch you were same-sex oriented. Unfortunately, the thought of sharing this with anyone scares you, so you get yourself a boyfriend. But you can’t stop thinking about that ad….

Empathy for a sad soul is one thing; holding an intimate pity party is quite another. Oh, and you know that saying, “no good deed goes unpunished?” It goes triple in this instance. Misery loves company—good luck getting him out of your apartment. 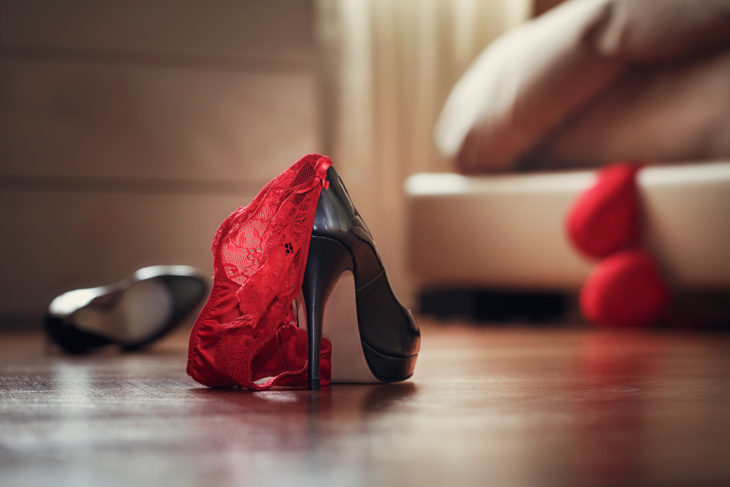 I’m not knocking or talking about the sex professionals out there—this is for the amateurs among us. Just because he bought you a lobster doesn’t mean you need to give up dessert. Catch my drift?

He’s famous, you want to be. Contrary to what you might’ve surmised from that old Pamela Des Barres book, “I’m With The Band: Confessions Of A Groupie,” fame is not transmissible through intimate contact. However, lots of other things are, so watch out.