First Time For Everything: The Gratifying One-Night Stand

As a single lady who has lived in a big city for years, and now moved to a new one, I’ve had my fare share of one-night stands. I’d never call myself someone who makes a romantic life out of having a lot of random sex. In fact, my heart stands more on the traditional side where I look for sex after the relationship connection, knowing I usually wind up hurt in casual flings and that I actually disdain the thought of adding another one-nighter to my “list.”

Knowing human nature, it seems inevitable that the slip-up is bound to happen several more times (I tally five now). For the most part, these one-nighters have never been calculated. They’ve always happened when I’m emotionally vulnerable, usually from a breakup. The guys I’ve usually met in bars, and I stereotypically end up taking them home due to vodka goggles. At the end of each, I’ve woken up with a pounding headache, slightly startled by the aroma of male B.O. in my room, eventually recalling, in an embarrassing flashback, what occurred a few hours earlier. Ack!! Why did you do that? Did you really, really need to get laid last night? Sudden memory: Me saying to my girlfriend, “It is imperative I get laid right now.” Oops. I’m guilt-ridden for days. And I now also have to wash my sheets. 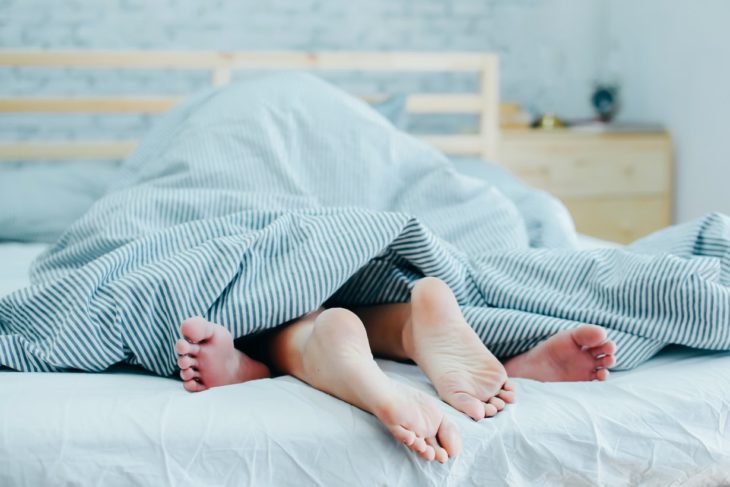 While I know I’ll never be one of those women who claims to be liberated by non-committal sex (do they even really exist?), I decided to look at things differently with a recent experience. A few nights ago, I was basically presented with the option. “You should meet my hot friend, Brad*,” a girlfriend in a different state told me. “He’ll be in your city for a few days.” Translation: “You can almost definitely have sex with nice dude if you want.” This, along with the facts that Brad lives halfway across the world, was in town for two days only, and knew I didn’t have a lot of friends in my new city, spelled perfect hookup. Not to mention that having a common pal greatly eliminated the chances of Brad being a psycho killer.

So when he did end up calling and asking to make plans a mere two hours before they would begin, I decided to run with the obvious. True, it had been a few months since my last hookup, but that wasn’t the motivation here. It’s not like I had been going around yelling, “I’m having a dry spell! I have to have sex right now.” But for the first time ever, I realized I had the opportunity to say to myself, “Do you want to consciously make the decision to do it tonight with a dude you’ll probably never see again?” Hmm …

Of course, that would all be dependent on Brad’s true attractiveness level (Facebook lies all the time) and inclination toward douchebaggery. Things were clear from the moment we met that he surpassed requirements and we’d end up seeing each other naked. As Brad and I wandered around looking for a place to get a drink, we talked about being two strangers in an unknown city, and dove right into usually off-limits first date topics of past relationships, even the recent ones.

When I took Brad home, I knew there was no pressure to go through with things, but that, clearly, if he was at a girl’s house at 1 a.m. “for a nightcap,” he was into sexytimes. Realizing I held the cards, I became bolder with my flirting, and when we finally did get into bed, I threw away my usual body conscious thoughts, even getting to a point where I could see what he saw and liked about me. Up until then, I had never once felt completely OK with my naked body in front of a guy.

I would have normally dreaded the morning, the part where you have to fake an excuse to get a boy to leave (“I have to be at, um, this place, at, like 9:30”). Instead, when we woke up, I told him I’d had a nice time and that he should probably go now. He did so politely.

Brad himself might have been the kind of guy who could provide that pleasant experience, and it would seem I had just gotten lucky. But from my end, there was no luck involved at all.

8 Rules For Kissing Off Your One-Night Stand

Woman Getting Married: Why I Won’t Be Getting Laid During The Holidays