My dad is gay.

It is usually after I have known you for a little while before I will say those words to you. Sometimes it’s our first long conversation, when people go through the whole “Where are you from; what do you do; where’d you grow up?” script that everyone in the world receives once they are old enough to attend any social events. And it’s after I say that that the real questions begin.

He’s silly and goofy and smart and honest. Sometimes he is tough and hard to please—there is no sound bite I can break him down into. He’s not “my gay dad” – he’s my dad, who also happens to be gay.

The questions are usually along the lines of “So how did that happen?” To know how it really happened is his story not mine, but the background is this: I have a mom, my parents were married when they were 21, they separated when I was three, and my dad met his partner when I was four. They just celebrated their 28th anniversary.

These days there are gay parents everywhere and sometimes I think it will be a lot easier for their kids to explain than it was for me. Saying “I have two moms” is fairly clear. My story is not as easy to explain. I have a mom and a dad. My dad has a male partner, who’s more like an uncle to me than a second dad – there were times when we absolutely didn’t get along, but it’s better now. It’s as if we have a peace treaty that was forged once I didn’t live with them anymore. 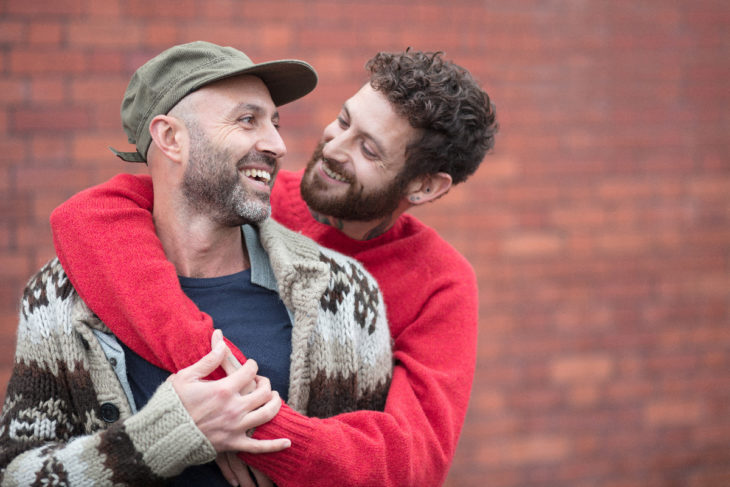 I was lucky in a lot of ways, but most of all I was lucky enough to grow up with three people who always made an effort to get along.  We had Christmas together every year until I was 12 years old.

For the most part there’s nothing different about my dad than anyone else’s. He taught me to ride a bike and to drive a car; and, like other fathers and daughters, that ended with me in tears. He does dorky dad things that make me laugh and, other times, make me roll my eyes. He’s silly and goofy and smart and honest. Sometimes he is tough and hard to please. Tthere is no sound bite I can break him down into. He’s not “my gay dad” – he’s my dad, who also happens to be gay.

There have been times when I want to jump to defend families with parents who happen to also be homosexuals. It’s so frustrating that they’re judged so harshly on one minimal fact when everyone is so much more than that. I don’t understand people who get up in the morning and grab their “GOD HATES FAGS” signs and stand on street corners all day. Seriously? Who are you? They make their signs so big so they have something to hide behind. I’ve had conversations with members of my extended family where they express that they love my dad even if they don’t agree with his “choices”. As if who you are is a choice. I feel sorry for these people. They will never know the goodness in anyone if all they can see is sexuality broken down into black and white, into male and female, into good and bad “choices.”

What I would like to say to those people filled with hate is that you do not know me. You don’t know or understand my family. But I would never stand on a street corner with a sign saying God hates you.

I would never judge who you are, your life, your family—I was raised to be better than that.

Everything You Need to Know About WoW Classic

Girl Talk: Dating A Guy With A Kid Sucks