Guy Talk: In Defense Of Dating Your Coworkers

Before I start here, I need to explain why the distinction between the type of “work” I’m talking about here is different from the typical kind of “job” drudgery lamented in endless Dilbert comics and annoying Facebook status updates. The type of workplace referenced here is the kind that serves as a funnel for your passions, not an obstacle between you and the weekend.

The work-to-live idea should by now (I hope) have been replaced by the live-to-work idea where you’re able to marry your passion to a day job that feels organic and parallel to your desire to create, shape, or direct the world around you. When you lock into a working environment that’s aligned with what drives you—be it writing, architecture, waste management, music, or retail—you’d be hard-pressed to find a better place to meet a mate.

It goes against traditional wisdom and hackneyed clichés—fishing from the company pond, #&@$% where you eat, dipping the pen in the company ink—but the truth is, it can be kind of awesome. And your coworker is probably better to date than that stranger you were going to meet in the bar after work anyway. Here, then, I present the following in defense of dating coworkers:

1. They’re probably really fascinating to you. If you have one of the above-described passion-based jobs, you’re there for a reason, presumably having chosen something that resembles a topic you spent four years studying in college and perhaps another few learning in grad school. You chose that particular company to work for: it was a chance to grow, something that challenged you or contained some nugget of fascinating duties that made it more appealing than slinging books at the local Barnes & Noble. Your coworkers are there for the same reasons.

The last time I dated a coworker, we were both local news reporters at a scrappy small-town paper. We’d spend the days on the phone slugging it out with obstinate local officials, stay late in the newsroom to meet deadlines, and then spend the evenings chugging cheap beer, swapping tidbits of information the public wasn’t privy to, and lamenting the sad state of local politics. At night we’d take out our frustrations by having mad post-deadline sex, stumbling out of the bed the next morning with a renewed smile to do it all again.

2. Lunch dates, and more time together. What is one of the main reasons otherwise healthy relationships crumble and deteriorate? The problem of not spending enough time together—which, to be sure, is a byproduct of a job where you care about more about the quality of your output than the hour on the clock. Dating a coworker means they “get” this in a way the stereotypical caricature of a woman at home tapping her foot while sitting with a rapidly cooling roast doesn’t. It also means finding little intimate moments to share during the day. Lunch dates on the patio outside the office, sneaking out for a coffee run in the afternoon, a quick peck on the lips when no one is looking or a makeout session in that hidden spot of the building no one else knows about. And when you say you’re stuck at the office late, that story is verified without suspicion.

3. It’s like high school—in a good way. Ah, high school romances, the “check this box if you like me”–style insecurity and note-passing, the “accidental” encounters in the hallway, the hushed whispers as gossip spreads from one end of the building to another. It doesn’t stop just because you’re getting a paycheck instead of grades, and it’s still just as juvenile. But, hell, it’s also kinda fun, and it certainly beats the fresh hell that is the world of online dating and attempted digital flirtation (speaking as an failed suitor in several online dating arenas) where overtures of potential affection are sent into the black hole of the Internet. Even if things go sour, you get the appeal of being actors in the drama that everyone else at work is watching with the intensity of a soap opera. The heightened sense of secrecy that usually surrounds workplace relationships makes you feel like Jay-Z and Beyonce.

With your coworkers, much like in high school, it’s easy to employ the services of an intermediary. Coworker X might know that I like her deskmate, Coworker Y, across the hall. She can handle the notes, flowers, secret Santas, and other wingperson-type duties, as well as passing on relevant bits of tantalizing gossip to help the courtship. I’d do it myself, but I don’t know her locker number and I have study hall that period anyway.

4. No risk of alienation by boring work talk. We’ve all been in the situation where you invite your date out and there happens to be a bunch of work people at the bar, and the conversation naturally devolves into the same old bull session about the problems of the office, the complications of whatever went down that day, or the way that one certain dude can’t seem to find a brand of tuna fish to eat that doesn’t smell like rejected Soviet-era rations. Then you look over to see your date glassy-eyed and dreary, stirring their drink idly or texting their own friends from work out of sheer boredom.

When you’re dating a coworker, you’re both in the same boat. Their problems are your problems, and vice versa. And maybe you’ll discover that bitching about work isn’t as much fun as unwinding with the person that you’ve been waiting all day to see outside the office. 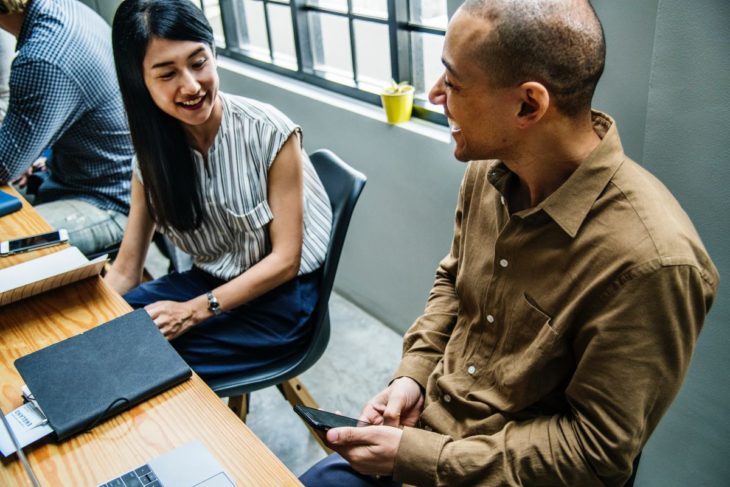 6. If things go bad, professionalism saves the day. All the advice columnists who tell you not to date your coworkers cite the possibility of a hostile work environment if things take a turn for the worse. In reality, though, workplace professionalism is an efficient mechanism to avoid awkward situations and delay bitter conversations until a scheduled appropriate time. If you are both serious about the work at hand, the dalliances of human love affairs have to take a backseat to whatever drove you to the job in the first place.

When the aforementioned coworker and I broke up, we still had to go to the newsroom the next morning and report the hell out of some major stories. This kind of professionalism instills a sort of respectful civility in the post-relationship sphere that you might not get if you two spent the whole day far apart, seething at each other and filling your head with an echo chamber of harmful “what is she doing right now?” relationship necrophilia.

This piece was originally published at The Good Men Project Magazine, an online publication which claims: “Unlike so many other men’s magazines, we don’t patronize or caricaturize our audience. We try to bring out the best in men, and we do that by producing content that challenges men to think deeply—and to talk about the things they don’t usually talk about.”

How to Enjoy a Slick and Comfy Trip to Africa