Handle This: Dating A Mama’s Boy

When your relationship is full of drama created by his mama, the road to romance can feel like a traffic jam – with her in the driver’s seat. Puzzled as to why when he’s around his mother, your man acts more like a boy? Below, Debra Mandel, Ph.D., author of “Dump That Chump: From Doormat to Diva in Only Nine Steps-A Guide to Getting Over Mr. Wrong”, answers this and some additional commonly-asked questions concerning men who aren’t yet ready to make someone other than mama number one in their lives.

Q: What causes a man to be a mama’s boy?

Dr. Mandel: Guys who have always been coddled and indulged by their moms often become “mama’s boys.” Moms who do this tend to be fairly needy (especially when it comes to male attention) and therefore seek to create a relationship in which someone will be very dependent upon her. As the son of this type of mother grows up, he often fears that his mom will fall apart if he so much as moves to the neighboring zip code. So, it becomes a mutually parasitic relationship; both mom and son are afraid to be independent of each other. In essence, your guy has become his mom’s pseudo-husband, and consciously or unconsciously, he likes the importance of this role. Of course, this makes it hard for him to commit to another woman – namely, you.

Q: What’s the difference between a man having a “healthy” attachment to his mother and an “unhealthy” one?

Dr. Mandel: While you might find it odd that he’s calling or even visiting his mother daily, the frequency of contact a guy has with his mom doesn’t determine how healthy or unhealthy his attachment is to her. What does, however, is the quality of the contact. If both mom and son have mutual respect for one another and have set good boundaries with each other (if he’s able to say “Thanks but no thanks for the new underwear you bought me, Ma. I am 34, you know…”, for example), their talking everyday may not be something worth your concern. On the other hand, while mom and son may not see or talk to one another very often, if he can’t make a decision in his life without her approval or validation, that’s a sign of a seriously unhealthy attachment.

Q: When evaluating the health of a guy’s relationship with his mom, what do you recommend a woman look for?

Dr. Mandel: A guy with a healthy relationship with his mother can say “no” to her, make choices and decisions on his own, have an intimate relationship with a woman without fearing his mom will be jealous or intrude in his relationship, and likes it when mom is busy and enjoying her own life with or without a spouse. If he still takes his laundry over to mom to have her do it, or has her cook weekly meals for him (and he doesn’t have the flu), run!

Q: What would you recommend a woman do if it seems her guy is the one with the issues – meaning, Mama actually seems quite normal?

A: If this is the case, odds are that during his childhood she created that unhealthy dependency between them, but when he reached adulthood, she was ready to let go, yet he wasn’t quite ready to leave the nest emotionally (and possibly even physically). Ultimately, he still expects mom to rescue him and take care of his every need, even though she’s not interested in doing so. If you’re dating a guy like this, I recommend you cut your losses fast unless he gets help or becomes proactive about growing up. Otherwise, he may never let go of mom, or worse yet, he’ll turn you into his mom and expect the same from you.

Q: What if mama is the one who’s not yet ready to cut the cord? Granted, he’s not grabbing any scissors, but what if she’s the driving force?

A: When this is the case, it’s better for you to gently coax him to start setting some boundaries with mom. For instance, say to him, “How about if we join her for Chinese one Sunday per month as opposed to every one?” Regardless of how many boundary-setting suggestions you offer, he has to be willing to give her the message. Otherwise, it’s probably not going to change much and you’ll just grow to resent her even more. 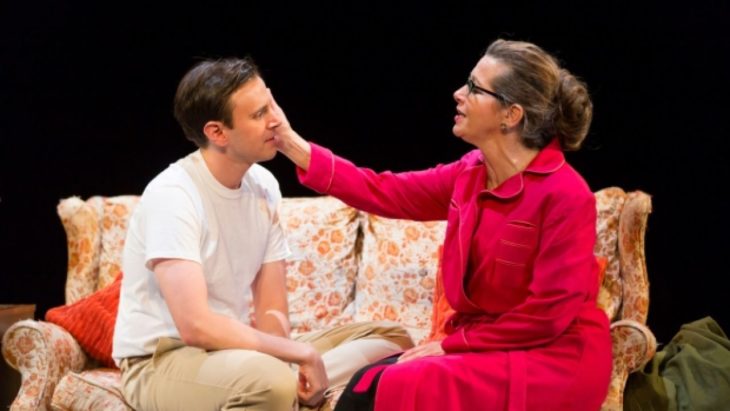 Q:  Is it ever wise to confront his mother directly?

A: If you and he are just beginning to develop a relationship, I wouldn’t advise taking on his mother. She’d probably end up creating a wedge in your relationship and then he’d likely feel forced to choose between the two of you. And because you’re the new girl in town…well, I don’t think I have to tell you whom he’d choose! If you’ve been together for a while and you’re serious about one another, however, if she’s intrusive or disrespectful of you or your relationship, it might be time to invite her to lunch for a little chat. I’d keep it rather casual, so as to not be threatening. An opening might be, “I get the sense that it’s hard for you to let your son really become his own person. I wish you wouldn’t feel like you’re losing him to me, but that you’re just developing a new relationship with him that also includes me.” A warning: don’t do this without your boyfriend’s support. Otherwise, mom will likely go back to him and read him the riot act for allowing you to tell her how to perform her motherly duties, which only give her reason to paint you out as the bad gal.

Q: Can a “mama’s boy” ever be rehabilitated? At what time do you think a woman dating a mama’s boy should give up the chance of this ever happening?

A: A mama’s boy can most definitely be rehabilitated, but only if he’s willing to acknowledge that his relationship with his mom is unhealthy and needs to be restructured. If you’ve tried multiple approaches to help him see the light, yet he continues to tell you to let it go or not butt in, then it’s time to end it. In general, the younger your guy, the more slack you can cut him when it comes to cutting the cord. As long as he’s at least taking baby steps as he gets older, the less time and energy you should spend worrying if it will ever happen – it will, it just may take a little time. Try to approach it with empathy and a sense of humor – exhibiting these qualities tends to be the most effective when you want a man to change his behavior. Being angry, demanding, pushy, aggressive or judgmental will probably send him right back into the arms of someone who’s never that way with him, and you know just who that is!

4 Most Common Ear, Nose and Throat Problems You Must Take Seriously