I Have Crohn’s Disease

I’ll never forget the vacation my family took when I was 7 years old. It was the summer before I entered second grade and we drove up to Vermont for a week of hiking, biking and staying up past our bedtimes.

But the trip wasn’t so much fun for me. I had no energy to hike and was tired all the time. At the end of the week, during a stop at Attitash Mountain in New Hampshire, I began having such intense, mind-numbing stomach aches that I couldn’t even stand up. I threw up all over the scenic Cog Railway and my parents immediately got me into the car and took me to the hospital. I was running a fever and my weight had dropped to 37 pounds from my usual 50.

At the hospital, I saw tons of doctors, including a gastroenterologist who, after a series of tests involving me drinking way too much Barium “cocktail,” diagnosed me with Crohn’s Disease. My family had no idea what my having this disease meant—no one we knew had it or had ever mentioned it.

Because Crohn’s Disease, an autoimmune disorder, is characterized by severe stomach pain, diarrhea (often bloody diarrhea—I told you it was abnormal), anemia and the inability to properly digest food, no one—especially not 20-something females trying to make it in the professional world—wants to talk about it. During a flare-up, I can be perfectly fine one minute and then, out of nowhere, my stomach will cramp up and I need to find a bathroom immediately. After I go to the bathroom, I feel better for a few minutes, but the pain and urgency always come back. 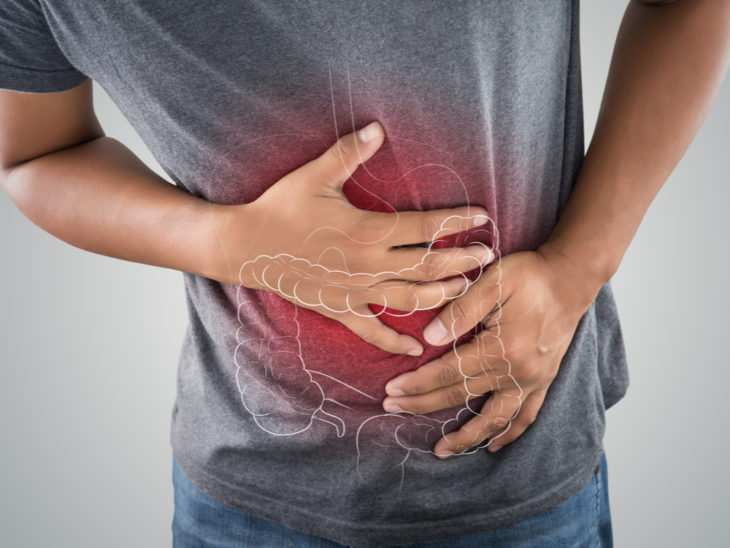 For nearly 10 years, I experienced yearly flare-ups of the disease and had to be put on steroids. A high dosage of the drug worked, but it had side effects, including “moon face.” I hated going to school with puffy chipmunk cheeks. But what was worse, running out of class to go to the bathroom or putting up with a pudgy face for a few months?

Growing up, doctors knew so little about Crohn’s that I was basically an experiment, a guinea pig on which they tested out new medicines to find something that would help me live a comfortable life. Prednisone, Methotrexate, Lialda, the 5-ASA drugs … I’ve swallowed ’em all. Still, on every long car ride, trip to an amusement park or week at dance camp, the first thing I’d always do was check where the closest bathroom was in case I needed to make a run for it.

Though doctors still don’t know a lot about the disease, one thing they tell me is the flare-ups could be stress-related. I had a bad bout when I went first went away to college. There I was, a freshman at a university three hours from home, knowing no one, and already having to miss classes because I was sick. It’s not easy making friends when you can’t go to parties or make it through a club meeting.

My next bad flare-up was two years later, as I was headed to Australia to study abroad for four months. I must’ve crawled over my poor seatmates on the flight 20 times to go to the bathroom. Once I got to Australia, most of my time was spent in my room because I was uncomfortable leaving the comfort of my own bathroom. I was eventually hospitalized and put on a handful of drugs, including steroids, which took about a month to kick in. Though it was the trip of a lifetime (once I got better, I did something I’d always wanted to do—skydiving), I rarely look at my photos from those four months because I hardly recognize myself.

Since then, I’ve had two more bad flare-ups: once just as I was starting my first job out of college in NYC and another just a few months ago, right before my 25th birthday. Now, after years of pain and embarrassment—no one wants to run to the bathroom in the middle of a first date or during a staff meeting!—my doctors and I have found a treatment that works for me. Every eight weeks I receive a three-hour IV infusion of a drug called Remicade. It keeps me in remission. 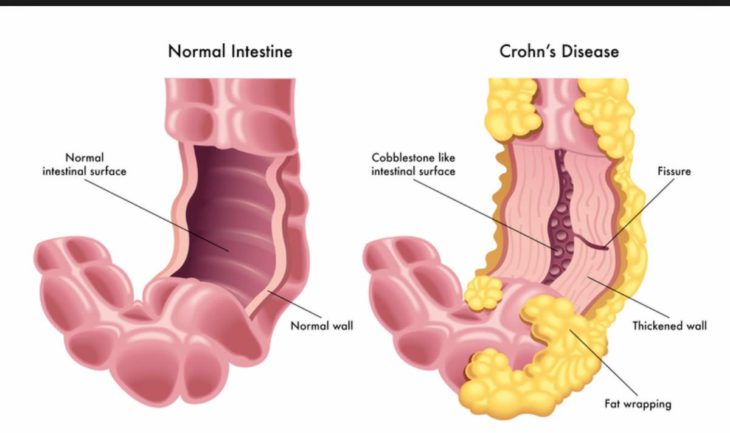 One of the most difficult aspects of having Crohn’s Disease is finding a way to tell people about it. Of course my family knows and has been my biggest support system. My brother, who is 19 months older than I am, was diagnosed with the disease not long after I was. Doctors have found that it is common in siblings, though it doesn’t carry from parents to their children—go figure. He receives his Remicade infusions the same week I do. And my dad, who is notorious for being “the guy who always passes out,” sat with me during my endoscopy when I was first diagnosed, and again during my first Remicade treatment at Dartmouth Hospital. Both times he had to leave the room before he fainted—but he always came back to hold my hand. In fact, the first time I was hospitalized, he sat outside the bathroom in my hospital room and held my hand while I did my business and cried.

I’ve been lucky because I have amazing, understanding people in my life. I’ve had several boyfriends over the years, and I didn’t scare any of them away with my graphic health problems. One particularly nice boyfriend even donated his car to the Crohn’s & Colitis Foundation of America.

My current boyfriend has been the best about it. One day, not too long after moving to NYC, I saw an ad in the newspaper for Team Challenge, a half-marathon training program that raises money and awareness for the Crohn’s & Colitis Foundation. I had never been a runner, but this seemed like the perfect challenge for me: learn to run and raise money for an important cause.

We met a week after I completed my first half-marathon with Team Challenge. I was so hyped up that I was already planning to run a second race later that year in Las Vegas for the same cause. In an effort to impress me (it worked!), he signed up for the race as well (he was not a runner), and pledged to raise $3,700 for CCFA. Only after committing to raise money and run 13.1 miles did he ask me why I’d picked CCFA as my charity of choice. I told him that I have Crohn’s Disease, simply saying I regularly experience “really bad stomach problems.” Google helped him navigate the remaining details.

He’s not the only one who jumped on board. My current roommate raised money and ran with me in Napa, and one of my college roommates joined me in Las Vegas, where she was one of our top fundraisers! To date, I’ve raised more than $6,000 for CCFA and I’ve met some incredible people through Team Challenge. 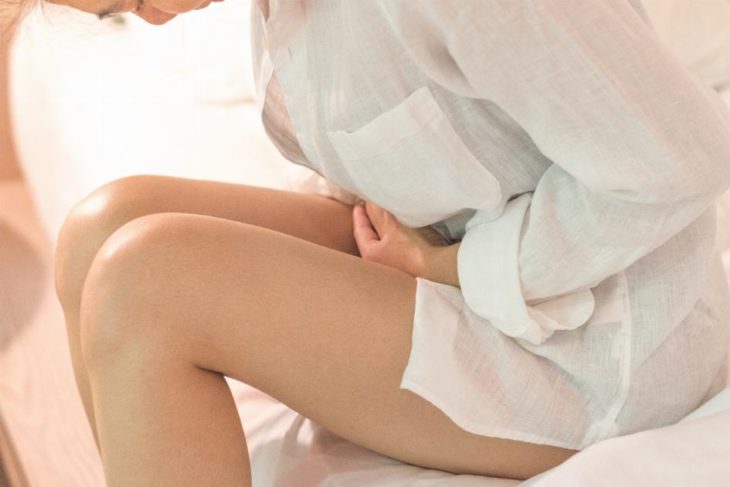 One big emotional hurdle I faced was telling my employer about the disease. When I started my job, my boss was a guy in his mid-20s. I had to use a few sick days during a flare-up and told myself to suck it up and tell him what I was dealing with. Turns out, he’d had a girlfriend with Crohn’s and knew all about it. Then, when I was fundraising for my first race, I emailed a bunch of coworkers letting them know about my goal and the cause. Some were shocked to learn that I have a chronic disease; one coworker confessed that she has Colitis (a disease with similar symptoms) and each and every one of them donated, helping me raise more than $4,600.

Despite my recent flare-up, I feel healthier than I ever have. If a flare-up is on the horizon, I recognize the symptoms, so my doctors and I are quick to treat it. I’ve got my dream job, a great apartment in the city and an unbeatable life.

To be frank, Crohn’s Disease sucks. It’s unattractive and can be a major inconvenience. But it’s also introduced me to people I never would have met otherwise. I’m so grateful to the people—smart doctors, my incredible family, understanding roommates, fellow Team Challengers, and a boyfriend who invested in running shoes—who have made having this disease that much easier on me.

My advice to other young women battling Crohn’s or Colitis: There’s no cure for these diseases, so embrace them. Learn what you can and can’t eat (fried chicken and I will never be friends), find a doctor you respect, and surround yourself with people you’re comfortable around. And here’s hoping that a cure will be discovered during our lifetime!

Oh No, Your Facebook Profile Reveals Clues To Your Mental Health

The Coolest Hoodies to Have in Your Wardrobe