Mind Of Man: Why Men Cheat (The Abbreviated Version)

So long as love rides shotgun in your life, nothing can ever truly be that bad. It is the singular prize that trumps all others, the reward that sweetens every success. Truly, it is the hot fudge on the ice cream scoops of personal achievement. Now, excuse me while I puke a little in my mouth. Actually, I’m going to shotgun a cheap beer and play some Grand Theft Auto 4 to make amends for such an unforgivably cheeseball observation. More on love and rewards and, ZOMG, trust, after the jump…. Plus, a fable!

Another reason men run around behind the backs of their doting, self-sacrificing, noble girlfriends and wives—you don’t adore us enough. When Spartan warriors returned home from victorious campaigns, do you think their women greeted them with eye-rolls and shrugs? Nay, she-dudes! They were venerated supremely, celebrated for days upon days!

Many ladies want to know why it is men cheat. And here’s what you want to hear, straight from the talk-hole of the testosterone enabled: men cheat because we are faithless, miserable dogs. We are backstabbing, silver tongued two-faces who stalk any smooth pair of getaway sticks in a short black cocktail dress that happens to saunter into our lusty field of vision. Men are horny wolves in fluffy sheep’s clothing who delight in looking into your eyes and lying. Breaking hearts is our middle name. Why, at any given moment, while you’re gabbing to your girlfriends about flowers purchased, omelette’s made, sweet words whispered, we’re picturing the nearest woman under the age of 25 in a sheer bikini, riding a mechanical bull. 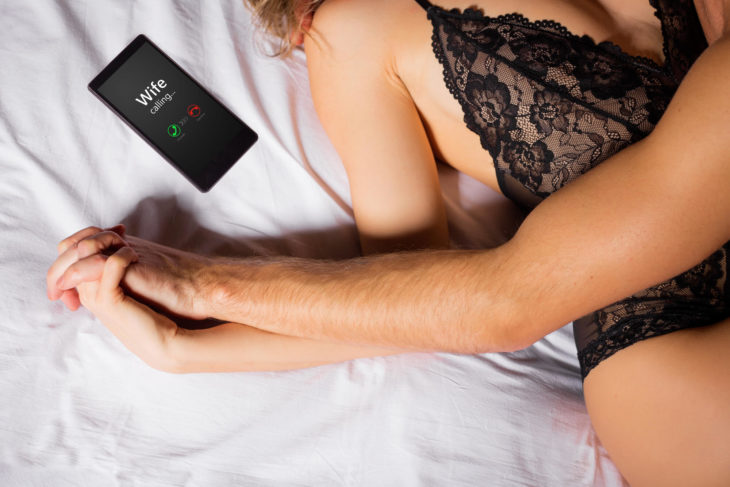 We are just hopelessly addicted to that “new car smell.” We love to make you miserable in our pursuit of total hotness, your fickle happiness be damned. By the way, my name is John. Have you ever read “Atlas Shrugged”?

And that’s just part of it. If you want to blame someone for our cheating ways, blame evolution! We are hardwired to hunt, and to share our wicked cool genetic code with a world that demands that we do! The universe conspires to compel us to pursue that which retreats. See, we cheat because we’re cavemen, and our half-gorilla brains demand we spread as much of our seed over as much fertile ground as possible to make sure that our little caveboys have the chance to grow up and do likewise. And we do this quickly, mind you, because you never know when a woolly mammoth will shish-kabob us on one of their mighty tusks. It’s not our fault. It’s biology, genetics, science for the love of Zeus.

How can you question science? Without it, the curling iron would never have been invented!

Here’s another reason men run around behind the backs of their doting, self-sacrificing, noble girlfriends and wives—you don’t adore us enough. When Spartan warriors returned home from victorious campaigns, do you think their women greeted them with eye-rolls and shrugs? Nay, she-dudes! They were venerated supremely, celebrated for days upon days! Love was made to them, olives were pitted and fed to them, their wives could not get enough of their dangerous tales of adventure and carnage! Tales told over and over and over again. And, at the end of each of these nights, as the mighty victors, now satiated and spent, drifted off to sleep, their ladyfolk would purr into their ears, “OMG, YOU ARE TOTES AWESOME.”

How could I forget this other important reason why men cheat—we’re addicted to sex! It’s not our fault we drool for hours over porn while you sleep. It’s a diagnosable affliction, and while many of us probably don’t really need to see a shrink to legitimately diagnose it, or to even go to rehab, you have to understand that it’s beyond our control. We can’t help ourselves. Pity the booty junkie. And don’t take our word for it – actual relationship experts on television confirm that some, if not most, men are hooked on sleeping with as many women as they can. This in no way enables us to justify bad behavior and to escape responsibility for our actions. This is just a true fact,  that men can become addicted to getting whatever it is they want without consequence.

Surely, as the more emotionally developed and sensitive gender, you can’t negatively judge someone wrestling with such a malady. That would be cruel.

Plenty of blame to go around; it would be unfair to savage one gender so the other can enjoy the dismal pleasures of pointless victimization. But there is a reason people, men and women, cheat.

And here’s the fable part.

A dog was carrying a bone over a bridge. Looking down at the water under the bridge, the dog saw his reflection, which looked to the dog to be a bigger dog, carrying a bigger bone. Wanting the bigger bone he saw in the water, the dog barked and dropped his bone into the river. Stupid dog loses his bone.

We cheat because we’re tempted to risk what we have for the promise of something that isn’t, probably never was, and definitely won’t last.

So … everyone is capable of cheating. We are our very own villain and that is a true fact. Makes us human, I suppose. The choice.

Ah well. Sucks. But it’s a risk we all have to take, trusting the other person even though they could cheat. But without risk, there is no reward.

Women in Blogging: Why WordPress Is the Best Platform for Them