Interest in Shelly’s whereabouts got actual media attention after actress Leah Remini left the Church in 2013, and filed a missing persons report. Remini says that when she attended Tom Cruise and Katie Holmes’ wedding in Italy in 2006, she was surprised to see best man, David Miscavige, without the company of his wife, and asked about her whereabouts. That inquiry, as well as a “Knowledge Report” she filed with the Church, led to Remini being stuck with three months worth of “sec checking” — basically, hardcore interrogations about the various evils she had committed — and the “Truth Rundown,” “an Orwellian practice of thought reform,” as Ortega puts it.

But Shelly’s disappearance stayed at the forefront of Remini’s mind, and she continued to search for her, sending gifts and letters to her attention at possible Church locations, only to have them returned. Remini allegedly even threatened to go to the FBI if the Church didn’t produce Shelly. After she finally had enough and left the Church, Remini filed a missing persons report, but it was thrown out. The Church maintains that Shelly Miscavige is not missing and is happily working for the Church, though, again, she has not been seen or heard from, save for that one appearance at her father’s funeral, in 8-9 years. 2. The Heartbreaking Story Of Uwe Stuckenbrock

Speaking of David Miscavige, he’s hardly been lonely since his wife’s banishment to CST. Laurisse Henley-Smith (formerly Stuckenbrock) was DM’s “Communicator” and became his constant companion after Shelly’s disappearance, even attending Cruise and Holmes’ wedding with him. There are reports of the two of them retiring to a bedroom aboard Tom Cruise’s private jet, and exchanging affectionate body language at various events (the pair is pictured above). That Laurisse was married to Uwe Stuckenbrock, who was once head of security at Gold Base, proved to be of no particular issue to DM, given that he managed to get rid of his own wife; according to multiple former members, DM allegedly either ordered or “encouraged” Laurisse to divorce Uwe, from whom she was already estranged after he was diagnosed with Multiple Sclerosis in 1996.

Scientology doctrine views medical conditions like Stuckenbrock’s MS to be “out ethics,” the result of some “crime” he had committed in this or a prior life, that could only be treated through intense auditing, and not actual, you know medical attention. As both Uwe and Laurisse were Sea Org members, and Uwe’s MS made him unfit to continue serving in the Sea Org, Laurisse ended their marriage following his diagnosis (though they didn’t officially divorce until a few years later) so she could continue to serve in the Sea Org at Miscavige’s side. (Sea Org members are only allowed to be married to other Sea Org members, and there are many cases of spouses being forced to divorce by the Church.) Sometime in 2001, after allegedly trying to leave the Church but being “wooed” back in by Laurisse, Stuckenbrock was sent to the Rehabilitation Project Force (RPF) first in Happy Valley, California, and then at PAC Base in Hollywood, California.

The RPF is essentially a labor camp where those members of the Sea Org who have fallen out of favor are sent to work under inhumane conditions to prove their loyalty to the Church, often for years at a time. On October 7, 2007, 11 years after being diagnosed with MS, six years of which were spent working on the RPF while his condition deteriorated, Uwe Stuckenbrock died. You can read his brother Markus’s account of his brother’s life and death here. Meanwhile, his ex-wife, Laurisse Henley-Smith Stuckenbrock, is still a member of the Sea Org and allegedly continues to work closely with David Miscavige.

3. The Mysterious Death Of Stacy Moxon

On June 25, 2000, Stacy Moxon — married name Stacy Meyer — died at Scientology’s Gold Base (also the Church’s International headquarters) in Riverside County, CA. The coroner’s report said that the 20-year-old had somehow “descended” into a “deep underground electric vault” where she “came in contact with a 7200-volt wire connecting two transformers and was instantly electrocuted.” But why was Moxon in the vault — an incredibly dangerous place — in the first place? The Church wrote her death off as an accident, saying the “animal lover” had chased a squirrel down into the vault and had slipped. And while the California division of the Occupational Safety and Health Administration (OSHA) had cited Gold Base for improper wiring precautions near that very vault, their investigation into her death, based on interviews with Scientologists working at the base, concluded the two were unrelated. But many people who knew Moxon and her family, not to mention the layout and working conditions at Int. Base, question the Church’s story, saying Moxon was actually being held a prisoner for two months at the base —- and that it is far more likely that Moxon either committed suicide or had been sent down to work in the vault as “punishment.” Both scenarios are exactly the type of thing the Church would attempt to cover up, as they’d result in terrible PR for the church, especially given that Stacy Moxen was the only daughter of Kendrick Moxon (below), a Scientology official and attorney for the Church. 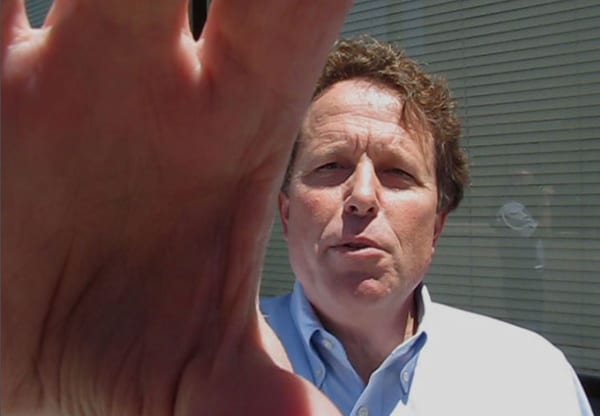 Given that the Church purports to make “the able more able,” suicide, especially by a high ranking Church official’s daughter, would indicate that maybe LRH’s tech doesn’t work so well after all. Though there are many known cases of suicide by Scientologists, the Church reportedly goes above and beyond to cover up those deaths as “accidents,” and there are many who suspect such was the case with Stacy’s death, and that she even left a suicide note that was destroyed by the Church.

The other scenario presented by ex-Scientologists is that Moxon’s father had fallen out of favor with Church leader David Miscavige for some reason or another, and DM took it out on Stacy by downgrading her to a “lower condition” and sending her to do more dangerous work on the base. If Stacy had been sent down into the vault as punishment, and had been electrocuted while down there, that certainly is something the Church would not want outside investigators to find out, as it could blow the lid off their entire operation and the incredibly dangerous and inhumane working and living conditions of those who are held there, many against their will. Keep in mind, Int. Base is also where “The Hole” is located, though the Church denies that such a place exists. For investigators to come in and turn the place inside out, well, that would be a disaster and one that the Church would do anything to prevent.

These scenarios are of course speculation, but given what we know about what the Church has done to guard the truth behind several members’ deaths, and how bizarre Stacy’s death was, they don’t seem the slightest bit implausible.

4. The Missing President of Scientology

Did you know that the Church of Scientology has a president named Heber Jentzsch (pictured above with John Travolta) and that he has barely been seen since 2004? True story! According to Mike Rinder, he has been in The Hole–or, you know, Scientology jail–since that time. He was once allowed to speak to his brother David once in 2009, who reported that Heber had told him that he had wanted to get out of the church but didn’t know how. He was allowed to see his son Alexander for a few hours in 2010, after an exposé his ex-wife Karen De la Carriere wrote about his incarceration on Marty Rathbun’s blog received a lot of attention.

According to De la Carriere, David Miscavige had ordered Jentzsch to divorce her in 1989, though she stayed with the church until 2010 and was a fairly high-ranking auditor, having trained with LRH himself. She has since, naturally, been declared a “Suppressive Person.” 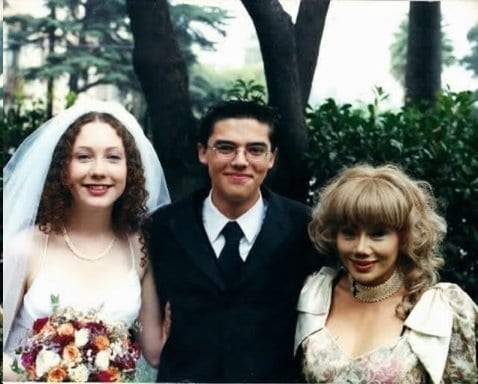 Alexander (picture above with his mother and his wife) died in 2012, after having taken painkillers to deal with a bout of pneumonia rather than antibiotics. De la Carriere blames the death of her son on Scientology practices such as using “touch assists” rather than traditional medicine. 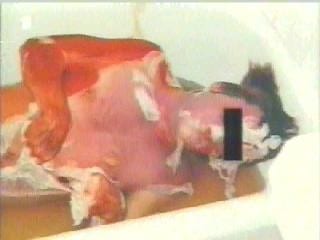 The Fort Harrison Hotel in Clearwater, Florida is the flagship building of the CoS’s Flag Land Base . It is also the site of a number of incredibly suspicious deaths. The most notable of which is that of Lisa McPherson, who died there in 1995 after having been held there for seventeen days.

McPherson had been placed there after having had a psychotic episode following a minor car accident, involving taking her clothes off in front of paramedics. It had been recommended that she stay at the hospital for observation, but checked herself out and was brought to the Fort Harrison Hotel for what Scientologists call an “Introspection Rundown.”  It was her second time having undergone one of these. As you may know, the CoS is extremely opposed to psychiatry, and so members experiencing severe mental illness are unlikely to get the help they need.

She died after 17 days. According to the coroner, McPherson died of a pulmonary thromboembolism caused by “dehydration and bedrest,” and that she was covered in bruises and cockroach bites. Her death was deemed accidental, but McPherson’s parents sued the church for wrongful death. The claim was later settled out of court, but now all Scientologists undergoing “Introspection Rundowns” must sign an agreement saying they or their families will not sue the church if something horrible happens to them.

McPherson wasn’t the only one who died there either. In 1980, Scientologist Josephus Havenith was found dead in the Fort Harrison Hotel, in a bathtub which was believed to be filled with water so hot it burned his skin off (pictured gruesomely above). Despite the fact that his head was not submerged in the tub, the official cause of death was “drowning.” In 1988, a Scientologist named Heribert Pfaff died there after refusing his seizure medication in favor of a vitamin program. An article published in 1997 claimed that there had been over 160 emergency police calls that year to the hotel, but that police were denied entry by scientology officials.

In addition to these deaths, there have been a number of Scientology-related deaths outside of Fort Harrison, including the extremely suspicious suicide of Susan Meister, who in 1971 was found dead on a Sea Org vessel, somehow having shot herself in the center of her forehead with a long barrelled revolver. Her parents maintain she was murdered, and there is definitely a pile of evidence to suggest that, including LRH and the Church’s suspicious behavior after the fact. There have also been myriad suicides (and some murders) attributed to harassment by the church, excommunication, and their policy against seeking psychological help.

“Going Clear” quickly touches on Hubbard’s friendship with Jack Parsons, a follower of Alistair Crowley through whom he met his first wife Sara Northrup Hollister, who was also a high ranking member in the Ordo Templi Orientis group started by Crowley. I did not previously know anything about this, and holy crap, I must know more. I want to know more about her, and about how one person can end up involved in two weird ass religious groups, and also how, if at all, how LRH’s experiences Ordo Templi Orientis group may have influenced the development of Scientology.

Given the fact that Hubbard went on to start his own religion, it would be very interesting to see more of what his previous experiences with religion were. Hell, after reading the Wikipedia page on Sara Northrup Hollister, I would be interested in just seeing an entire documentary about her.
Original by Amelia McDonell-Parry & Robyn Pennacchia
cultsdavid miscavigegoing clearreligionreligious cultsscientologyshelly miscavigetom cruise