Like many daydreamers, I often think about time periods other than the one I’m currently living in that I would most likely enjoy. I usually settle on the roaring ’20s (it’s easy to get caught up in how cute everyone would look with flapper dresses and bobbed hair). Then I remember, of course, what the ’20s were actually like. Women had only recently secured the right to vote, abortion was illegal, penicillin and birth control were very new, and employment opportunities were still divided into men- and women-only. (Guess who had the less attractive options?)

This little game is just a daydream. Yet it ends up always serving as a reminder that I’m fortunate to be a woman the 21st century. And that’s a reminder I’m ashamed to admit, as a feminist, that I need somewhat often. There are times when being a woman even in 2014 feels disappointing — things should be better, things should have changed more. I’m privileged as an educated white, middle-class woman that these things are as few as they are. But one of the very biggest areas that needs changing is women writing about sex.

If you are a woman who writes about sexuality, like I am, it is tempting to look at published writers like Erica Jong, Daphne Merkin, Anais Nin, or heck, even E.L. James (author of the 50 Shades books) and feel esprit de corps. You could also look at some of peers in writing online about sexuality, like Rachel Kramer Bussel and Feminista Jones. And I do appreciate and enjoy the writing done by all these women on some level. (Apologies to anyone who is offended to the lumped in with the 50 Shades lady.) But for every Rachel or Feminista, there are literally a hundred other women who might want to write about sex but simply are not willing. From what I can tell by anecdotally discussing this matter with woman after woman after woman over the years, the fear of social repercussions is too great.

I will be honest: as a woman who does experience social repercussions for writing about sexuality (some examples of which I’ll elucidate below), it’s hard sometimes to feel enthusiastically supportive of the choice other women have made not to write about sexuality. It’s difficult sometimes not to focus on how their decision allows them to reap the advantages that other women and I have forgone by — perhaps bravely, perhaps stupidly — taking these risks. I can understand how their reasons not to write openly about sexuality are fostered and held up by a patriarchal society; I can also understand that focusing solely on how women operate in that patriarchy is misguided. A lot of these reasons have to do with stigmatization, scorn, harassment and fear of violence — all ways known to historically control women, especially women with a lot more to lose than a privileged woman like I have. Still, when you are the one experiencing more of the repercussions (and feeling like you are doing so for the benefit of the group), it can be a hard pill to swallow.

These are just some of the reasons I know that more women don’t write about sex. I understand, intimately, all of the reasons. And I wish — a pie in the sky wish — that all of these reasons weren’t so.

3. A woman who writes about sex is “trying too hard” and “looking for attention.” Despite the fact that all women are told in more ways than one that being considered fuckable by heterosexual men is the most important thing, a woman actually acknowledging that she is fuckable — and likes it! — is somehow inappropriate. And if you are a writer on the Internet, there will quickly be screaming about how YOU JUST WANT PAGEVIEWS, which, apparently, is the only valid/good reason for a woman to write about sex. You will also be accused of being too desperate for straight male attention (which you’re obviously supposed to want, but not supposed to admit you want). Patriarchy rewards women for keeping silent, passive and in the background about our sexuality.

4. Sex writing can feel like an invasion of “privacy.”  Sexuality is largely a “private” realm in most of our lives, especially when it pertains to past and current partners. Yet ”privacy” is a word that changes its meaning person-to-person. Some people think nothing of posting on Facebook a picture of their toddler on the potty (poop included), but think it is “private” information that they gave a blowjob last night. Clearly our feelings about privacy are varying and complicated and have a lot to do with religious upbringing, race, class, health, past experiences with violence and abuse, and a myriad of other reasons. Yet it’s hard not to feel like a desire for privacy isn’t also a self-imposed silence so as not to be accused of being a slut. Or a desire to provide cover to alleged abusers, in more extreme cases. Single women who write or have written about sex, know it also scares off potential partners. Additionally, some people can’t handle knowing they might be written about. (Of course, with the right person, this all won’t matter.) Patriarchy values changing notions of “privacy” over honesty and candor.

5. A woman who writes about sex “invites” creepy, pushy, potentially dangerous unwanted male attention (which she should have known better than to elicit in the first place by writing about sex). There are more creeps, losers and stalkers on the Internet than you ever thought possible. Like a fly to rotten fruit, they seek out women who write about sex and latch on. It’s the woman’s fault, obviously, for attracting their attention in the first place. Last year for about six months straight, I received sexually explicit emails from a man who found my writing online. I had responded to his first, non-sexually explicit email. All his subsequent emails were so gross and strange that my friends and I laughed at them — but still, it creeped me out that he thought it was acceptable to write me unsolicited dirty emails. He sent me these emails for six months and I ignored all of them. When he announced his intention to come to New York City to see me, I got scared. When Amelia, my boss, emailed  the man and told him to leave me alone, this stranger accused me of liking the unsolicited, sexually explicit emails because I never asked him to stop and also said I should have expected them for writing about sex in the first place. And it’s not just me: I’ve had a coworker receive an unsolicited dick pic from a guy who read her work online. Yet our experiences are nothing compared to what other online writers like Amanda Hess (she of the famous Pacific-Standard essay “Why Women Aren’t Welcome On The Internet”) and Lena Chen (Sex And The Ivy blogger) have gone through. This is, of course, tied to women being perceived as “looking for attention.” As Slate’s Double X blogger Amanda Marcotte recently wrote, “‘looking for attention’ seems to be the catch-all excuse to justify any level of … harassment.” Quite understandably, other women don’t want to experience even one-hundredth of this crap.

6. Women don’t want our family members to see us (“daddy’s little girl!” “the baby of the family!”) as sexual. One of the explanations The Atlantic writer Clare Dederer gave in an essay about why it is difficult to write about her sexual experiences was that she cannot stop thinking about her mother’s judgment. Dederer wrote, “To be honest, my mother, still very much alive, assumes a ghostly, accusatory form and haunts my desk whenever I start to describe, say, giving a blow job to that creepy hippie Malcolm in the patchouli-smelling van in 1984.” Unless your mother’s name is Dr. Ruth, all of us can empathize with this on some level. I’m personally of the opinion that family members shouldn’t read anything they don’t want to know. Then again, I’m also someone who has had to have uncomfortable conversations with my mom about sex writing I’ve done. Patriarchy makes us worry about how our even our most intimate and close loved ones will judge us as sexual women.

7. We don’t want our current or future children to see us this way. Everything can live forever on the Internet in this day and age. Even if you don’t particularly care about being slut-shamed by your current/future children, some women are uncomfortable that their kids (or perhaps moreso, their kids’ friends and bullies) may be able to read about their sex lives. Yet it’s different for fathers. There is a stark sexual double standard for dads and moms when it comes to sex that taps into the virgin/whore dichotomy. Plenty of fathers think nothing of bragging about how much “tail” they got back in the day, while mothers are expected to be more innocent, less experienced and therefore more maternal. Patriarchy doesn’t see mothers as sexual beings. 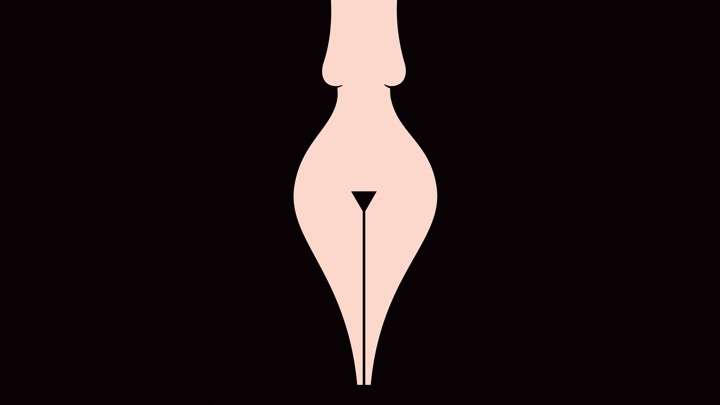 8. Women who write openly about sex could be prevented from getting future jobs. Writing about sexuality as a woman means you’re taken less seriously than if you write about Podunksville budget hearings. That’s just a fact. (This doesn’t just go for sex writers with presidential aspirations; it goes for any woman who is perceived as “too sexual.” Just recently, emails from Wisconsin Governor Scott Walker revealed he had a woman fired from a Milwaukee medical center because she had modeled thongs in the past.) One hopes that slut-shaming in this way cannot last for too many generations. As TV host Krystal Ball said in a statement after she ended a Congressional campaign, following the release of pictures of her in goofy-sexual situations from the opposition, “[Slut-shaming is] part of this whole idea that female sexuality and serious work are incompatible. But I realized that photos like the ones of me, and ones much racier, would end up coming into the public sphere when women of my generation run for office. And I knew that there could be no other answer to the question than this: Society has to accept that women of my generation have sexual lives that are going to leak into the public sphere. Sooner or later, this is a reality that has to be faced, or many young women in my generation will not be able to run for office.” Patriarchy means there is a stigma attached to this kind of writing still that can impede your ability to get hired for jobs (the many women I know who refuse to write about sex confirm that there’s a very real fear of it).

What does it mean that women hold back from writing about sexuality? To me, it feels as if there is less authenticity in how we write about — or, essentially, communicate about — ourselves. Women’s sexuality affects every area of our lives from politics to relationships to health. Because we are policed like this, and because we police ourselves like this, our views of the world are skewed and continue to be skewed.

Britney Spears-Story About Her Difficult Life