A Love Letter To My Hot Yoga Teacher

You are the hottest yoga teacher I’ve ever had. And that’s saying a lot because I’ve been practicing for 16 years now. Your body, your face, your demeanor … all extremely HOT. But here’s the weird thing: I am not physically attracted to you in the least. Not at all. I find the things you do and say during class absolutely ridiculous. But yet, I adore you. It’s weird and complicated. I think I have a platonic crush on you. Let me explain. I’m kind of in awe of you. Like a unicorn, it’s hard to believe that you really exist.

You’re like a character from a rom-com about yoga. Maybe Adrian Grenier or Hamish Linklater (even though you are better looking than both of them) would play you. In the casting breakdown, your character would be described as a “sensitive, 30-something spiritual seeker.” In the movie, you’d fall in love with a Greta Gerwig type. She’d be a yogi/doula who’d been living abroad in Costa Rica. She’d wear a lot of hand-knit sweaters and her hair in braids. She would come to one of your yoga classes, wearing all Lululemon, but making it look easy and casual, and be able to do Peacock pose without a spot. And that’s when you would fall madly in love with her. In the end you guys would move to Portland and open your own yoga studio/birthing center. But first, you’d break up because you’d be worried that losing yourself in another person would interfere with your spiritual dharma. Eventually you’d come around. But first, a three-week trip to India to sort stuff out! 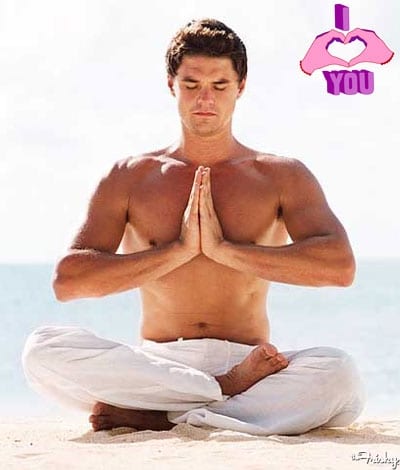 Actually, you’re in India right now. I miss you. I don’t know if you’re there because of a girl or not. Maybe you’re there to get better at the harmonium. God, I hope so. I hate to say it, M, but you sound awful when you play the harmonium at the beginning of each class. Your off-key chants to Ganesh or Krishna or whatever Hindu God you’re getting all into that week are painful. It’s all I can do to keep from laughing. But I love how you know how bad you are, but chant anyway. I appreciate that.

Also, you make up for your bad chanting by sharing the most amazing “deep thoughts” during class. I must confess: I write down your spiritual monologues after class. Not because I’ve been enlightened by them, but because I intend to use your words in future pieces of writing. It’s that good. Like, one time you started class by saying, “Who wants to look better naked, raise your hand?” Of course, all the girls in the class (your class is always all girls) raised their hands. And you replied, “Well, then you’re in the right place. Yoga will help you look better naked. If that’s the only reason you’re here, fine. But if you want more, there’s more.”

Sometimes your metaphors get more confusing “From far above, cars look like they’re driving themselves …” you started. This one went on for a really long time until you got to your  wisdom punchline (that’s what I call them). “Your body is the driver. Get to know the driver.” HAHAHA! I’m totally going to say that to some guy in bed. Or maybe I’ll turn to him after sex and say, “How’s your bliss body feeling right now?” I promise, I will credit you.

But I like it best when you use allegory. Like the story about the flies and the bees living in the sewer. “The flies find the shit, the bees find the flowers.” The moral: Be a bee. Incidentally, I told my ex-boyfriend this story and his response was, “That’s ridiculous. Flowers can’t survive in sewers.” Precisely. You care not a lick for logic. For that, M, and for all the other ways you make Downward Dog more bearable, thank you. You really are a great teacher.