Amber Rose has responded to Pink’s shady and frankly rude response to Kim Kardashian’s Nude Selfie To End All Nude Selfies, Apparently by pointing out that Pink, if you’ll recall, has done a few nearly-nude performances herself but didn’t take issue with “using her body” then. “Silly excuses” indeed:

Damn Pink we were all born naked society sexualizes our breast and bodies. If a grown mother of 2 is comfortable with her body and wants to show it off that’s none of ur business or anyone else’s. Now, if u wanna talk to kids and be a mentor to young teens, tell them to go to school and to not use their bodies to get ahead?! I’m all for it! But please as a grown woman let another grown woman live as she wishes. That’s our problem! We’re so quick to down each other instead of uplifting! Pink, We’ve seen u damn near naked swinging from a rope( Beautifully) but what’s the difference between a rope, a pole and a pic on Instagram? Classism. Because u sing while ur half naked does that make it “Classy” or is it because u have a “talent”? I’m not dissing at all Pink just curious after u said “You’ll never have to make a silly excuse for yourself”.

Can we stop talking about this now? Is there going to be a UCSB class about the politics of Kim Kardashian West’s nude selfies? I’m not always the first person to say “this shit doesn’t matter,” but if we aren’t all totally used to Kim’s naked body and we haven’t accepted the fact that a lot of people’s tits are on the internet somewhere, aren’t we living in denial? Was that selfie really that scandalous when it had censor bars? Is the very shape of a woman’s body that incendiary? And why on Earth is it that most of the people who have come after Kim are other women? Where did that sex-positive feminism go? Why are we still beating the “good role model” dead horse? Why aren’t Pink and Chloe Grace Moretz telling The Game and Justin Bieber and Zac Efron and every other guy on Instagram to put their shirts on and stop sexualizing their bodies and use their brains and #bestrong and be good role models? 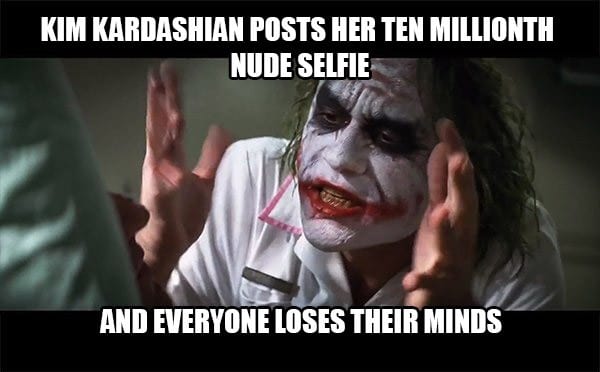 Excuse me while I go weep in a corner until this is all over.

Pink Weighs In On Kim Kardashian Selfie Debate, Because We Need More People Weighing In On This

Brad Pitt and Angelina Jolie’s prenup should make splitting property easy, but what about their kids?