How A Bikini Wax Saved My Sex Life

I must say that, ever since I took Women’s Studies in college, I’ve been a natural sort of woman. I assumed that men who wanted their partners to wax their pubic area were closet pedophiles. Pubic hair, I reasoned, was what made a woman a woman. Why get rid of it? I now have my answer: because I’m a mom. I realize that may read like a non sequitur, so I’ll explain. Joy-filled and rewarding as it is, motherhood has presented an unfortunate side effect (okay, many side effects). It has obliterated my sexual identity. This former lace panty buying, push up bra wearing, sex goddess feeling youngster is now a frumpy feeling, cotton underwear wearing, station wagon driving mother of three-year-old. I’m also a full grown woman who happens to be in the middle of a six-month long dry spell. I need a sense of sexuality like yesterday, okay?

Enter: the bikini wax, one that will shape my wooly front side into the sensual picture of a martini glass. You might accuse me of looking for desire in all the wrong places, but something about the bikini wax has captured my sexual attention. A trip to a sex therapist or a week in Fiji might be more rational ways to reclaim my sexual identity, but the Martini seems like such an attractive quick fix.

Which brings me to the hair salon, where I am standing, feigning interest in the skin care products. I hear someone say my name. I look up and see Carmen, the Martini Glass pro. Everything about her — from her long eyelashes and full lips to her slender hips and high heeled boots — drips sensuality. She takes me to a private room. 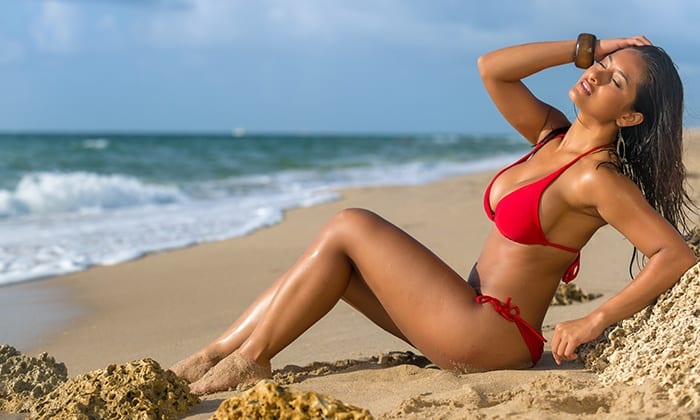 “You want the Martini?”

She stands and stares. I’m supposed to be doing something.

“Uh, you’re going to have to tell me what to do. I’ve never gotten a bikini wax before.”

“Just take off your pants and get on the table.”

“Okay,” I say. I start to unbutton my pants, but I’m thinking that I could use a little privacy. Even at the gynecologist’s office, the nurse hands me a gown. The gynecologist is going to get up front and personal with me, but the gown gives me the illusion of not having someone staring closely at my nether regions.

Ah, yes, the nether regions. There’s really no good word for this area of the female body. The technical term, vagina, describes only one small part of the package, and various slang expressions (I could list them, but must I?) are anything but pretty words. Perhaps the ugly terminology is appropriate. When I was a teenager and read that it was a good idea to place a handheld mirror underneath the thing in order to get a good look, I had just one thought: “That’s butt ugly.”

That’s my term of endearment for the front side, “Ms. Butt Ugly.” Over the years, I’ve learned to feel comfortable with lights on sex, but that’s mostly because my husband is a butt guy. He’s so interested in my back side that I can almost forget my front side exists.

Perhaps Carmen can beautify Ms. Butt Ugly without actually looking at her? No, I didn’t think so. She’s standing with her arms crossed, waiting. I drop my pants, step out of my panties, and climb onto the table.

“Spread your legs,” she says. I do. She walks around the table and looks at Ms. Butt Ugly from all angles. As she walks, she periodically strokes my pubic hair. She’s checking out Ms. Butt Ugly the way my mother, a visual artist, looks at a still life.

“Do you want a very thin stem or a wide one?” she asks.

“I don’t know. I’ve never done this before. I’m a little worried about the pain, so maybe I should go with a wider stem?”

This much I know. My father descended from hairless Brits and Germans. My hair follicles inherited none of his genes. I got the genes from the Russians on my mother’s father’s side of the family. My grandfather could have easily won a gorilla look-alike contest. Thanks to his genetics, I was teased ruthlessly in elementary school for having hairy arms “like a boy.” If I didn’t wax my eyebrows, they’d grow together. I didn’t realize I also had an excessive amount of pubic hair, but it also doesn’t surprise me, and perhaps it’s why I consider the thing to be so butt ugly in the first place. 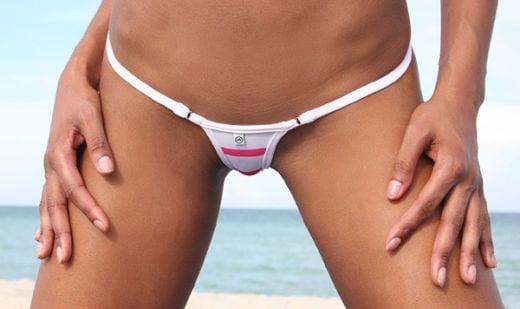 “Why did you decide to get the Martini?” she asks as she gives me a pre-wax trim. I explain that I’m trying to revive my sex life, and that my husband and I have become so bored with one another’s bodies after eight years of marriage that I’ve resorted to S&M, with her being my sadist.

Okay, I didn’t really say that S&M part, but I thought it.

She pulls out the tongue depressor, dips it in the hot wax, and spreads it over the left side of what will soon be the stem of my glass. She places a cloth over the wax and pulls fast and hard. “Oh, that’s not bad at all,” I say. Then she does the right side, and I almost jump off the table. “Uh, that side was a lot more sensitive,” I say.

“One side always is,” she tells me.

Then she rips off the hair along my C section scar. I flinch. She runs her index finger over my scar and says, “You’re a mom, yes?”

“I’ll be thirty-seven in a couple weeks.”

“Thirty-seven and a mom?” she says, pointing to my abdomen. “You look great!” I decide to forgive her for calling me hairy.

She continues to wax and rip, wax and rip, all the while instructing me to move my legs into different positions. At one point, she wants them “froggy” with my feet together and knees out to the side. Then she wants my legs straight, but pressed together.

Later, spread eagle. “Ah, beautiful,” she says. She’s done transforming the ugly duckling into a swan. I step off the table and get dressed.

Later, at home, I drop my pants and look in the mirror. For the first time in my post pubescent life, I actually like what I see. I feel a bit guilty in my newfound awe of my nearly hairless front side. If Gloria Steinem knew about it, what would she say?

Would she declare me a victim of a patriarchal society that values hairless front sides over hairy ones?

You know what? I don’t care what Gloria thinks. I love it. I do. It’s beautiful. I no longer want to call it Ms. Butt Ugly because my front side is fantastically fetching. From now on, my front side is, “The Martini.” Ms. Butt Ugly? I’ve given her an early retirement. It was about time.

Later, when I show The Martini to my husband, he’s just as smitten. Did it resurrect my sex life? Did it ever! We now not only have lights on sex and eyes open sex, we have All Eyes on the Martini Sex. My husband would probably still describe himself as a butt man, but he’s definitely a Martini man, too.

I’m happiest to report that my new and improved front side has much more sensation. The mere touch of his fingertips against my newly bare skin is enough to make me shudder. Don’t even get me started with what happens if he goes there with his, uh, well, you know. In the past, I viewed oral pleasure with a mixture of excitement (oooh, baby, that feels nice) and embarrassment (you’re putting your mouth on that?!). I felt as if he was doing the sexual equivalent of road kill removal. It was a dirty job, but it was part of the job description of being my husband. Now, I feel as if he should thank me for the experience. I feel so much more inviting, so much more beautiful, so much more worthy.

Even when I’ve got my pants on and the Martini is under wraps, I feel special, as if I’ve got the equivalent of the Hope Diamond down there. I smile more. I stand a little taller. I sway my hips as I walk. That cotton underwear? I’ve replaced at least half of the lot with lace. The frumpiness? Gone. The push up bras? Not everything from the 90s is worth saving. That station wagon? Still driving it, but I could just swear that the other drivers can sense that a Martini Mom is in their presence.

Trends For Men: Garter Belts To Hold Up His Thigh-Highs!

Ask Our Underwear Expert: “Help! My Boobs Are Small AND Saggy!” & “What’s Up With Underwires?”