The Case Against White Wedding Dresses

Now that targeted marketing knows that I’m getting married, all of my social feeds and every ad sidebar on every website I visit is covered in white dresses, white shoes, white veils, white gold bands, beautiful colorless diamonds. Lots of white women in their white gowns, posing in white rooms for advertisement stock photos.

I wish that there was a timer you could put on targeted ads, or that they were more intuitive, and that when you did purchase the wedding item you need, they’d stop advertising that item to you. I bought my dress this weekend. It is black. It’s a skirt from Anthropologie and a leotard from American Apparel. I’ll probably get a belt from ASOS, and I’m finishing it all off with gold flats and a crap-ton of rhinestone, druzy, and gold-spike jewelry. I’m going to look like a space ballerina and it’s going to be awesome.

Despite the fact that within two weeks of getting engaged, I was able to obtain for myself a suitable dress, I will be inundated with white gowns for probably the next year. This dredges up a lot of bad feelings from my past: At 27 years old (almost 28), I’ve been married and divorced once already. It went very badly, for me. I’ve planned a wedding with the bells and whistles — flowers, a mansion, a DJ, a photographer, a videographer, cocktail appetizers plus a three-course meal, cupcake towers, and, of course, a big, fluffy, white Cinderella ball gown. 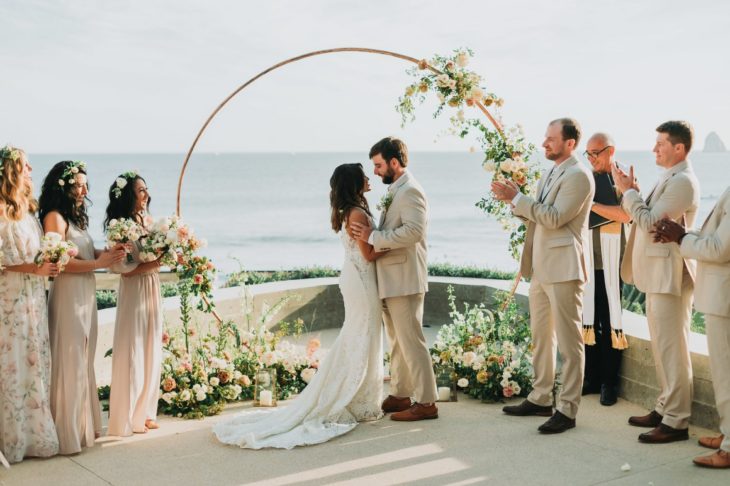 It’s not the failure of the marriage that bothers me when I get these ads — I’m so glad it failed. It was toxic. It was traumatizing. (Literally: It was abusive, I have PTSD.)

The wedding costs that I object to while I’m planning my second wedding — photographer, DJ, giant meal, giant fancy venue, giant dress, programs, personalized napkins, and all the fucking flowers — were the same expenses I objected to the first time, but on which I was overruled by my then-fiance and his family and his conventions. To be fair, though, it’s not just them. They are not the only people who uncritically think that this shit is worth spending money on, or else I wouldn’t be getting targeted ads for diamond rings that I refuse to buy. And they are not the only people who think that a bride should wear a white dress as a matter of course.  I have a photo of me in my big, 10 lb. white dress, shoes off, holding my skirt up, skanking to “Punk Rock Girl” by the Dead Milkmen that kind of sums up everything about that wedding: Here you have me, with white-and-black hair that looks like it’s collar-length but in fact was cut in a spiral that started at my bangs and looped around my head to be collar-length only at its very longest. My contributions to the playlist were bands like the Buzzcocks, the Dead Milkmen, Streetlight Manifesto, and Andrew WK. The only thing I was really waiting anxiously for during that wedding was the opportunity to mosh and skank with my friends. I have never been a Cinderella-wedding type of person, and yet here I was, stuffed into a big beaded white gown, and why? 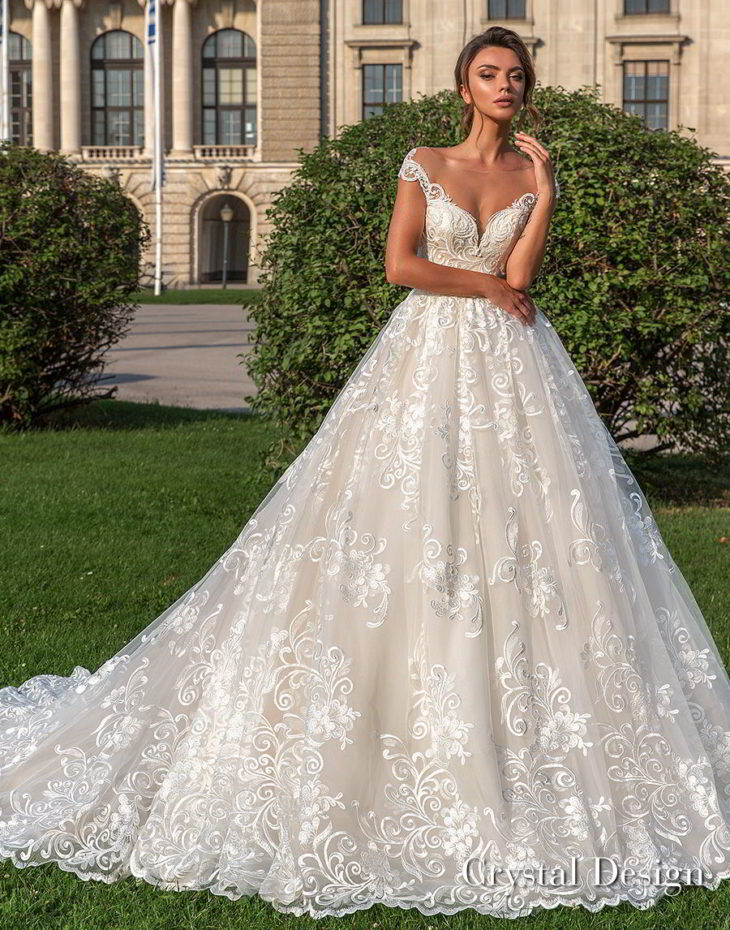 No matter how much we — modern women — try to stuff it down and out of our memories and consciousnesses, the fact is that the traditional white wedding is a narrative of a pure, innocent, and naive female being handed over from the care of her father to the care of her husband. Even that smashing-the-wedding-cake-into-the-groom’s-face thing is a ritual of performed childlike naïveté. The entire thing is constructed to bolster male egos, to inform men that they are, in fact, in charge of themselves, their wives, and eventually their families. It’s to make men feel secure in the strength of their masculinity. The traditional white wedding is an act of female servility. I have no idea why even modern women who are well-versed in feminist theory, in control of their careers, self-sufficient, self-possessed, and confident continue to let their fathers say“Walking you down the aisle was just something I always dreamed of doing” and their husbands say “I just always wanted a traditional wedding.” Fiancé, father: I always dreamed of being a powerful woman. If you love and respect me as a powerful woman, my love and respect should be more than enough for you.

Then there’s the connotation of white-as-virginal, which is not how the white wedding dress started, but it’s what it has come to mean. I haven’t been a virgin for over 10 years, like most people. When I met my former spouse, I was not a virgin; if I had been a virgin when we met, I certainly would not have been after the five years that passed between our first date and our marriage. But beyond that sort of moot point, the idea that it’s women who should have to wear white to connote ourselves as acceptably innocent and naïve for the men we’re marrying is laughable to me. I thought that women had gotten to the point where, today, female gender-specific suffering — the incredible difference in the rate of female rape and abuse victimization to male rape and abuse victimization, discrimination in academics, discrimination at work, sexual harassment, street harassment, online harassment up to and including gendered death and rape threats, birth rape — was all so on-the-table that no reasonable person would think that it’s anything more than a joke to say that it’s women who are sheltered and protected and ignorant about the harm the world can inflict on a person, not men. I mean, hell, my fiancé has never once received a piece of hate mail. Just this morning I got one that read, “I love that you are a dumb cunt and make all women look bad because your are trash that has not been tossed out yet die you fucking cunt” [sic]. I got a “holy crap” from another woman over that e-mail and my response was, “Oh, that’s far from the worst I’ve ever gotten.” Sit down and rent a white tux, grooms-to-be. You have no idea how cruel the world can be, and it’s likely that it’s your wife who will be able to advise you best on how to deal with it, because she’s had a lifetime of practice. 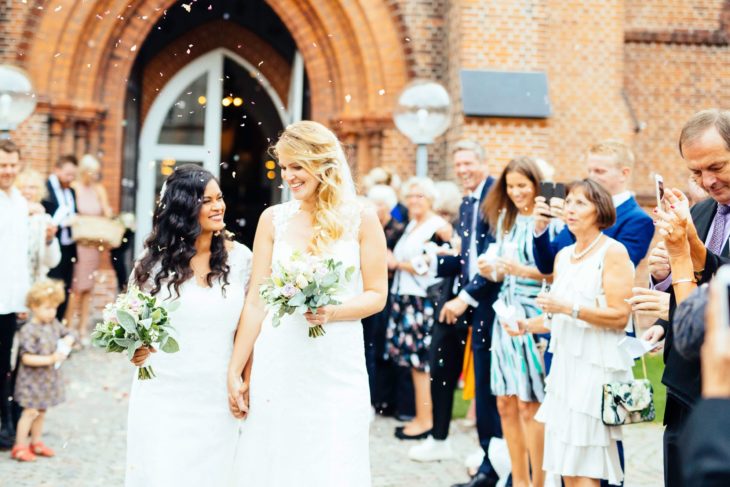 Source: Dancing With Her

Or, you know, maybe it’s more reasonable to say that if a woman wants to wear white to her wedding because she likes how it looks on her (and, come on, white looks good on so few people), then bully for her and she can buy whatever dress she wants. Maybe it’s more reasonable to say, hey, everyone, let’s stop making assumptions about the strength and stoicism of all men and the purity and innocence of all women, and stop making our weddings into performances of those assumptions. That’s not accurate or fair for anyone. Maybe it’s more reasonable to say, let’s treat our weddings as if they are the foundation of a partnership between two real live human beings who are not stereotypes and allow them to be their best selves at their wedding rather than asking them relentlessly for the duration of their wedding planning to be flesh-and-blood wedding cake toppers, sentient mannequins, because our culture is used to the pat and boring story of boy-meets-girl-boy-wins-girl-boy-and-girl-get-married and it wants to hear that story over and over and over, instead of real stories about real couples who have personal and mutual obstacles to overcome before they can manage to trust another person enough to commit to them for a lifetime.

Or maybe I’m overreacting to or overthinking what are “just” targeted ads that are trying to “help” me make it through wedding planning. (I’ll admit that an ad I saw for the registry service Zola was helpful, sure.) But, I don’t know, I don’t think it’s possible to overthink commitment, purpose, fidelity, or identity. I don’t think it’s possible to say that a person can think too critically about a decision they’re making ostensibly for the rest of their life. God knows, I put on that white dress and didn’t think critically enough about who I was and why in god’s name I would wear a fucking ballgown, ever. I was a queer punk rock girl who was the bride in a wedding that didn’t consider her opinion relevant. No wonder it didn’t work out. 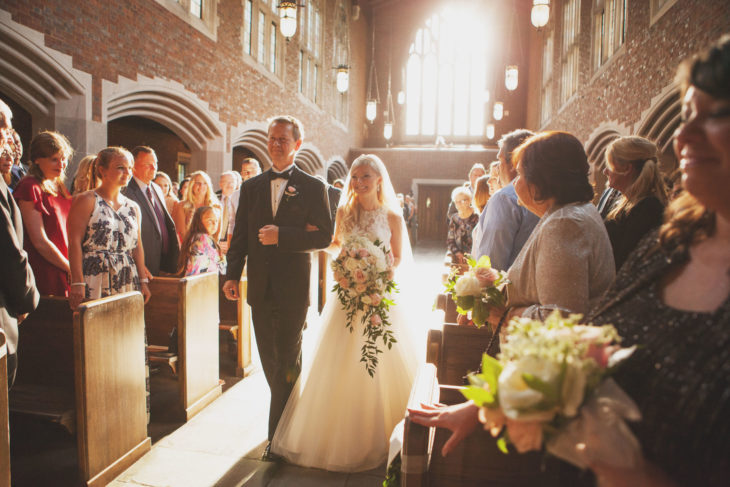 My fiancé was surprised at first when I told him I was going to wear a black dress, but only because he had never even considered the possibility of a bride wearing anything but white (fancy that). That surprise, though, has led to me questioning him for reassurance — are you sure you’re OK with me wearing black? Are you sure you’re OK with the dress I picked? Why are you OK with it? “Because all I care about is that you’re happy,” he tells me. Happy, to me, looks like taking a rare opportunity to indulge in buying a crap ton of rhinestone and druzy jewelry and looking like a space ballerina in a black leotard, a black skirt, and some gold flats. That’s the woman he’s really marrying.

25 Totally Free, Realistic & Non-Cheesy Ways To Give This Holiday Season