Chart: The Most Evil Sidekicks On Your Favorite Reality TV Shows

They’re “not here to make friends,” and they’ll probably throw you “under the bus,” but these ancillary characters on some of our favorite reality TV shows serve a vital purpose: They are the pot-stirrers and trouble makers, the assholes that help incite fights and cause trouble. And like a moth to a reality TV flame, they’ll keep coming back, attracted to the warm glow of the production lights. On their own, these people probably aren’t interesting enough to watch (except Allison DuBois — I would watch her until forever) — but their brief time in the spotlight captured our attention, and in some cases made us question humanity.

Below, we’ve chronicled all the most awesomely trainwreck-y, fun to watch minor reality TV show villains. Let us know who we forgot in the comments! 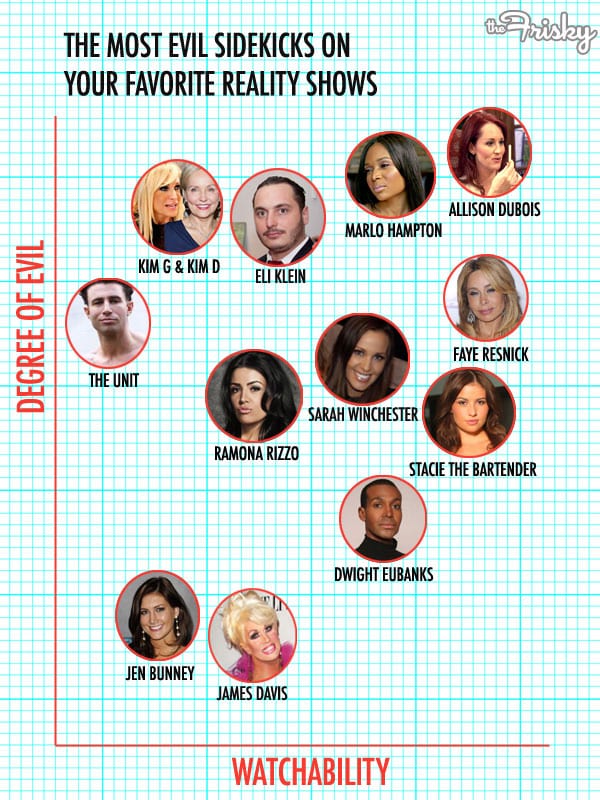 Faye Resnick, “The Real Housewives of Beverly Hills.”Â Was somehow involved in the O.J. Simpson trial as a “friend” of Nicole Brown Simpson’s, who later wrote to tell-alls about her life and the trial. Friend to Kyle Richardson, enemy to Brandi Glanville and the world.

Marlo Hampton, “The Real Housewives of Atlanta.”Â Probably one of the most embarrassing people to take to South Africa, like, ever. Remember when she “made it rain” on the dance floor in Capetown?

The Kims, “The Real Housewives of New Jersey.”Â We’re pairing these together as a hydra-headed beast because obviously they sprouted from the same hair salon (where frosted tips was on sale). Also,Ã‚Â N.B. to Kim D., that is the most ridiculous spelling of Posche ever.

The Unit: “Jersey Shore.”Â Attempted to break up Snooki and her baby daddy by intimating that Snooki went to the bone zone with “The Situation” (somewhere someone is reading this sentence and weeping).

Ramona, “Mob Wives.”Â Hit the jackpot: Wasn’t a regular cast member but due to her bitch-slapping dramatic ways, she did the thing every Evil Sidekick dreams of — she got a starring role second season.

Stacie The Bartender, “The Hills.”Â This woman flirted with Spencer Pratt, so she’s obviously made from rat tails and desiccated fish parts.

Eli Klein, “Gallery Girls.”Â Purveyor of fine Asian art wares, which is an expensive way of saying “I have an Asian fetish.” Do not look directly into its gaze.

Sarah Winchester, “The Real Housewives of Orange County.”Â Guys, not only is this one unstable, but she’s also a descendant of the crazy Winchester gun family. She’s the gal that tried ruining Heather Dubrow’s renaming party (which is a thing, I guess) by drunkenly eating the bow off the cake. Also, you don’t fuck with Terry Dubrow, not in my book.

Angelina Jolie to get full custody of 6 kids temporarily, while Brad Pitt has visitation