Dealbreaker: He Didn’t Tell Me He Was Engaged Until We Were About To Have Sex

Mike* added me on Facebook and struck up conversation the day after our mutual friend – who was under the impression that we were both single and searching – set us up. We hit it off immediately. I did all the relevant Google research, watched YouTube videos where he discussed important things he learned at Yale, internally combusted over how perfect we seemed for each other and hypothesized about what our babies would look like.

Conversation seemed to be going so smoothly and I was feeling giddy as fuck, so I didn’t even bother to give myself a moment to breathe and trip over reality when he said, “Screw it! I’m driving to LA tomorrow to take you out.”

The thing is, although I get that the above was potentially just naïve by me, what followed was perhaps one of the best, most fun, most connected first dates I’ve ever had. Conversation was engaging and never ending, we laughed so much we made outright dicks of ourselves, and I felt extremely comfortable with him. I literally cannot emphasize enough how uncanny it all felt, which is a sentiment he later voiced out loud when he quipped that it felt like I was “already his girlfriend.”

The plan was for Mike to stay at my house, and although we’d both initially agreed that he was sleeping on the couch, he obviously never so much as glanced at my living room before winding up in my bedroom. Contextual side note: I’m a normal-but-not-prude girl, into a fair serving of definitely-not-prude things as well as a healthy portion of normal things. Are we clear? I’m pretty open-minded. So anyway, after a whole lot more amazing conversation, Mike and I cut to the chase. He got his ridiculously perfect body naked pretty quickly and I nearly had kittens over how ridiculously perfect it was. That was one of the reasons I thought I was dreaming. The other reason was that there was no possible way that this could be so real and so perfect, right?

RIGHT. Bang on. Correct. Because in the very moment before the actual penetration of his penis into my vagina, Mike paused, and the following words fell out of his mouth like an easy, breezy, declaration:

“I’m in an open relationship, I live with my fiancée and my fiancée knows I’m here.”

His loved-up, sweet-faced expression didn’t falter. In the same breath, he picked up his cellphone, scrolled through his photos and without missing a beat, landed on a naked pic of said fiancée.

It all happened so quickly, so absurdly and so seamlessly that you could have set it to an Enya song. By the time I managed to collect my thoughts and realize that instead of almost-banging we were now staring at an artistically composed photo of some naked woman Mike was going to marry, he was onto the third or fourth photo.

There was an interesting buzzing sound in my ears, kind of like this high-frequency version of an insane person screaming “what the hell!?” upon finding that their white-walled cell has no doors. In an emotionless, altered state of consciousness, I told Mike that he could exit the very same way he came in, and then I gave him instructions on how to lock the door behind him and kindly requested that he never come back.

Mike was confused. Mike apparently did not understand what part of the whole fiancée/open relationship/naked photos saga I was somehow not cool with. Some kind of dialogue ensued which I believe was some combination of patronizing down-talk and laughing on my behalf, but my subconscious politely kept me in a state of shock throughout the entire ordeal. He was sorry, he was stupid, he was this, he was that and then finally, he was gone.

The mutual friend who set us up (and swore up and down that she had NO IDEA about Mike’s situation) later told me that Mike had slept in his car in a Whole Foods parking lot for the rest of the night. Was I supposed to feel sorry for him? 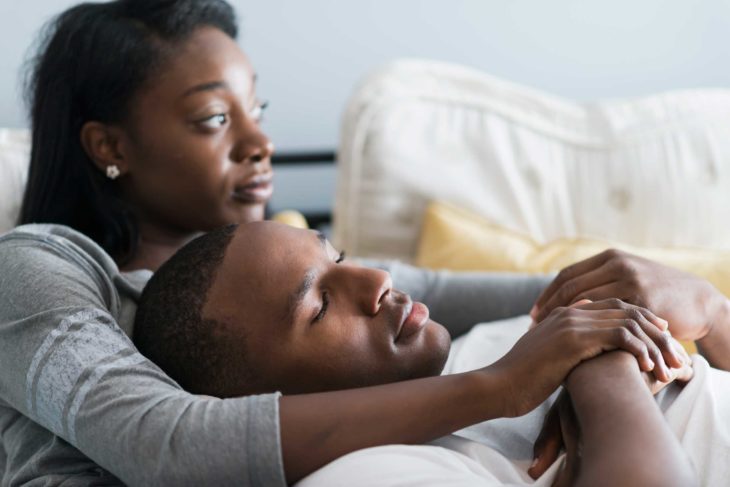 I think the worst part, in retrospect, wasn’t necessarily that I’d been stupid enough to buy into something so quickly and expect a positive outcome. I’d rather give people the benefit of the doubt, and if presented with the same set of circumstances that led up to that night again, I’d probably have played it the same way. I think the worst part was wondering how our two worlds – which were so, so much more different than I ever imagined – could possibly have collided, and collided in such an epic fail … and yet my instincts had been so sure we were onto a good thing.

I can’t judge his lifestyle choices, but I can and will judge him for imposing them on me, knowing all too well that I had no. effing. idea. These are the kinds of details that need to be disclosed before sex, before dinner even, before saying that you’d like to be set up.

Dry Spell? Then You Know What This Is Like…

Is It the Right Time to Free the Nips?