About once a week, I “work from home,” which really means that I work from a coffee shop near my apartment. It’s a pleasantly balanced crowd — the other young professionals tapping on their laptops give it an “office away from the office” feel, but the parents with strollers and groups gathered around tables remind me I’m in a public space. I get my best work done with a nondescript hum in the background, hence why I rarely work from my actual home in my pajamas. It’s easy — no, ideal — for me to block out low volumes of noise in order to concentrate on my work.  In fact, I actually listen to a coffee shop sounds “white noise” audio on loop when I’m at The Frisky’s office. 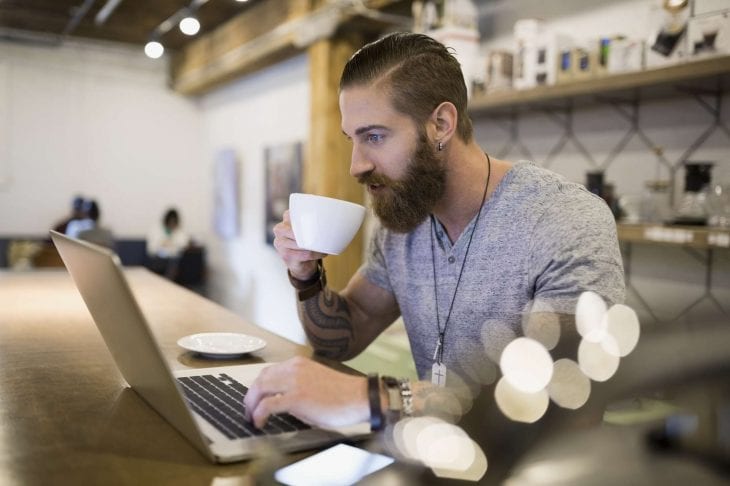 So it was with great annoyance that last week I had the misfortune to sit next to a woman at my coffee shop WHO TALKED REALLY LOUD LIKE THIS BECAUSE SHE HAD NO SELF-AWARENESS ABOUT THE SOUND OF HER VOICE.

This woman was sitting with a friend. The sound level of conversation began normally enough — that is to say, they were sitting at a table near to me but I wasn’t availed of every single back-and-forth in their conversation. Over the course of their chatting, one of the women grew animated began talking louder … and louder … and LOUDER. Literally, it was almost as if she was gleefully yelling her half of the conversation to her friend. She was definitely not using an inside voice; she was using an I-think-personal-spaces-are-my-own-jungle-gym voice. I could hear all her yell-talking through my earbuds and did not feel like blaring Katy Perry for God knows how long in order to drown her yell-talking out.

I instant messaged Kale, because we are assholes who take up two different tables when we go to a coffee shop together.

“This woman is so fucking loud,” I typed.

“Would it be awkward to ask her to lower her voice?”

But Kale, it should be noted, is just about the politest, manners-liest person there ever was. He would literally bend over backwards to not confront someone over an uncomfortable matter, especially an absolute stranger. It must be a British Empire thing. Me, I have no such sentiment. I find people WHO TALK REALLY LOUD LIKE THIS BECAUSE THEY HAVE NO SELF-AWARENESS ABOUT THE SOUND OF THEIR VOICE profoundly annoying. Maybe it is from living in New York City for the better part of 13 years now, but I don’t mind being assertive with an absolute stranger. To me, anyone who is violating the social code of “inside voices” is justified in getting a polite reminder that, yup, you’re still inside. And, in fact, once while out at a restaurant with my garrulous aunt — who, like this coffee shop woman, has a tendency to talk louder and louder when she gets animated — a table of women sitting next to us actually politely and respectfully interrupted our conversation to ask her to lower her voice. My aunt said, “Oh, I’m sorry!” and then lowered her voice immediately. Everyone went back to enjoying their Indian food. It was awkward, sure, but I mostly felt embarrassed that these women next to us had been uncomfortable. (I suppose that I didn’t realize my aunt’s voice had gotten so loud because I’m just used to that being the way she talks.)

So this particular day, I politely — emphasis on politely — asked the loud woman next to me at the coffee shop to quiet down. “Excuse me?” I said, turning to her and her friend, smiling. “Would you mind lowering your voice just a bit? I’m finding it hard to work.”

You should have seen the stinkeye that woman gave me. She rolled her eyes at her friend, scrunched up her face and turned away from me without a response. It was profoundly childish and rude. Suddenly I understood that this woman didn’t seem to have any manners, period. (Kale also saw the stinkeye from his vantage point and IMed “HAHAHAHAHAHAHA.”)

But, hey, at least she lowered her voice after that. The yell-talking stopped. Their conversation carried on at the totally normal volume they had been speaking at beforehand.

Fast forward to another coffee shop, another week. This time I was working with a group of co-workers. While all of us were typing and editing, we were also chatting amongst ourselves. Animatedly, I suppose. It’s possible that we were being disruptive — although more from laughing than from any sort of indoor yelling. (We were, after all, working.) Alas, a woman sitting at a table diagonally across from us, working by herself on her laptop, suddenly burst out a “SHHHHHHHHHH!”, which was clearly directed at us and our fun.

She didn’t even make eye contact; she just shushed us like we were rowdy teenagers in a library. All of us grown adults looked at each other with initial bemusement, then trying to stifle laughter. Did we just get shushed by a grown woman? I’m not disagreeing that we hadn’t been too noisy, or that we hadn’t been annoying her.  And obviously, given my own experience, I’m sympathetic to the fact that she needed to concentrate. But there’s something so impersonal, something so ungracious, about shushing other adults. It’s not like we were anonymous voices talking aloud in a movie theater, where I do think it’s justifiable to employ a robust shush.  We were sitting just feet away from her!  None of us would have given her the stinkeye had she politely asked us to lower our voices. Just like my aunt, we would have apologized and acted accordingly.

Grownups should have the skills to politely communicate with other grownups, even if it is awkward.  There are exactly two situations when it’s okay for an adult to shush another adult: one is when you’re in a theater watching a movie or performance and a stranger answers their cell phone and the other is when you’re trying to hear something important on the radio or TV — a jury verdict; a snow day cancellation; lottery numbers — and someone is blabbing away about a weird mole on their arm. Other than those two extenuating circumstances, you need to address adults with respect even if you are annoyed at them. I regularly wring my hands over the decay of basic manners — can people stop shoving people on public transportation, please? — but this is more like a meta-manners scenario. There is grace to be learned in how to manage someone else’s less-than-mannerly behavior. One rude turn does not deserve another.

It now seems like working in my office, or better yet, a library, with my “coffee shop white noise” audio is the path of least resistance. And I am reminded again, in our supposedly “social” age, how little social skills some people actually possess.

Make It Stop: “My Friend Is Constantly On...