Frisky Rant: Yes, My Name Is Maybe Hard To Pronounce (And, No, You Can’t Opt Out)

As I write this, I’ve just come home from a new gym. A man training a small group of us shouted personalized encouragement throughout in an effort to spur us along. “Well done, Karen!” “Two more reps, Jaz!” “Knees up, Ellen!” “Bum out, Phhhh … bum out!”

I know that when someone mumbles “Phhh” under their breath, it means me. This happens with relative frequency; if I had to guess I’d say bi-weekly. I decided to tell the trainer how to pronounce my name, because the longer this kind of thing goes on, the more awkward it gets for everyone involved. “Phhhh” isn’t fooling anyone, mate. I have a few variations on the theme of correcting pronunciation, but on this particular day I went with “It’s like the name Lisa, but with ‘fuh’ in front of it.” Earlier, when I picked up a prescription from a pharmacist I’ve seen several times over the past year, I let “fuh-lissa” slide. It’s a pharmacist — we’re not that invested in each other. I’m used to making these judgement calls.

I’ve had moments of resenting my parents for (unintentionally, of course) manufacturing a situation where I’d constantly need to correct people and (le horror!) be perceived as rude or discourteous. In addition to being uncomfortable for me, it’s clearly uncomfortable for others who genuinely want to pronounce my name correctly, but are confounded by it. As I child, I just wanted to be Nicole — Nikki for short, with two Ks and no C. Nikki is a sexy nickname, unlike Philly, my childhood moniker that went on for far too long.

I know that my parents were in a difficult situation when choosing my name, and they did make the best out of what was a complicated situation. My name wasn’t always Phylisa. For about 24 hours, my name was Sarah Phyllis. My middle name — Phyllis — was my father’s mother’s name. She had died the year prior, and it is our family’s tradition (Ashkenazi Jews’ tradition, that is) to name a new baby after someone who has died. My late paternal grandmother was the obvious choice, and naming me after her felt meaningful and appropriate to them; it was also expected. However, neither liked the idea of calling their firstborn “Phyllis” in the mid-’80s. No offense to my late Bubbi, but the name had long gone out of fashion. After some in-family heated discussion, it was decided that it would have to be my first name that honored my grandmother … none of this modern twist on tradition. (“Why do we do this? It is because of our tradition” — Tevye, Fiddler on the Roof.) With a little help from my great-grandmother, my mother came up with Phylisa. Pharrah was vetoed, as was Phoebe; neither was close enough to the source. 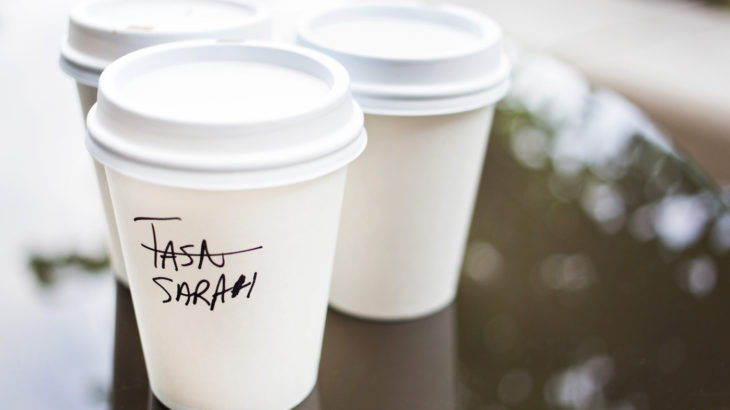 People love this story. They find it “moving” or “beautiful” or “sweet,” and I often leave out the anguish it caused, or the guilt my parents feel over sticking me with a name that has proven challenging. My dad changed his own name at 20 for work reasons, and told me around 20 that I could do the same if I wanted. I can’t imagine having a different name and generally speaking, I’m not the type to change something important to me to make it easier for other people.

Sometimes people unnecessarily exoticize my name, perhaps thinking they’re being open-minded by pretending my name is the most interesting thing they’ve ever heard, or that they are culturally sensitive if they like it. Usually my explanation follows one of a few exceedingly common questions.  “What a unique name, where does it come from?” “Is that a family name?” “Are you Spanish?” For some reason, I feel like I have to perform my own interest in the story, too, even though talking about the origins of my name is about as enthralling for me as talking about the process of making toast. After hearing the story (which I tell more often than I’d like, but I’m never one to shirk a personal question), people may assume that I’m more religious than I am. It’s been followed by “So, do you keep Kosher?” several times. “How unusual!” is another common one. Honestly, casual acquaintance, your opinions on the unusualness of my name could not be less interesting to me. The conversation could only be more boring if we were talking about my height or the age at which my growth plates closed. These, like my name, are things about myself that just exist as inbuilt parts.

We assume a lot about people based on their given names (still called a “Christian name” widely in Australia, where I live). If you have a name that is on-trend for your generation or a classic, like Elizabeth, you may never have considered this.  I once walked into a job interview and before she even said hello, the interviewer said “Oh! I’d assumed you’d be Black.” Obviously that’s wildly rude and grossly unprofessional, but the assumption is not unique to that woman.

Many of the names we struggle with are names with their roots in other languages. It’s okay to find them difficult, especially if they don’t “play fair” by the rules of the English language. You don’t look like a jerk for asking how to pronounce a Vietnamese name and then practicing it once with it’s owner. You do, however, look like a jerk for opting out of the name altogether. Even if other people’s names are difficult, we have to try them. I’d so much rather someone ask me how to pronounce my name — even multiple times!— than simply ignore it. Ignoring someone’s name is a microaggressive act of erasure; it’s a not-so-subtle way of saying that my individuality isn’t important enough for you to honor in the simplest act out loud. A few (!) people have asked if they could just call me Felicia. No, actually. No you can’t. That’s not my name.

Honestly, it’s not that hard. Have you ever been standing face-to-face with someone when they pronounce their name and your response is panic because no, you did not catch that? I have, too. Here’s what I do: Ask for a repeat, then watch their mouths as they say it. There’s a chance I’m being condescending when I say to someone “see how when I say my name, my mouth doesn’t make a ‘sh’ sound?”, but whatever. I’m helping. The onus is on the name owner to correct people or make sure that the world is pronouncing their name correctly, but it’s not that hard to go the extra mile and just ask or attempt to figure it out, rather than opt out or mispronounce. I was recently in a hiring position, and someone I was interviewing said something to the effect of “I know you introduced yourself, but I just want to make sure I’m saying your name correctly.” HIRED.

I remember my freshman year of college, when I had a raging case of mono (glandular fever, for those across and around the pond). I sat in the health center, feeling vaguely like I was on the brink of death. A nurse came out and called “Priscilla” in this hyper-perky voice that came out like Priscilla was waiting to win a free cruise. I looked around, battling a sense of shame for the poor Priscilla, a name I somehow have come to associate with evil genius. For me, it’s like Ursula, the name ruined by “The Little Mermaid.” These were the thoughts swirling through my feverish brain when it occurred to me that the nurse was calling me. “Priscilla Wisdom.” I actually laughed out loud. As I stood up and dragged myself towards the office, I snarled “so, you just looked at the first letter and guessed the rest, then?” Because HONESTLY. Priscilla? A name isn’t a guessing game, and if it absolutely has to be, make it an educated guess. This was a case of looking at someone’s actual name on an actual medical form and then using it to identify them, I thought as I lay with an IV drip in my dehydrated arm. The nurse looking at name and deciding she did not give a fuck made me feel worse, and further from home.

Once I sent friend requests to all eight of the Phylisas on Facebook, because I figured they’d agree that the struggle is real. Three accepted, but I was shocked that none of them responded to my very quippy and hilarious message about being in a secret society.

I like that most people haven’t met another Phylisa, and I’m proud when people say it’s a pretty name. About 10 years ago my friend’s college roommate told me that she wanted to name her daughter Phylisa, and I admit to feeling honored. I did, of course, tell her not to. It may be a pretty name, but it’s not an easy one. If you want to give your daughter a good/pretty/strong/interesting name, call her something biblical that sounds vaguely familiar, like Ruth. And then teach her how to be nice to people with hard names.

Dater X: Short Stacks With A Side Of Self-Reflection