Girl Talk: I’m Not A Recovering Alcoholic But I Act Like One

“She doesn’t drink,” my Mom said when someone offered me a glass of champagne at my sister’s wedding last summer.

“Mom!” I hissed. “Can you say ‘She doesn’t like to drink’? People are going to think I’m a recovering alcoholic!”

But after nodding no time and again to waiters coming around to refill wine and passing my empty glasses back to them, I noticed that to the casual bystander, I appear to be a recovering alcoholic. I don’t know anyone else who just doesn’t drink because they don’t like to, and won’t even have a sip of champagne for a toast. Unless they are sober. Which is when I realized that I have a lot in common with recovering alcoholics.

When asked why I am abstaining from alcohol, I often get nervous or uncomfortable and find myself providing lengthy explanations. I usually end up sounding like I’m lying.

It usually goes something like, “Hey, Jen. Do you want to join us for happy hour?”

Me: “Oh, no thanks. I don’t really drink. I mean, it’s not like I don’t drink. Or I never drank. It’s just that I used to drink a lot but then I decided to stop and now my tolerance is so low that I can’t even have one beer without getting drunk. It’s a long story. Um … have fun!”

One standard drink is equal to 14 grams of alcohol, which is the same as a glass of wine or 1.5 fl. oz of whiskey, according to the alcohol guide from Drug Helpline Many drinks like martinis contain several shots of alcohol and therefore count as several standard drinks. If men drink five or more standard drinks or women drink four or more standard drinks on a given day this is considered heavy drinking. We live in a society where not drinking four or five drinks in a night makes you stand out. Imagine, for example, a night out with four friends in which everyone doesn’t buy at least one round of drinks.

Sometimes I’ll go to events and sip seltzer while trying to make small talk that doesn’t revolve around why I’m drinking sparkling water at a bar at 6 p.m. on a Friday night. Or I’ll pretend to partake in alcohol consumption. At my going away party when I left a job a few years ago, I promised I’d drink. So as a goodbye present my boss got me a six-pack of Stella Artois, which is the beer I pretend is my favorite. I left the beer untouched throughout my party until I eventually hid it in my bag, pretending I had drunk all of it. I was able to finish the six-pack six months later, and only with the help of my neighbor who drank it all for me. For my recent going away party I gave up the ruse, and my coworkers took me out for a burger and Diet Coke, which was way more my speed.

Another thing I have in common with alcoholics is that I’ve ended up dating a number of alcoholics. Sure, this may qualify me for Al-Anon more than AA, but it puts me in that general ballpark. Most of the men I’ve loved in that love fucking hurts way have been alcoholics—either recovering or active. I prefer the recovering ones, but I used to get drunk with an active one, even though I don’t like to drink. Which I think qualifies me as having co-dependency issues. But boy do I love a guy working a strong 12-Step program. 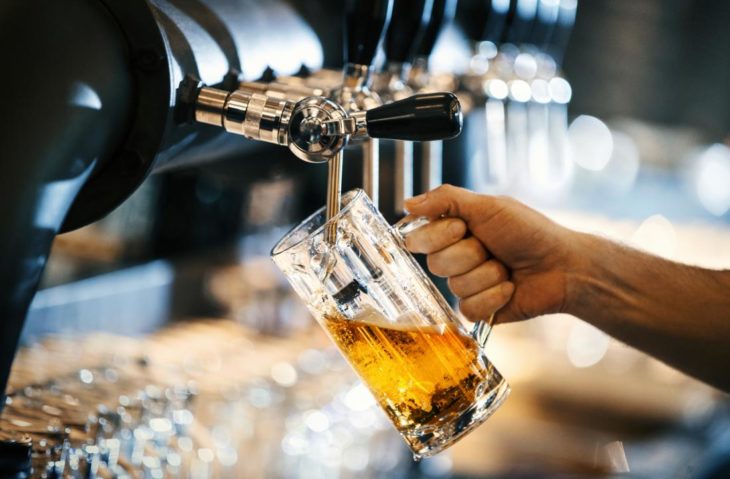 Come to think of it, most of my friends are recovering alcoholics. Because I don’t drink, these are the perfect companions for me. My friends who drink do boring things on the weekends like going to bars. I used to go with them, but I got tired of trying to make one drink last all night and watching everyone around me get wasted and start fights or make out with strangers. So now I enjoy sober plans with sober friends, like going to the movies or coffee shops. And although I haven’t been to one yet, I was thrilled to find out about the existence of AA dances and can’t wait to go somewhere that encapsulates so many of my favorite things. Dancing! Sobriety! A room full of wounded, sensitive men who want to talk about feelings and God and are all my type!

I’m also drawn to and comforted by the language of AA. For years I’ve been reading The Language of Letting Go by Melody Beattie every day, a book of meditations based on the 12 Steps. And I say the Serenity Prayer when I’m anxious. Which is to say, I’m almost constantly reciting it. If you look closely at my mouth as I’m on the subway during rush hour or walking down the street gripped by obsessive worry, you’ll see that I’m muttering these words.

The last guy I dated was a recovering alcoholic and I used to make him talk 12 Steps to me to get me in the mood.

But perhaps the most compelling argument for why I could be a recovering alcoholic is that I started drinking when I was 14 and drank excessively through my teens and into my mid-20’s. I took those first drinks at house parties of classmates whose parents were out of town and keg parties in the woods for the same reasons I imagine that many alcoholics take their first drinks: to escape from myself and my life and feel more comfortable in the world. Particularly socially, and around boys.

So I downed cheap beer in red plastic Dixie cups, 40s of Bud, and bottles of Bartles & Jaymes Very Berry wine coolers. In high school and college and for a little while after, my life revolved around what parties I’d go to that week and when I was underage, how I’d get the booze. Every weekend I got wasted and then I’d finally feel comfortable around guys, so I’d make out with random ones. Also, I was a drunk crier. Inevitably I’d dissolve into tears at some point in the night while my “friends” serenaded me with Mariah Carey’s “I Don’t Wanna Cry,” which they deemed to be my theme song. 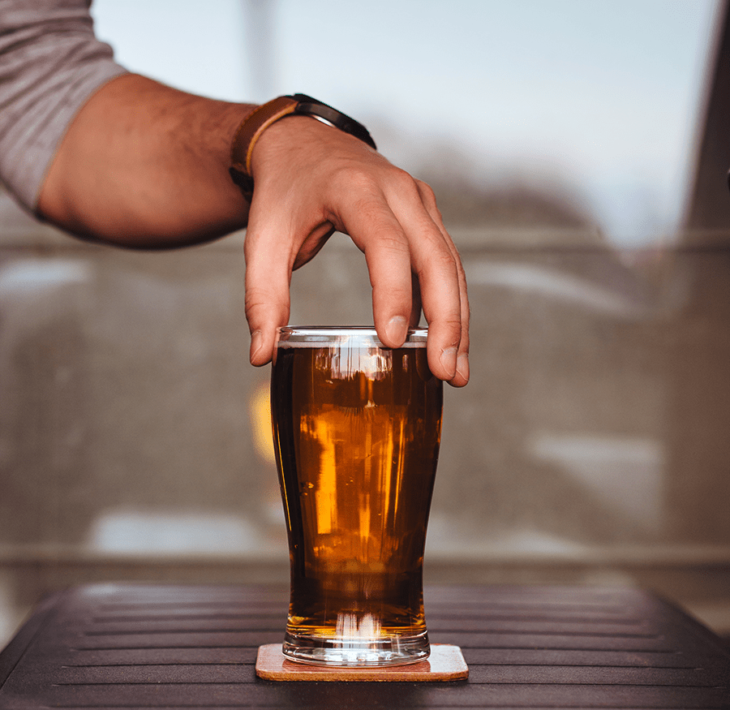 I have the war stories of an alcoholic, like the time, at age 15 and about 110 pounds, I drank 13 red, plastic Dixie cups of some combination of cheap keg beer, Sex On The Beaches, and White Russians. Then I passed out on the high school lawn and eventually made it home, where I woke up the next day with vomit covering me, my bed, and the wall, and by some miracle didn’t wind up in the hospital. Saturday and Sunday mornings were spent lying in bed with a cold washcloth on my face, praying for the pounding in my head to stop and the nausea to go away.

Then in my mid-20’s, I cut back on drinking (with the exception of going out for beers with my alcoholic boyfriend a few years later). This decision was initially prompted by the hangover I had the day after my birthday where I was so sick I couldn’t get out of bed until 11:30 p.m.

Shit, I thought, I just lost an entire day of my life!

But the real reason I stuck with curbing my drinking was that I became a workaholic, and unwilling to compromise my productivity for another hangover. I was busy doing important things and no longer had time to waste on getting wasted and feeling out of it the next day. I drank less and less over the years until my tolerance got so low that I can barely drink at all now. See my above my excuses that sound like lies. They’re actually true.

Today, the reason I don’t drink is different from my former desire to be compulsively productive. OK, not that different, but a little. Drinking makes me feel bad—physically and emotionally. Last year, I had two beers on a date and wound up puking until 4:30 p.m. the next day, and the guy affectionately started calling me The Girl With The Toddler Kidneys. The last time I drank at all was six months ago, and when I got home from the bar I felt so sad and lonely that I read an ex’s blog. Which, you guessed it, made me feel even sadder and lonelier. And not only am I drunk after half a beer, but I immediately feel foggy and checked-out. While at 14 I was desperate to escape, I don’t like doing things that take me away from myself anymore. Even though I’m not a recovering alcoholic, I want to live soberly, which to me means feeling present, alert, and like myself.

However, I often forget that I’m not really an alcoholic and I can actually drink from time to time if I feel like it. In fact, a recovering alcoholic once suggested that I drink more to help with my anxiety. You know, in cases where the Serenity Prayer isn’t cutting it. And I do love the taste of a cold bottle of Stella. But part of me still feels like I’m too busy to do something as frivolous as get a drink at a bar and possibly have to spend the next morning unproductively lying in bed. As a recovering workaholic though, I think it just might benefit me to loosen up on my sobriety a bit and take that advice now and then.

Dear Wendy: “My Boyfriend’s On Disability. Should I Dump Him?”

How to Get Through a Work Night Out...