Dating is hard enough, but imagine being a marijuana smoker trying to find love in a country that still, by and large, criminalizes their favorite herbal remedy. All you want is to find a like-toking pothead with a Volcano and a dealer on speed dial, but alas, your OKCupid matches are hit-or-miss. That seemingly cool dude you’re meeting for drinks might view your post-work bowl as a nasty habit that should have been left in college — if only you could, ahem, weed out the weed naysayers from the get-go. Sigh.

GOOD NEWS! You can, with High There, a new dating app being hailed as Tinder for pot smokers. (And people say stoners are lazy! Some stoner came up with app. What have you done today? Just saying.)

High There began in Colorado, naturally, and currently only operates in the 23 states where marijuana is currently legalized in some form. The goal was to make it easier for weed smokers to be upfront about their marijuana usage and habits, without fear of judgement. Users fill out the usual kind of profile information, as well as info about how often they use marijuana and their preferred methods (i.e. smoking, vaping, edibles, etc.), and then can flip through their potential matches, much like they would on Tinder, safe in the knowledge that anyone they might choose to go out with is down for a smoke out first. 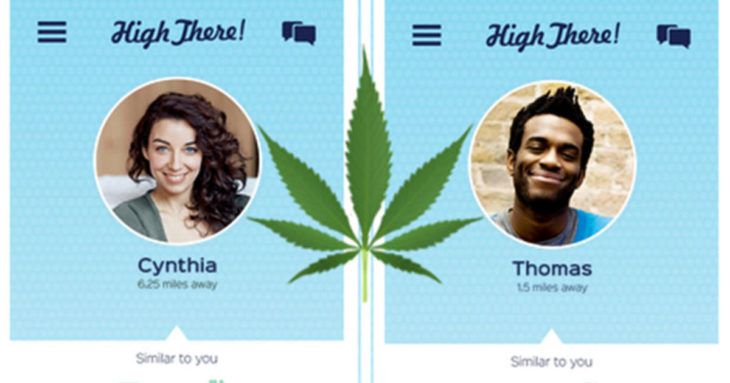 Up until now, I’ve been kind of treating this subject with a certain amount of seriousness, as if there really is a dating crisis being faced by pot smokers, but allow me to be blunt (HAHAHA) about how I really feel: I smoke weed and I would never use High There. As much as I enjoy indulging in a little herbal happy hour when the day is done, I really have no desire to be or date anyone whose identity is so closely aligned with smoking pot. Seriously, people who are all about getting stoned are kind of lame and boring. And honestly, I can’t believe that it’s that hard for weed smokers to find non-judgmental partners. It’s 2015 — how many people still think pot is the gateway drug to heroin and death?

Also, I don’t really care if someone I date also smokes weed. I ideally wouldn’t want to date anyone who really frowned upon it, whatever their reason, but if they didn’t care that I did? Cool. Honestly, smoking pot for me has never been a social thing — I prefer the experience of getting a little stoney alone. It calms my ADHD mind, chills me out and helps me access some of the speedy thoughts that are always running through my brain. The concept of High There is more funny to me than anything — which is why I probably will end up sparking a jay and scrolling through profiles later tonight. Just for a giggle. [Raw Story]

Girl Talk: Bisexuality, Straight Privilege, And A Place At The Table

What are Marijuana Extracts? – 2020 Guide