Hitched: Bridesmaids, What Are They Good For?

Minutes before I walked down the aisle, one of my persons-of-distinction, Trenton, pulled a bunch of multi-colored plastic Tiki goblets from a sack, busted open a bottle of cheap champagne from a cooler, and measured out five healthy pours for the five of us in the little dressing room. Most of my pre-wedding moments are lost in a blur of being late to the venue, jumping into my dress and checking my makeup, but I remember that Tiki toast like it was yesterday.

That moment of support and solidarity is what I always imagined a wedding party is for — not to be put-upon recruits in the business of folding silverware (though our folks cheerfully took on this and many other tasks in turning a Dallas rock club into a wedding venue) but to be touchstones in a stressful and joyful and momentous time.

I had four party-persons stand with me on my wedding day, and looking back, I absolutely wouldn’t have had it any other way. Because of my mixed-gender group— Patrick’s side was similarly mixed — we deemed these (very good looking, if I may say so) folks our persons-of-honor-and-distinction, rather than bridesmaids and groomsmen. They are our favorite people.

Trenton is one of my oldest friends, a guy whose companionship got me through high school, and he married one of the most brilliant women I know, Lauren, who redefines the phrase “never met a stranger.” Then there’s Merritt, the first grown-up friend I ever made as a bona-fide professional lady, who basically taught me how to be a functional adult in the world. And Susan, who has already graced these Hitched pages before, my person-of-honor. She’s my newest close friend — we met in grad school just a few years ago — but our connection was nigh instant.

I didn’t pick any of my people out of obligation, or as some kind of Tour De Andrea’s Social Life. I didn’t pick them just because they were blood relatives or because I was afraid of starting feelings-fires if they were left out. (In fact: I was a bridesmaid in Lauren and Trenton’s wedding and not Merritt’s, but it never even occurred to me to be upset by that — I knew she had old-time friends and a beloved sister she wanted up there with her.) 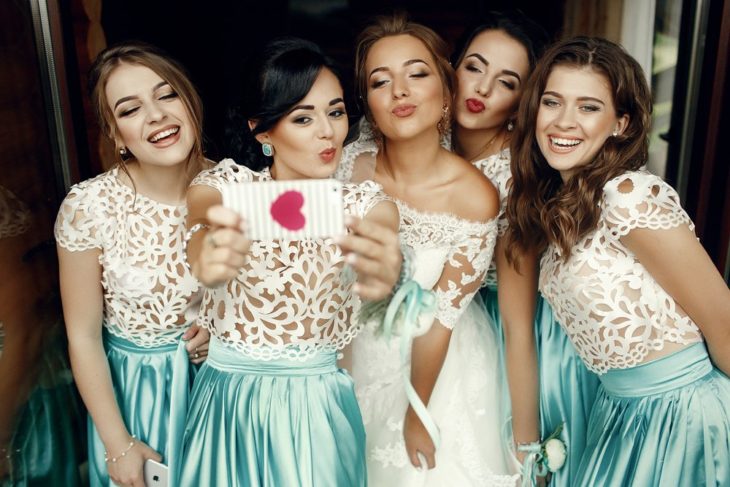 Patrick and I picked our people because they are our people, and because over the years, they are the friendships that have remained the most consistent in our adult lives.

Which raises the question: so, what’s a wedding party for, exactly? Historically, it began as part of a fascinating way to foil the intentions of evil spirits, who would be confused by a group of people surrounding the bride and groom, unsure who to haunt. Presently? It seems to range from, in the worst cases, a grownup Queen Bees And Wannabes moment for remarkably self-involved people, to good friends gathered around to help with wedding-related tasks, to people who simply show up and are handed a bouquet or corsage. Some folks choose one attendant; others choose none at all. It depends on what your wedding means to you and your partner.

For more traditional folks, a wedding party may be more inclusive of family than friends. For others, it may mean only the couple’s two very best friends. And then some—like this writer at the Huffington Post—seem to feel obligated to field a gussied-up baseball team with nine attendants.

The size of a wedding party can quickly go from reasonable to chorus line, and from there to well-dressed firing squad. Personally, I recommend erring on the side of not having to use the choir loft. I’ve been to nine-attendant weddings, and they often look lovely, but they don’t feel very personal. I see nine or more attendants and I think, “Who all are they trying to please?” or “When’s intermission?” 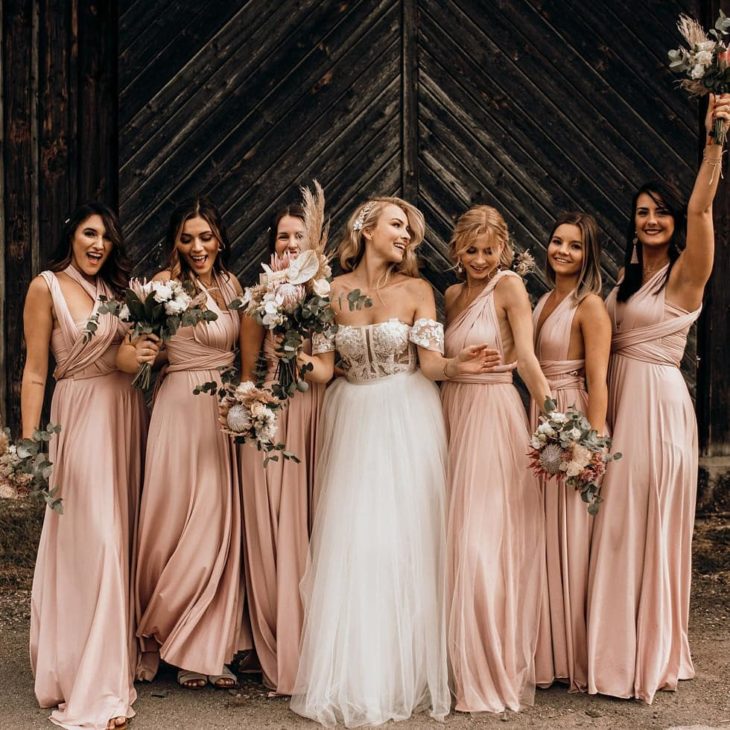 Sure, there probably are people out there who seriously have nine best friends and family members who they just can’t imagine themselves getting married without. But the Wedding Industrial Complex is so strong — especially on women — and encourages people to spend money on a Capital-W-Wedding Show. It can look as if the couple is bowing to (a huge amount of hard-to-avoid) pressure, rather than celebrating the community that will be the foundation for the future of their union.

I asked my friend Lauren, who had five bridesmaids, what she thought the purpose of her wedding party was. Her answer? Pretty close to my own: “I see it as a support system. Weddings can be pretty stressful, so it’s nice to have those friends that you trust and love around you throughout it to keep you sane.” I want to make the case for building your wedding party out of the people who mean the most to you in the aggregate of your life and your relationship, not the “But I threw her a baby shower and she’ll be really upset if I don’t!” person or the “But she was my pledge sister back in the day!” person. Weddings are often difficult and stressful, partly because people feel so much more obligated to “should” than “want to” — and I’m not talking about just for the bride and the groom. The wedding party is often asked to take on quite a bit of responsibility, and not everyone considers it an honor or a privilege so much as an awkward hassle, even with friends they care about.

Choose people you’re already close to who can be there for you in that year, and who can support you on the day. If that already includes your spouse’s half-sister who lives in Brazil? Fantastic. If it doesn’t? You’ve got decades to get to know her. And if she — or some other family member — is pissed because you didn’t include a near-stranger in your wedding party? Tell them they can include all the strangers they want in their weddings, but this one is your call.

Or if your future father-in-law throws a fit because he thinks it’s a little bit fruity for a groom to have a “best woman” instead of a best man? It’s probably at the top of a long list of shit he’s backwards about, and you’ll never make him happy, anyway. Your college roommate who you haven’t spoken to in years beyond a “like” on their latest cat picture? Probably would appreciate an invitation. Probably doesn’t want to fly cross-country to help you fold origami swans. 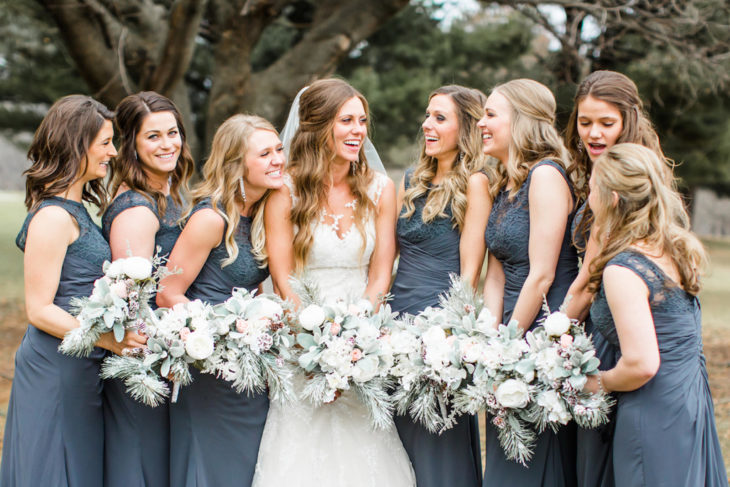 I think brides and grooms will be surprised at who will come out of the woodwork to help them even though they weren’t christened bridesmaid or groomsman. On our wedding day, the venue was abuzz with friends dropping off steamers for tablecloths, hanging garlands, fetching pizza and drinks. One of our friends, Lindsey, even went to the craft store hours before kick-off and bought us a giant bag of new décor because we’d left a whole IKEA sack full of stuff at home, three hours away in Austin. As for Lauren, Trenton, Merritt, Susan, and all of Patrick’s folks, one of whom even powered through it all with a sprained ankle? They did the boring and hard napkin-folding and chair-arranging and tablecloth-steaming, too — and they also answered freaked-out emails and bought us stress beers. What I knew I needed from my wedding party was for them to be people I could trust to get me through the incredibly weird process of having a wedding. They ended up being and doing much more than I could have asked for or expected.

Fundamentally: do what you want and include the people you love. Include the people who you see as being your support system and, by extension, a support system for your relationship going forward. Once you’ve done that, accommodate other people’s reasonable requests when and if it makes sense to do so. Forget “should” and remember “want to and feel good about.”