It’s Time To Cry: Girlfriend Sells Deployed Soldier’s Dog On Craigslist, New Owners Refuse To Give Him Back

As a dog owner — though I really think of myself as a mother to a beautiful dog daughter — this story just breaks my heart. Imagine going out of town and returning to discover that someone you trusted to take care of your beloved pet while you were gone had actually sold that beloved pet instead. That’s what happened to Robby (above), who entrusted his girlfriend with his dog’s care when he was deployed to Afghanistan. Instead, his GF sold his three-year-old Shibu Inu, Baxter, on Craigslist, which has to be the most fucked up thing ever. Robby was able to track down the people who bought Baxter, but the new owners are reluctant to give the dog back because their children have grown “attached.”

Listen, I’m sure they are, but oh well?  I’m just not sympathetic to people who buy animals on Craigslist, for starters, when there are sweet, loving pets in shelters that need homes. Honestly, buying a dog on Craiglist seems shady to me anyway. And yes, I imagine it will be sad for the kids to give this dog back, but life is hard and sometimes we have to make tough decisions that we may not like but are right. If these kids are super attached after just a brief period of time, imagine how attached Robby must be, and how heartbroken he must feel having his BFF sold without his knowledge. And let’s not forget how unfair this is to Baxter — dogs form deep attachments with their owners too. 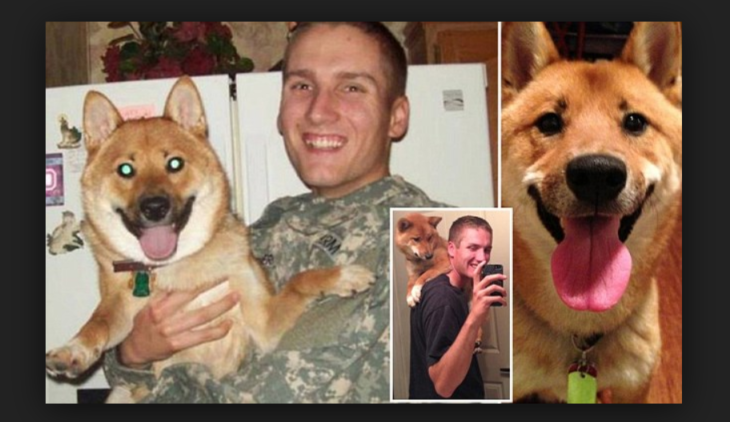 Robby has plenty of supporters, and they’ve started a Facebook page to raise money for a “reward,” hoping to entice the family to give Baxter back to his rightful owner. As supporter Nancy Wallace put it:

“That’s just not something we should let him sit over in Afghanistan worrying about, his dog.He should be doing the job he’s there for and not having to worry about that. He should know that his dog is home and with his family and will be waiting for him when he gets home.”

This Woman Jerked Off A Dolphin — And Liked It!

Good News: Baxter, The Shiba Inu Who Was Sold On Craigslist By A Deployed Soldier’s GF, Is Headed Home!